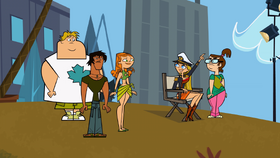 Izzy
War comes to the set as tensions rise between the castmates. As lies and mistrusts continue to plague someone, two people are at each other's throats about who is the better teammate while someone's influential powers start to wear off on two others. In the end, mortal rivals become allies and win the war while someone's disinterest in him is still enough to get her eliminated again.

The episode opens with several castmates waiting in line for the only working toilet on the set. Leshawna offers her spot at the front of the line to Duncan, but he turns it down, stating that he does not associate with liars. She then offers it to Harold, who readily accepts. Duncan then accuses Harold of sucking up to Leshawna, and says that she is no longer on the team. Harold walks in on Owen, who is already using the stall, but Owen reveals that he is constipated. Chef, who has been punished with grunt work, due to his actions in the previous episode, brings him a remedy for his constipation, a puree of fruit and bran. However Owen refuses to take it, so Leshawna drinks it instead, commenting on how she never knew liquid bran could be so tasty.

Chris later gathers the castmates together for the first part of the day's challenge. Harold and Duncan get into an argument over which of them should lead the team, since Harold believes his 'experience' will provide the knowledge required to win, whereas Duncan believes he knows the theme better than Harold does. The first challenge is to jump out of an airplane in mid-flight. Justin tries to convince Beth and Lindsay to jump first, in case he needs something to land on, but his request is rejected by the two, finally getting annoyed with his laziness. Chris, after a call from the producers, pushes a box of parachutes out of the plane, and tells the castmates that they will not be allowed to use parachutes as the scenario is based on World War I, during which parachutes did not exist. Izzy then jumps out; to get Owen to jump, Chris throws a corned beef smoothie out of the plane. Once Owen slides to the door, the weight change on the plane causes everyone on board other than Chris to fall out shortly after. As it turns out, the plane was just a prop on a soundstage and the drop was barely three feet, so everyone comes out unscathed, with Owen ecstatic that he's alive. Chris announces the second part of the challenge: a war using paint-bombs.

The set is pre-divided into two sides for each team, and Chris instructs each team to set up a creative, controlled explosion on their half of the set. Duncan and Lindsay each take control of their teams, although Lindsay has Beth make the Killer Grips' plan. Beth and Lindsay resist Justin's "twelve-pack abs", and force him to work. While the rest of the team argues, Izzy prepares them for war, changing her name again, to Explosivo, or Explosive. Duncan sets off his explosives, which leaves a giant paint splatter in the shape of a skull. Harold compliments Duncan's skills with explosives, but Duncan insults him in return. Izzy's explosion was powerful enough to break the team's safety barrier, but the Killer Grips still lose, as Izzy's explosion was deemed uncontrolled and not creative.

Before the third challenge, Leshawna fans Owen with a leaf in hopes of getting on his good side, which she furthers by downing another one of his liquid bran drinks. Her stomach growls ominously after this drink, however, prompting Owen to note that kind of sound never ends well. The third challenge was a game of capture the flag, with the flag being the "Chest of Mind Blowing Secrets". The Gaffers were given a broken tool shed to defend the chest in, which immediately collapses. Duncan leaves the group to set booby traps. Meanwhile, with the Grips, Beth makes the plan to attack immediately, which Lindsay then repeats to the team. Izzy recommends a "Trojan Taco", but is turned down. The Grips (minus Lindsay), charge to where the Gaffers were, only to find that the Gaffers aren't there, as they are hiding in the hole. It is then when Leshawna notices her stomach is extremely bloated and gurgling loudly: she needs to fart, BAD. Harold and Heather desperately attempt to soothe Leshawna to prevent this, but after apologizing to Harold for lying to him, she can't hold it in any longer and lets it rip. The Grips leave to search, until they hear Leshawna passing gas. The Grips run back, only to be caught in Duncan's trap.

They are catapulted back to Lindsay. When Lindsay and Beth don't care about Justin's scratch, he continues to panic about his looks. Back at the Gaffers, Duncan enters the foxhole to find his team in disarray. Leshawna begins to claim she is feeling better now, but is interrupted by her own butt as it farts loudly, scaring Heather away. The Gaffers try to leave the hole, but Harold stops Duncan from leaving until he admits that he respects Harold's contributions and that they're teammates. Duncan agrees, and the Gaffers retreat. The Grips, still lacking Lindsay, charge at Duncan and Harold, who are carrying the chest and Leshawna. Harold begins to attack with Num-yos, but Duncan turns Leshawna around to fart at the Grips. The gas from her fart acts as a smokescreen, giving Harold an advantage to defeat the Killer Grips. Chris declares the Gaffers the winners of the challenge. The Chest of Mind Blowing Secrets is revealed to be empty, bringing Duncan and Harold to tears.

At the Awards Ceremony, Chris questions the Grips about their teamwork. Lindsay says she wouldn't blame anyone if she went home, except Beth because she needed somebody to blame. Izzy refuses to answer any questions, still calling herself Explosivo. Justin denies being worried about going home, due to worrying causing wrinkles. Beth, Lindsay, and Owen received their awards, leaving Justin and Izzy in the bottom two. Justin receives the final award. Owen tries to kiss Izzy, but she is pulled away by Chef. In the confessional, Justin reveals that he convinced Beth and Lindsay to vote for Izzy instead of him.

Izzy reveals that she knows it was Justin that came up with the plan to vote her off. Surprisingly, Izzy isn't mad at her alleged ex-boyfriend. She also states that she will also not be angry if Owen voted for her, but Explosivo might react differently. She sends a message to Owen, telling him to check under his bed before sleeping, as she has left a paint bomb there. She then pulls out another bomb and drops it.

Leshawna attempts to make up for her mistake by letting others use the toilet first.

Harold comes across a constipated Owen in one of the bathroom stalls.

Owen refuses to drink the concoction Chef has made.

Harold wants to prove that Duncan is wrong.

The campers gather for the challenge.

Chris reveals the theme of the challenge as the war genre.

Chef intimidates the campers while introducing the challenge with Chris.

The cast mates are blindfolded before being taken to the challenge area.

The Gaffers get ready to face the challenge.

Lindsay and Beth are not amused by Justin's joke.

Izzy is unable to push Owen off the plane.

Izzy is the first castmate to jump out of the plane.

The cast mates lose their balance after Owen jumps off.

Owen chasing the drink causes the plane to tip.

Harold falls out of the plane with Heather in tow.

The cast all land safely on a mattress.

Beth and Lindsay plan out when to attack.

The explosives take a little time to detonate...

...but the wait proves to have been worth it.

Justin's powers no longer work on Beth and Lindsay.

"This is my world you're living in, dork boy."

The Trunk of Mind Blowing Secrets.

Leshawna tries to keep Owen cool by fanning him.

The Killer Grips are unable to spot the Gaffers.

"I'm bloating up like a pufferfish. And when it blows..."

"But there's an air baby in there, and it wants to be born!"

The Killer Grips get caught in a net.

Lindsay relaxes, until her team comes back.

Leshawna can no longer hold her gas.

Duncan has an idea for his team to win.

Duncan uses Leshawna as part of the attack.

Duncan and Harold have a look inside the chest...

...but find nothing inside.

Izzy and Justin are in the bottom two.

Izzy is eliminated from the competition.

Owen tries to kiss Izzy before she's taken away.

Justin reveals he convinced Beth and Lindsay to vote for Izzy instead of him...

...and then he flips his hair.

Retrieved from "https://totaldrama.fandom.com/wiki/Full_Metal_Drama?oldid=1644239"
Community content is available under CC-BY-SA unless otherwise noted.