The Tennis Rivals with Pete

David Huband
Gerry was a Total Drama Presents: The Ridonculous Race contestant as a member of The Tennis Rivals with Pete.

A tennis master in the sixties, Pete was Gerry's fiercest competitor and the two have had an ongoing rivalry ever since. Gerry's agent decided it would be a brilliant idea to pair them on The Ridonculous Race, regardless of the fact that time has made them a lot older and less fit. The two men commonly mock each other for fun. Gerry and Pete don't take themselves or anything too seriously and hope they might be able to pick up new sponsorship contracts from their appearance on the show.

Gerry, along with Pete, makes his debut in None Down, Eighteen to Go - Part 1. He and Pete are former tennis stars and were considered celebrities during their time. Hoping to seek a final taste of stardom, the two of them put their past differences aside and join the race. In addition, they believe that their age and experience will give them an advantage over the other teams. True enough, they are the fourth team to reach the first Chill Zone of the show in None Down, Eighteen to Go - Part 2.

Despite their physical skills, their age begins to catch up with them in French is an Eiffel Language, as they fall asleep in their taxi, forget to tell the driver where to go, and are late to reach the first challenge. In order to catch up with the others, they decide to follow the Vegans, whom they assume to be the weakest team physically. Unfortunately, they underestimate them and are overtaken in the end. Eventually, the Tennis Rivals are the only team left and barely make it to the Chill Zone just as the penalty for the Reality TV Pros is over. However, Don declares that the Tennis Rivals are eliminated as Gerry's foot is just outside the carpet. This angers Gerry, and though he argues with Don over his ruling, he accepts his loss and leaves with Pete.

Gerry and Pete reappear in the finale, watching the final two teams compete for first place. Both of them show little interest in either team, making fun of them in an interview. After the winner is declared, Gerry is seen in the final group shot.

Gerry pointing at something.

Gerry has got an idea. 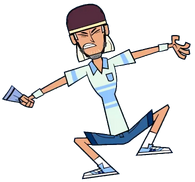 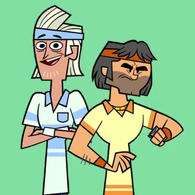 Pete is introduced alongside his partner.

Gerry watches in amusement as Pete breaks his artificial knee.

Gerry smiles after he pushes Pete off the zip-line.

The Tennis Rivals get thrown off a camel when it suddenly stops.

The Tennis Rivals laugh at their own jokes.

...and mock them when they gain the lead against them.

The Tennis Rivals fall behind as they struggle to move their cheese wheel.

The Tennis Rivals crash into the Reality TV Pros while jumping to the Chill Zone.

The Tennis Rivals joke about the final two teams.

Retrieved from "https://totaldrama.fandom.com/wiki/Gerry?oldid=1624112"
Community content is available under CC-BY-SA unless otherwise noted.