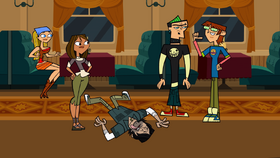 Cheese puffs, a movie with a friend

Lindsay
It is crime-solving time on set as the cast participates in three mystery-themed challenges. As one castmate starts to apply herself, another castmate continues to be fed up with them. As a result, these two find themselves butting heads quite often. To make matters worse, the host is found dead on a moving train, and the murderer seems to be amongst them. In the end, someone wins a reward and uses it to make someone else jealous, asserting their strategic prowess.

Lindsay compares going to the movies with Duncan with ordering the "Mega Combo" at the movies. At first, everything is working out fine; Courtney is losing her mind, Duncan is "pretty okay" most of the time, and the butter is glistening off the popcorn. But she then states by the time the previews are over, she's already finished both her popcorn and drink and starts to feel sick.

Courtney refuses to give her PDA for the flash drive, but Duncan takes it from her.

Duncan and Lindsay use Courtney's PDA to watch Chris's message.

Chris addresses the castmates with a message.

Duncan doesn't care about the challenge...

...and neither does Harold.

Lindsay thinks of a wildly incorrect solution to Chris's clues.

Courtney explains the clues to everyone.

Everyone follows Courtney, and no one listens to Lindsay's idea, not even Beth.

The castmates arrive at the bank vaults from Ocean's Eight - Or Nine.

Courtney inputs the code from the clues she figured out earlier.

Chris spits out the black licorice he was chewing.

Harold brings up his solar powered train set back home when Chris mentions the train.

Chris explains the first part of the challenge to everyone.

Courtney demands a prize from Chris.

"I am going to get a prize, I promise you that."

Duncan mentions that anyone can get his details at the provincial police headquarters.

Courtney and Lindsay argue back at the trailers.

Courtney scams Lindsay to get her DNA.

Harold thinks he is successful with his plan against Duncan...

...until Duncan grabs him and takes his DNA.

Duncan catches the barrel before it falls on him.

Beth tells Lindsay that her retainer fell into her spaghetti...

...only for Beth to reveal that it was a trick to get Lindsay's DNA.

Beth says that she felt guilty for manipulating Lindsay...

...right before Harold gets Beth's DNA.

Courtney and Duncan eat dinner together.

After having dinner, Courtney gets Duncan's DNA.

Harold, Duncan and Beth give their collected DNA samples to Chris.

Lindsay has no DNA.

Courtney has two bags of DNA.

Courtney whines to Chris in order to receive a prize.

Chris gives Courtney a bag of cheese puffs to get her to stop whining.

The cast is riding in a train for the challenge.

Chef brings in a cart of snacks for everyone.

Lindsay gets excited to see all the food.

Courtney gets mad at seeing Chris dead, knowing it is fake.

Harold gives Chris CPR, being disgusted by it.

Beth and Harold start running around in horror.

Duncan tells Harold and Beth to "get a grip".

Harold tries to find the murderer.

Lindsay explains what she did on the bus to cheering camp.

Beth says that she was curious where Lindsay was going with the story.

Lindsay's story turns out to be pointless.

Courtney asks if anyone besides Lindsay has any ideas.

Harold suggests calling the train's conductor, but no one answers.

...which makes Harold cringe with every kick,...

Courtney tries to call her lawyers, but she gets no reception.

Courtney tells Duncan to go through the emergency exit and see if the train is real, which Duncan protests.

"Because you're the only one that can handle it."

Duncan climbs out and sees that the train is real and moving.

Duncan begs for the others to open up the hatch again before he crashes into an overhead tunnel.

Harold brushes up against Lindsay's legs when the lights come back on.

Duncan falls out of the hatch and assures that the train is real.

Lindsay mimics Harold, saying that she doesn't want to be murdered either.

Harold finds one of Duncan's green hairs, then plays dramatic music on his keyboard.

"These nitwits think you did it!"
– Courtney

Beth explains that Duncan wasn't present when the corpse disappeared.

Duncan tries to defend himself, but he is unsuccessful.

Beth pulls out a pair of handcuffs from Chris's bag.

Harold, Beth and Lindsay all think Duncan is the murderer.

Harold explains his reasoning in the confessional, then plays his keyboard.

Courtney apologizes to Duncan about the other three's imprudent actions.

Lindsay tells Harold and Beth to search for evidence.

"I could be just as right about this as anybody!"
– Lindsay

Courtney checks what she is having for breakfast on April 22nd.

Harold and Courtney open the bottom of the train.

Harold looks for a way to stop the train.

Courtney and Harold assess the situation.

Lindsay gets distracted while looking for clues.

Harold throws down a soda bottle and gets sprayed.

Harold gets the feathers of a pillow attached to him by accident.

Lindsay finds evidence on the floor.

Lindsay finds a napkin with orange fingerprints on it.

Lindsay explains why Courtney is the "murderer".

Harold and Beth pursue Courtney after she was found guilty as the murderer.

Chris walks back into the train, surprising everyone except Courtney.

"Detective Chris" with his replica.

Chris declares Lindsay the winner for cracking the case, and her reward is that she gets to go to the movies with a friend.

Beth gets excited to go to the movies.

Lindsay chooses Duncan to watch a movie with, much to Courtney's jealousy.

Beth says that she would be upset about not going, but admits that Lindsay made a smart move.

Courtney's jealousy gets the better of her in the confessional.

Chris watches a film with his replica, before signing off.

Retrieved from "https://totaldrama.fandom.com/wiki/Get_a_Clue?oldid=1631570"
Community content is available under CC-BY-SA unless otherwise noted.