Devin, DJ, Geoff, Taylor, Tyler
The goat is a hollow-horned, bearded mammal, originally indigenous to mountainous areas. There is one particular goat, that first appeared in Walk Like An Egyptian - Part 1 as Team Chris Is Really Really Really Really Hot's prize, that keeps making reoccurring appearances throughout the series. It can be distinguished by the red ribbon bell around its neck.

In Hook, Line, and Screamer, after Owen falls off the edge of the cliff, he proceeds to land on a variety of objects, the goat being one of them.

In Riot On Set, Gwen mentions that she had a job at the petting zoo and she had to clean up after the goats. In the same episode, Duncan, while acting, mentions a goat that his character had in their youth.

The goat appears very briefly in Owen's animation form during The Aftermath: III. When Owen is mentioning all the bad things he's done, he mentions stealing his Uncle Max's toupee and gluing it to a goat's backside at a petting zoo. It only appears in cartoon form.

In Walk Like An Egyptian - Part 1, the goat is the prize that is awarded to Team Chris Is Really Really Really Really Hot for coming in second place in the pyramid challenge. The goat appears to be quite aggressive because as soon as Chris introduces it, it headbutts Tyler.

In Slap Slap Revolution, Chris orders a vicious, rabid goat to charge the contestants. However, it encounters one of the local goats, which is much bigger and seemingly more ferocious. In an instant, the small one eats the larger one, then resumes its attack. During the challenge, it attacks Team Victory and Team Chris Is Really Really Really Really Hot. Leshawna helps Lindsay avoid injury, while DJ catches it. He holds it in the air and the goat hits a tree branch that they pass under, and gets left behind.

In Aftermath: Revenge of the Telethon, the goat is seen in a segment called "DJ's World Of Animals." DJ tries to pet the goat, but it ends up hurting itself from trying to break free of the cage. Once Blaineley, in an attempt to raise money for the show through ratings, sets them free out of their cages. All of the animals attack everyone in the studio, with the goat ultimately attacking the camera and Geoff.

In Sky Fall, a goat can be seen eating plants. Later, it is chased by the robotic alligators, resulting in it getting eaten.

In Brazilian Pain Forest, a goat appears on the plane full of animals, which the second set of contestants ride on. After Taylor decides to quit the game, she kicks the goat. Seconds later, it takes revenge by headbutting her.

In Darjeel With It, a goat appears on the train car ahead of the Best Friends. When Devin tries to tell Carrie his feelings for her, a goat interrupts the moment by headbutting him.

In a flashback of Snots Landing, Courtney brought a goat named Harry to one of her past show-and-tells. When Courtney scared Harry, he screamed and ran out the building. 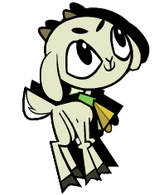 The goat, seen with the camel, in Walk Like An Egyptian - Part 1.

The goat charges towards Tyler.

Alejandro with the goat.

The goat during Rowin' Time.

...with an unlikely winner.

The goat appears in Sky Fall.

...and it headbutts her in retaliation.

Courtney brings a goat to show and tell.

The goat gets scared by Courtney.
Retrieved from "https://totaldrama.fandom.com/wiki/Goat?oldid=1579770"
Community content is available under CC-BY-SA unless otherwise noted.