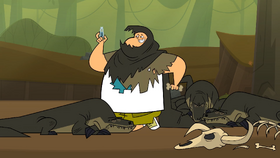 The teams head to Indonesia to face deadly Komodo dragons and search through rugs to continue. One team finally meets their match against something tougher than them, while another likewise face difficulties and someone's manipulative ways once again fail against another team. With someone distracted by another, his partner tries to do all the work; but a mishap at the end leads to these two departing from their latest adventure.

The episode begins with the Surfer Dudes, who won in the last episode, starting off to the Don Box. In an interview, Geoff makes an ice swan statue to thank the Ice Dancers, whose failed attempts at manipulating them inadvertently made them a stronger and better team. Meanwhile, Josee fumes that her plan backfired while Jacques claimed that the Surfers "don’t have minds to play with". Stephanie goes on a rant about how Ryan is at fault for making her boomerang their team, but to her surprise, he agrees. Ryan then explains he figures he can one-up Stephanie by always agreeing with her. Brody takes the tip, and Don announces the next location is Flores, Indonesia. Teams must fly to Flores, then take taxis to a village inhabited by Komodo dragons. There are initially three flights to Flores, but the narwhals get revenge for the ring-toss challenge by popping the tires on two planes and even attacking the Ice Dancers. Don quickly tells everyone to get on the final plane before the narwhals got it too. Soon enough, all of the teams make it to the next location and race to get a taxi as the Ice Dancers almost get run over by the plane.

The Reality TV Pros try to get a taxi when Emma offers to share hers with them. In another confessional, Kitty expresses joy for Emma liking Noah after her last break up. However, she reminds Emma to focus on winning the game. Noah is happy about his arrangement to date Emma, no longer caring if he gets eliminated. The moment is ruined when a dragon attacks their taxi. The Sisters, Reality TV Pros, and Best Friends arrive first. All intimidated by the Komodo dragon blocking the Don Box until the Surfers arrive and honk the taxi to get the creature away from it. The next challenge is an All-In where the teams have to collect one vial of Komodo dragon drool, which has deadly venom in it and give it to the local for the next tip. Devin is still going through his depressed stage, piquing the interest of the Goths. Kitty, yet again, tries to get Emma back on track for winning the game. She claims Emma is distracted by Noah, something that she and Noah agree on. Attempting to get drool from the Komodo dragon, the Surfers struggle as they believe Komodo dragons breathe fire and become cautious. The Daters try to lure the animal but resulting in Stephanie to be chased by one. The Reality TV Pros wait it out as they plan to collect spit from the bones of a dead carcass.

At this time, Noah goes back to check on the Sisters. Owen expresses concerns about how Noah doesn't care about the Race anymore, and realizes he needs to take charge to win the challenge. The Cadets and Ice Dancers are the last to arrive as everyone else continues through the challenge, having trouble collecting spit from the Komodo dragons. Meanwhile, Devin has finally moved on from the break-up, and Carrie waits for an opportunity to confess her love. After finding a molted pelt, Owen gets the idea to use it and trick the reptiles into thinking that he is one of them. Meanwhile, MacArthur tries to capture a Komodo dragon for spit like she captured bunnies in Australia. However, this backfires as they are attacked, forcing her and Sanders to climb a tree for safety. Josee and Jacques attempt to swipe some Komodo spit from the bones from one of them, but Jacques slips on a puddle of drool and ends up inches from the dragon. The Komodo dragon is about to attack them, but the Goths arrive, causing the dragons to flee in terror. Crimson reveals she and Ennui are wearing Komodo-dragon musk, which they refer to as "Komodo-rant".

Owen, in the pelt, crawls to the other Komodo dragons as he tries to blend in, causing one of them, who he names Chewie, to fall in love with him and pin him down affectionately. Geoff and Brody assault a Komodo dragon with a fire extinguisher and spray it to collect the venom. The Komodo dragon coughs up foam from the extinguisher, which the Surfers mistake as its saliva. Back in the tree, fearful for their lives, the Cadets confess secrets to one another. Sanders' biggest regret is that she wasn't charged for her fries at a fast-food restaurant and never went back to pay. MacArthur, on the other hand, has a long list of past sins that would get her fired from the academy, including the fact that she uses a fake name, and her real name is "Valentina Escobar", causing Sanders to panic. When Geoff and Brody attempt to turn in the Komodo's saliva, Don checks it out and forces the Surfers to go back with the threat of elimination if they try to cheat again.

Jacques is nervous about facing the dragon but reminds himself that he dealt with Josee for years. Josee overhears this and glares at Jacques as he attempts to get venom, failing again due to a stampede of Komodo dragons thanks to them repelled by the deodorant worn by the Goths. Josee gives up on the challenge and goes back to sabotaging the other teams, much to Jacques’s disapproval. The two try to manipulate the Goths, to no success. The Goths manage to get their venom easily thanks to Loki, filling up a bucket with it. Josee and Jacques using the Goth’s leftover bucket of drool from the Komodo Dragon to get theirs. The Goths are the first team to officially finish the challenge and get the next tip, which is another All-In challenge; to find a branded Ridonculous Race rug out of a massive pile of rugs. After finding this, they may then make their way to the Chill Zone. Meanwhile, Stephanie is stuck in a tree as the Komodo dragon tries to eat her. Ryan shrugs her off as he reads a magazine. Angered by Ryan’s unwillingness to help her, she breaks a tree branch, and whacks the Komodo dragon multiple times and threatens Ryan to collect the drool. Still stuck in the tree, MacArthur goes on about her past offenses. Sanders cries for help with her partner joining in,  both hugging onto the tree tightly.  The Surfers are about to snag another Komodo for venom until Brody hears MacArthur's cry for help. He and Geoff run to help the Cadets and attempt to attack the Komodo dragons only for them to end up in the tree too. The Goths are the first team to arrive at the Chill Zone with Josee flipping out after she and Jacques end up in second place. In the interview, Josee expresses her rage over the Goths "mocking them."

The Cadets and the Surfers, still stuck in the tree trying to get down. MacArthur offers her armpit hair to help, grossing Sanders out, but manages to use it to escape. Noah tries to wake up Chewie, but Owen frees himself by farting, which makes Chewie run away, but not before a drop of drool gets into Owen's eye. The Cadets and Surfers then lure a Komodo dragon by riding a taxi to trap it and get the venom. The three teams race to the next challenge. Noah ends up buried under a pile of rugs, and Owen is unable to find him due to his swollen eye. The other teams find their rugs, with the Cadets placing sixth and the Surfers taking seventh. Owen tries to get Noah out of the rugs, but Don comes up to him and tells him that he and Noah are in last place and they are eliminated. Emma manages to find Noah and tells him to meet her at the final Chill Zone when she wins and proceeds to kiss him. As they leave, Owen asks Noah what show they should do next, but Noah reminds him they were asked to do the next season of another show they previously participated, the name of which was stated after he was cut off.

Geoff made a nipple carving for the Ice Dancers.

Ryan finally figured out how to mess with Stephanie's mind.

Josee doesn't want to take the same plane with the other teams.

Kitty gets annoyed by Emma's behavior.

The Surfers have arrived.

Ennui wants Devin to hang out with him and Crimson more.

Kitty asks Emma if they could race without Noah and Owen.

The Surfers think the Komodo dragons are real dragons.

Stephanie yells at Ryan for not helping her.

Owen has a plan as to how to get Komodo dragon spit.

The Cadets try to get Komodo dragon spit.

The Komodo dragons are scared of the Goths.

Devin has reached a new stage of heartbreak.

Owen tries to get venom by wearing dragon's skin.

Owen gets the venom.

The Surfers use an extinguisher to get the venom, believing that the Komodo dragons breath fire.

The Surfers think they got a venom.

Sanders confesses her secret to MacArthur.

Don notices the Surfers' venom is an extinguisher foam...

...so he warns them that if they do something like this again they'll be out of the race.

Jacques tries to get venom.

Josee decides to start destroying the other teams.

The Ice Dancers try to trick the Goths.

The Goths get the venom thanks to Loki.

The Ice Dancers take the rest of Goths' venom.

The Goths are the first to finish the first challenge.

...so she beats up the dragon with a stick.

The Surfers try to save the Cadets, but end up on a tree too.

Goths and Ice Dancers in the second challenge.

The Goths come in first and The Ice Dancers come in second.

The Haters search for the rug.

Brody kisses a bit of MacArthur's hair, not knowing it is from her pits.

Thanks to Owen's fart, the Komodo dragon leaves them.

The Surfers are shocked when they learn that the Komodo dragons don't breath fire.

The Surfers and Cadets get the venom thanks to Brody.

The Cadets come in sixth and The Surfers come in seventh.

Owen and Noah are eliminated.

Emma hugs Noah after his elimination.

Retrieved from "https://totaldrama.fandom.com/wiki/Got_Venom?oldid=1631113"
Community content is available under CC-BY-SA unless otherwise noted.