Harold is one of the children attending Happy Tots Daycare Centre.

Like his older self, he is nerdy and awkward but still rather intelligent. He studies and takes being a ninja seriously to the point of believing he should be the only one in the daycare.

In Free Chili, Harold mistakenly believes Owen's chilli dog with a walkie talkie inside is an alien invader. He and Jude fight over what to do with the alien, with Harold recruiting Izzy to interrogate it and keep it away from Jude.

In A Ninjustice to Harold, Harold suffers an identity crisis when Beth shows potential to be a ninja and everyone praises her for it. He decides to challenge her for the title of "class ninja" and she accepts when he insults her bee costume. During the Class Ninja Battle Challenge Royale, he ends up losing in every event and forfeits before taking on the last challenge, only for Beth to concede the title to him stating she never wanted it. While the two make up however, Harold ends up going through the last obstacle by accident and survives much to the amazement of his friends, though his fears start all over again when Bridgette shows quick reflexes worthy of making her a ninja.

Harold before Duncan scares him.

Harold chopping something in half. 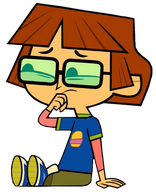 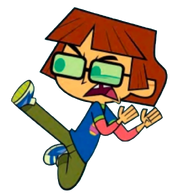 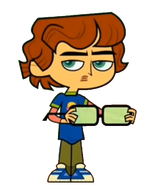 Harold without his glasses.

Harold pretending to be a pirate.

Harold explains that Izzy and Jude have took more than the daily amount of sugar needed for four year olds.

..but gets beaten up.

"Stand back! Let a ninja handle this!"
- Harold

Harold and Izzy hiding in the castle.

Harold talking to what he considers to be an alien.

Harold wants to save the world from the alien.

Harold cleans up Richard and his bowl.

Harold calls for a corner piece..

The kids licking up all the germs in the bathroom.

Harold wants Owen to take care of his pet sandwitch.

Harold refuses to be a bad guy.

Harold kicks Chef's phone out of his hands.

Harold tells the kids that he brought them pudding.

Harold tells the kids he's the class ninja, not Beth.

Harold gives out dishes to monks.

Harold agrees with what a monk said about him.

"A real ninja can do anything he puts his mind to."
- Harold

Owen throws a bucket of sand onto Harold's head.

Beth, Cody, Leshawna and Harold sing a song about Christmas.

Harold gets scared by Izzy.

The kids try their best to get outside the daycare.

Bridgette and Harold eliminate each other from the paintballon battle challenge.

Harold searches for Courtney's couch in the toilet.

Harold tries to pick Courtney's couch out of Beth's nose.

Harold gets his ninja toy back.

Harold and Jude used the last chapter of Courtney's book to make goldfishes out of paper mache.

Harold is angry at Noah and Owen for making him eat spit.

Harold's reaction when Courtney tells him that he, Jude and Owen can help her.

Jude and Owen make a video about Harold.

An aircraft pilot's reaction when he sees Harold.

Harold thinks that when there's fire, people should use kung fu.

"You gotta respect that hat! You gotta!"
- Harold

Harold plays with his robot toy.

Beth thinks the first snowfall of the year means Harold getting his tongue stuck to a pole.

Harold is surprised that Beth was gonna let Owen go to the Gum Dungeon.

Harold gets scared by Duncan.

Harold says that the aliens will never take his brain away.

Harold puts a green bean in his nose.

Harold comes up with a plan as to how they can save the planet.

Leshawna uses Harold as a footstool.

Harold accidentally kicks himself in the face.

Beth shows Cody and Harold the everything horse commercial again.

Harold gets scared when the door behind him opens up.

Harold blames what he did on Hoppy.

Harold is angry at Beth for knocking his blocks over.

Harold asks Beth what is she holding.

Izzy sees Harold without his glasses on.

Without his glasses, Harold is unable to see correctly, so he accidentally walks out of the daycare and falls off a building.

"This teddy's a lot bigger than I remember."
- Harold

Harold tells Izzy that he got mauled by a bear.

Harold made breakfast for his mother with eggs, bacon and toast shaped like his face.

Harold is sizzling his Mother's Day card out of marble.

Harold wonders if Sparkle-landia has dragons in it.

Harold decides to set traps so that he can catch Bigfoot.

Harold wants the kids to help him with the traps.

Harold tells the kids that he was at the dentist.

Beth and Harold dress up as a married couple to fool MacArthur.

Harold wonders how come Owen is no longer acting like a dog.

Harold talks about his dinos before getting attacked by Lenny.

A monkey gets rid of Harold's hair.

Harold's reaction when he sees Steve taking the hats off of the other gnomes.

Harold turns into a statue.

Harold claims that Duncan never listens to him when he says something bad is gonna happen.

Harold is mad at Duncan.

Harold thinks that him and Duncan are lost.

Harold opens up a portal.

Harold's sure that the stick Owen found is not a magic wand.

Harold's reaction when he hears that magic is fake.

Harold wonders what will happen to him next.

Harold considers this to be his worst day ever.

Beth finishes her painting of Harold.

Harold is suprised that Owen managed to to turn rough dough into a fully cooked pizza.

Maude gives Harold a time out.

Maude glues Harold to the wall.

Harold wants to build a sandcastle.

Harold begins to play some music.

Harold gets scared by Gwen.

Harold wants to get into Chef's bathroom.

Harold is unable to open the bathroom's door.

Harold draws a face on a toilet paper..

Harold plays basketball with himself.

Harold apologises to Mr. TP for what he did.

Harold comes up with a plan as to how he can get out of the bathroom.

Harold tells Leshawna that he will get her tooth out for her.

Harold uses his ninja moves to get Leshawna's tooth out of her.

Max talks with Harold.
Retrieved from "https://totaldrama.fandom.com/wiki/Harold_(Total_DramaRama)?oldid=1643170"
Community content is available under CC-BY-SA unless otherwise noted.