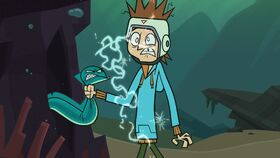 A ride in the extremely luxurious first class section

The remaining teams travel to Hawaii! Someone loses their good luck charm and finds something else which proceeds to cast a curse on their team while someone shows an infatuation with another and someone else tries to express her interest in someone who just won't give her the chance. Another is finally fed up with her teammate, leading to a fall out while a long argument and someone's aggressiveness leads to a break up for a certain couple who end up coming in last, but are given a second chance in the race.

The episode begins with the teams getting ready to take a donkey cart to Hawaii. The Sisters and Reality TV Pros try to pass the time with a game of charades, where Kitty is clearly showing a camera, but Owen continuously gets the answer wrong, usually giving a food-related answer. Eventually, Emma snaps and gives the answer to Owen, asking Noah how he deals with Owen. Noah hears nothing, due to his infatuation with Emma. Owen notices that Noah has been acting strangely as of late. Meanwhile, Father and Son board their donkey cart with the Stepbrothers. Dwayne discusses how lucky and grateful he is that he can spend quality father-son time with his son, while Junior comments on the immaturity of the Stepbrothers, wondering how old they are due to their incessant bickering. Mom and Daughter are on the same cart, and Taylor tells Junior that he is lucky he gets to compete with his father. Kelly describes Taylor as a "daddy's girl", and Taylor says it is because she can relate with her father more than her mother; they both enjoy being successful, and both of them hate avocados. While some teams try to deal with family time and relationships, the Goths are devastated at having to leave Transylvania and aren't willing to go to Hawaii, due to the climate change and the positivity. Stephanie's competitiveness starts to get on Ryan's nerves and this strains their relationship further.

After arriving in Hawaii by plane, the teams are greeted by a local. Don explains that the Hawaiians value their traditions, as a local tries to put a flower necklace on Jay. Jay avoids her as the Adversity Twins reveal that Jay is allergic to the species of flower that the local is giving them. When Jay has a flower necklace on him, he begins to sneeze. In an interview, the the Twins talk about how the Hawaiians really value their traditions, as Jay continues to suffer from allergies. The teams must compete in a Botch or Watch, where whoever didn't do the gymnastics challenge in Romania has to dive for a wedding ring in one of the famous honeymoon bay areas of Hawaii, from where they must swim to the beach to meet their partner. As the first seven teams dive for the rings, Jacques ultimately manages to grab the first ring, giving the Ice Dancers an early lead. Josee finds a new good luck charm, a lava rock shaped like a trophy, although a Hawaiian man states that she cannot take anything off the island. Josee ignores him, and exclaims that Hawaii has entire volcanoes full of rocks; taking one won't make a difference and takes the rock. Meanwhile, some of the teams have managed to find the rings, while others don't have quite the results they expected. Stephanie and Kitty set their sights on the same ring but their fight is interrupted by a shark, which Stephanie fights with, giving Kitty enough time to get the ring and make her escape, angering Stephanie.

Upon seeing Carrie's reaction towards Devin, Kitty immediately discovers her crush and talks to her about it. Kitty reveals that she has a strong "love" radar, and it has been pinging a lot lately, which makes Emma walk away when Kitty begins to make "alarm" noises. The Ice Dancers are the first reach the location of their next challenge, which is an All-In. In this challenge, the teams must now walk across blistering hot coals, while one teammate wears a grass skirt and the other teammate wears a maile lei. If either of the outfits catch fire, the teams must start all over again. After completing this challenge, the teams must race on foot to the next Chill Zone. Meanwhile, the other teams are still searching for the wedding rings, with some of them getting electrocuted by electric eels or having ink squirted on their face by an octopus. Noah finds two rings, and begins to head for shore. However, before he does, he notices something is dragging him down. Initially thought to be a shark, it turns out to be Mickey, who desperately wants a wedding ring. Noah groans, saying that he wants to sell the second one for cash, but gives it to Mickey anyway. Owen however, upon seeing Noah's recent change in behavior, from not making a sarcastic remark to acting nicely towards Mickey, believes that his partner is dying. In an interview, Noah states that he has not grown soft, but rather gave the ring to Mickey due to how pathetic he looked, but eventually went on a tangent about Emma.

As the teams get ready to compete in the All-In, Carrie uses the opportunity to consult Kitty, who has also helped Owen figure out why Noah hasn't been acting like himself lately. Kitty tells Carrie that life is short, and if she likes Devin, she should tell him. Kitty also mentions that Devin is attractive. Meanwhile, the Daters are still stuck on the first challenge, where Stephanie's anger has finally gotten to Ryan and he threatens to leave. While Mom and Daughter are delayed due to Taylor's exceptionally slow swimming, the other teams have reached the location of the All-In. Kelly claims that Taylor is a tad faster with a flutter board. In the All-In, the Stepbrothers argue who does what. For Father and Son, Junior tells his father that he cannot wear the grass skirt. Dwayne reasons with his son, saying that if he wore the skirt, Junior would have to lift him. Junior tells Dwayne that a kid at his school with the last name "Finkle" got shoved into the girls' locker room for a year, just because his last name rhymes with "tinkle", and proceeds to lift his father up. For the Surfers, Geoff diverts Brody's attention by talking about events relating to the cold that had taken place in the past. This teamwork leads to the Surfers to be the first team to arrive at the Chill Zone after completing the All In. Later, the Ice Dancers and Best Friends race to the Chill Zone, but due to Jacques tripping over a lava rock, the Best Friends get second place while the Ice Dancers are devastated due to getting third place.

As more teams begin to arrive at the Chill Zone, the Goths fall behind due to Crimson refusing to wear the skirt until she colors it in with a black marker, with Ennui telling the audience that Crimson must wear black, no matter what it is, even if it is grass. Mother and Daughter have a falling out, due to Kelly finally becoming fed up with her daughter's attitude. She reveals that Taylor does not have any talents or skills whatsoever, all of her trophies were bought by her father from a trophy store, and that her coaches were paid to lie and compliment her, and that every achievement of hers, down to her beauty pageant victories, are fake, bought with all the money their family has. Carrie tries to tell Devin about her crush on him, but refrains from telling him after he tells her that he loves how they're best friends. While Stephanie throws a temper tantrum upon learning that she and Ryan are the last team to arrive. Ryan uses the opportunity to break up with her, and Stephanie begins to shout at Ryan for breaking up with her on national television. Don interrupts their argument, and tells them that they are still in the game due to it being a non-elimination round.

The Ice Dancers are very excited to be going to Hawaii.

Lorenzo, Chet, Kelly and Taylor on the cart.

Everyone but Sanders is amused by the donkey's farts.

The Best Friends, the Goths and the Adversity Twins on their donkey cart.

The Goths are upset about leaving Romania for Hawaii.

The Daters are in the last cart.

"YOU ARE THE WORST!"
– Stephanie

Stephanie reveals her true competitive side.

A local offers a lei to Jay.

Josee panics when she realizes she lost her rabbit foot.

...but then pushes her into the water.

Kitty is angry at Emma after shoving her to the water.

Carrie crashes with a rock while attempting to dive.

Geoff and MacArthur dive into the water.

Taylor belly flops into the water.

The Adversity Twins arrive at the dock.

Josee ignores the warnings of a local.

..and manages to get the ring.

Kitty teases Emma about someone crushing on her.

Taylor "swims" to the beach.

Noah realizes the "shark" was Mickey.

Noah takes sympathy on Mickey and gives a ring to him.

Noah talks about that he's been distracted by Emma, because he's falling for her.

The Ice Dancers are doing well in the coal challenge at first.

Jacques drops Josee after his skirt gets set on fire.

Jacques runs, because his skirt's on fire...

The Surfers are the first to complete the fire walk.

Kitty tells Carrie that she should tell Devin about her feelings.

Kitty talks with Owen about Emma and Noah.

Junior explains why he can't wear the skirt.

The Surfers celebrate their victory.

Don enjoys a Hawaiian coconut drink while waiting for the teams to arrive.

Jacques trips at the last minute, allowing the Best Friends to come in second. 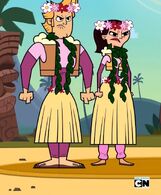 Jacques and Josee are unamused about getting third place.

The Sisters and Reality TV Pros in the challenge.

The Stepbrothers and Father and Son arrive at the Chill Zone.

The Rockers arrive at the Chill Zone.

Carrie's reaction to learning that Devin thinks of her as a friend.

After getting last, Stephanie and Ryan break up...

...only for it to be revealed to be a non-elimination round.

Retrieved from "https://totaldrama.fandom.com/wiki/Hawaiian_Honeyruin?oldid=1632234"
Community content is available under CC-BY-SA unless otherwise noted.