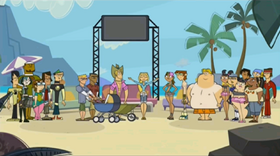 Who You Gonna Root For?
I'm Winning This

Surf down mountain and put lei on the appropriate spirit animal

A possible advantage for one of the final three

The Aftermath show reveals the location of the finale: Hawaii. The four recently eliminated contestants are brought out. Before the peanut gallery is split into three teams and a final challenge is revealed; a representative of each team competes in a surfing competition to win the finalists a possible advantage for the finale. One host regains his co-host, but with some added company.

Geoff and the peanut gallery are in the secret location for the finale of Total Drama World Tour, which is revealed to be in Hawaii. Due to lack of time, Owen, Courtney, and Duncan are introduced simultaneously, much to Courtney's annoyance as she enjoys the spotlight, and did not want to be introduced with Duncan. She asks if she can sing because she's been working on her own song, but Geoff cuts her off to introduce Blaineley, who is bandaged head-to-toe and wheeled in on a dolly.

Beth wonders what Geoff did to her, but it turns out she had a brutal fall through the roof of a Chinese hut when she took the Drop of Shame without her parachute on correctly when she got eliminated in Chinese Fake-Out. Geoff also mentions that Bridgette is back, after a long boat ride, due to having Blaineley's passport, and she surfs up to the set. Behind her, Bruno also surfs up, which frightens the cast, as they think that the bear is trying to hurt her until they learn that he became quite attached to her after she nursed his hurt paw. Whenever Geoff tries to get close to Bridgette, Bruno lashes out at him, causing Bridgette to scold him.

Bridgette gives a run-down of the final three contestants, reviewing their past performances and predicting how they might do in the finale, including a duet between her and Geoff, as they sing Who You Gonna Root For?. Geoff adds commentary and draws on their pictures in an attempt at humor. The gallery splits off into teams, based on which final contestant they support. Lindsay, Tyler, Courtney, Katie, and Sadie all join Team Alejandro; Duncan gives Blaineley a Team Heather pennant, which she cannot refuse, due to having bandages covering her mouth. Everyone else (except Izzy) join Team Cody. This leads up to a challenge to give a reward to the team's contestant. Bridgette, after learning that Alejandro has five supporters and Heather has only one severely injured supporter, forces Justin, Eva, Leshawna, and Owen to join Team Heather, much to their annoyance. Courtney volunteers for Alejandro, Harold steps forward for Cody and Blaineley is nominated for Heather. The challenge is for the contestant to run up the hill, grab a lei and surf back down the mountain past an actively erupting volcano. Learning of this, Owen volunteers to help Blaineley up the hill.

Each contestant is asked to choose an animal which represents their contestant's spirit animal. Blaineley points to a Doberman, with Owen's confirmation. Harold, noting that so many are vicious, finally chooses the deer. This causes everyone to laugh, but Harold shows that he is always one step ahead of the game, and is confident in his choice. Courtney, without hesitation, chooses the jaguar since they are sleek, fast, intelligent (and as Geoff points out, spotty and shouldn't be left alone with your kitten). The final part of the challenge is to place the lei around the neck of the appropriate spirit animal. Owen groans, realizing he needs to help Blaineley more.

Harold makes it up to the top first, but Courtney steals Harold's lei. Owen arrives later, dragging Blaineley behind him without much care for her safety. At this point, Geoff reveals that Chris is forcing the contestants to sing I'm Winning This during the challenge. Courtney hits the surf first, quickly followed by Harold. Owen hangs the lei around Blaineley's neck then pushes her off the river cliff. He later ends up riding on her like a surfboard.

At the bottom of the river, Harold flies off first and is distracted by a chunk of rock from the lava going into his shorts. This causes him to drop his lei on the raft, which, unfortunately, is eaten by the deer. Next, Owen shoots Blaineley off, who flies high towards the Doberman, but overshoots and lands in the water. Courtney, hiding her eyes, manages to put the lei on the jaguar. After Bridgette's prompting, Geoff half-heartedly calls for a lifeguard to rescue Blaineley from the water. Bruno runs into the water instead, and carries her in his mouth like a chew-toy. Courtney then demands to know her prize. Apparently, no one was supposed to win, but since Courtney came out on top, Alejandro wins a wheelbarrow. Harold, coming in second, wins a baby-carriage for Cody to use if he makes it to the final two. Heather gets no advantage in the end. It seems that Bruno is more interested in chewing on Blaineley's head than protecting Bridgette from Geoff's attention.

Lindsay and Tyler, Harold and Leshawna, and Duncan and Gwen are relaxing on the beach, along with Bruno, still chewing on Blaineley. Courtney is standing next to Gwen and Duncan and continues to ramble on about them. When she starts singing her hateful song about them once again, Duncan finally gets fed up and throws a sandal at her, hitting her in the face and knocking her out. He and Gwen then smile at each other before they share a kiss.

Geoff hosts this installment of Total Drama Aftermath by himself.

All eliminated contestants that appeared in the previous Aftermath appear in the peanut gallery.

To the left is Eva, DJ, Noah, Tyler, Lindsay, Izzy, and Trent.

On the other side is Beth, Justin, Katie, Sadie, Harold and Leshawna.

Geoff shushes Courtney as she's about to sing.

Blaineley ends up in a serious condition after taking the Drop of Shame.

Blaineley's injuries are explained in a previously unseen clip of Chinese Fake-Out.

Contestants laugh at Blaineley after she is rolled in.

Bridgette and Geoff are reunited.

Bruno is displeased about that.

The peanut gallery hides from Bruno.

Geoff confiscates Harold's microphone after he interjects during Who You Gonna Root For?

Bruno is furious at this.

As a result, Bruno smacks Geoff.

After being scolded at, Bruno walks toward the peanut gallery, causing various members to scamper away.

Geoff and Bridgette talk about Cody...

Chef makes a cameo appearance on top of an ambulance during a recap.

Harold and Leshawna raise their hand when Bridgette asks who got eliminated by Alejandro...

When Cody's punch is mentioned, Duncan says that he "took a dive, so he'd feel better."

Bruno sleeps on Geoff once the tea takes effect.

Nobody is willing to help Blaineley up after she falls.

After Bridgette announces a challenge, Courtney quickly volunteers for Alejandro.

Harold offers his help for Cody in the challenge.

Duncan gives Harold permission to volunteer for the challenge.

Heather's supporters step back, leaving Blaineley responsible to compete in the challenge.

After the three volunteers have been decided, Geoff explains the challenge to the contestants.

Owen volunteers to help Blaineley in the challenge.

Geoff explains that the contestant must grab a lei.

Afterwards, the contestant must grab a surfboard.

Finally, the contestant must surf down and throw their lei into one of the three rafts with the contestant's spirit animal standing on top of it.

There are several different spirit animals to choose from.

The spirit animal must represent the contestant.

The contestants laugh when Harold compares Cody to a deer.

Owen tries to figure out which animal Blaineley is pointing at.

The spirit animals are set up on the rafts.

The doberman selected for Heather attacks an intern.

Harold taunts Courtney for picking the jaguar, when he gets the easier task of a deer.

Harold is quick to grab the first lei.

However, Courtney is not far behind and grabs the second lei.

A tired Owen is the last one to grab a lei.

Courtney about to sing her hate song.

Blaineley is sent flying, ultimately landing far away from the animals.

Owen, Harold and Courtney surfing to the animals.

A jaguar roars at Courtney after she surfs down.

Courtney cannot bare to look at the jaguar.

Courtney celebrates after winning the challenge.

The jaguar is surprised by the lei.

Geoff tries to get close to Bridgette, but Bridgette is nervous that Bruno might take it poorly.

Due to Courtney winning the challenge, Courtney wins Alejandro a wheelbarrow for later on in the competition.

For second place, Cody will receive a carriage, thanks to Harold.

Lindsay, Tyler, Harold, and Leshawna appear at the beach in the exclusive clip.

Bruno chewing on Blaineley in the exclusive clip

Duncan and Gwen relax on the beach in the exclusive clip.

Retrieved from "https://totaldrama.fandom.com/wiki/Hawaiian_Style?oldid=1573723"
Community content is available under CC-BY-SA unless otherwise noted.