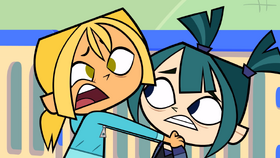 When one of the kids get the hiccups, a schemer decides to help treat them by taking advantage of them. Meanwhile, another kid goes through desperate measurements in order to receive a can of soda.

One morning at the daycare, Chef is doing the dishes in the kitchen when Bridgette comes in asking for help. Moments ago, when she attemped to slide down the treehouse head first, Bridgette accidentally swallowed a worm on the way down. Chef opens to fridge to look for something to get rid of the worm taste from her mouth and finds a can of orange soda at the back, an item that is forbidden by Chef unless they are as tall as him. Bridgette begs Chef to let her drink the soda, hoping it can get rid of the disgusting taste. Chef initially refuses but eventually relents under the condition Bridgette finish the can fast. The sound of Bridgette pulling the soda tab can be heard by the other kids outside the daycare and they all become zombies who want the soda too. Chef tries to hold back the "zombies" as long as he can until Bridgette drinks finish the soda. The kids eventually break in but Bridgette gives out a loud burp that breaks them free of their state of stupor. Owen begs Chef to give him a can of soda too but Chef refuses and will only gives him if he too ate a worm.

As Bridgette is talking with Gwen about the loss of the taste of worm in her mouth, Bridgette suddenly begins to hiccup uncontrollably. As the hiccups become unbearable, Bridgette begs Gwen to find a way to treat her. Gwen suggests Bridgette to hold her breath but Bridgette refuses. Chef then tells her to feel surprised, something that he and his brother often did to each other when they were kids whenever one of them got the hiccups. Chef uses a scary jack-in-the-box in order to surprise her but it didn't work as Bridgette admits that she saw it coming. Izzy then tells her to close her eyes and pull her to the other end of class to show her a surprise; an early Christmas celebration, complete with gifts, decoration and out of tune Christmas carols. While Bridgette is surprised by this, it fails to cure her hiccups. Disappointed, Izzy and the other kids clean out the decorations, take back Bridgette's gift and take out the tree.

Meanwhile, Owen is trying to find a worm for him to eat and notice a bird feeding its hatchlings. Owen pretend to be a bird so the mother can feed him but the bird and its hatchlings avoid him only for the persistent boy to keep following them, somehow even flying to the roof of the daycare. Back in the daycare, Bridgette's hiccups persists and this attracts Noah's attention. Noah tells her that because of her hiccups, her parents will send her to Hiccup Island, a place with no food, water or Wi-Fi where kids are sent where they will break rocks forever. Not wanting to be sent to such a place, Bridgette begs Noah to cure her. Noah agrees to help her under the condition she follows exactly what he says. The tasks Noah asks her to do however are mainly for his own amusement however such as pushing his swing, making a pile of leaves for him to jump onto and doing his art project.

Back to Owen, he continue to follow the birds back to its nest. The mother bird finally gives up and gives him the worm. Owen realizes how disgusting the worm is and is then attacked by the hatchlings. Meanwhile, Bridgette is fanning Noah as part of her treatment only for her condition to persist. As it is the end of the day, Noah gives up on the treatment and sarcastically says goodbye to Bridgette. Upon noticing that her mother has arrive, Bridgette breaks down of the stress from all her problems and the being sent to Hiccup Island. Bridgette suddenly realizes that she had stop hiccuping and thanks Noah by hugging him. In the confessional, Noah admits that there is no such thing as Hiccup Island and his plan was to scare Bridgette as fear is a good cure for hiccups. As Chef is watering the plants, he notices Owen being carried by the birds and throw him to the window. Despite the pain, Owen asks Chef for a can of soda only for Chef to tell him that the can Bridgette drank is the only one. Owen realizes that everything he did is for naught and he should have know about it earlier in the morning.

Beth shows off her plate twirling skills first performing with one plate, then one on each hand, and then balancing three plates with one hand while standing on one hand.

Bridgette tells Chef that she accidentally ate a worm.

Chef asks Bridgette how did she accidentally eat a worm.

Bridgette wants the kids to watch her going down the slide.

Bridgette sees a worm on her way and accidentally eats it.

The worm's reaction when he saw Bridgette.

Bridgette can't get the taste of the worm out of her mouth.

Chef finds a can of soda in the fridge.

Bridgette's reaction when she sees the can of soda.

Chef talks about his rules.

Chef gives Bridgette the can of soda.

The kids' reaction when they hear Bridgette opening the can of soda.

Chef blocks the door so that Bridgette can drink the soda.

Bridgette drinks all the soda..

Owen wants Chef to give him soda.

Owen has an idea as to how he can get soda.

Owen imagines himself eating a worm under the sea..

Bridgette got the taste of worms out of her mouth.

Bridgette is annoyed by her hiccups.

Bridgette wants to get rid of her hiccups.

Gwen asks Bridgette if she ever tried holding her breath.

Bridgette doesn't want to hold her breath because she thinks she might die if she does it.

Chef's got a better idea as to how Bridgette can get rid of her hiccups.

Chef talks about how him and his brother..

.. used to constantly scare one another.

A young Chef in the shower.

Chef tries to scare Bridgette with a Jack in the box but fails.

Chef gets scared by the jack in the box he tried to scare Bridgette with.

Beth, Cody, Leshawna and Harold sing a song about Christmas.

"Christmas is always the biggest surprise because you never know when it's coming!"
- Izzy

The kids find the puppy to be adorable.

Izzy's takes the puppy away from Bridgette.

The kids take the Christmas tree away.

Owen is searching for worms to eat.

Owen tries to get a worm from a bird.

"You mean you don't know about Hiccup Island?"
- Noah

Bridgette gets scared after Noah tells her about Hiccup Island.

.. and how the kids who can't stop hiccupping get sent there to break rocks forever.

Noah decides to help out Bridgette.

Bridgette pushes Noah on a swing.

Noah jumps into the pile of leaves.

.. but that doesn't stop her from hiccupping either.

Bridgette gets glitter all over her face.

"What? I'm helping her! So is it wrong if there's a little something in it for me?"
- Noah

Owen pretends to be a bird.

The bird decides to feed Owen..

.. which makes a squirrel sick.

The baby birds are angry at Owen for eating their food..

Noah plays on his phone..

.. while Bridgette is fanning him.

Noah tells Bridgette that he's going to miss her..

.. and that friendships are illegal on Hiccup Island.

Chef tells Bridgette that her mom is at the daycare.

Bridgette goes to the door to see her mom.

Bridgette sees her mom's car right in front of the daycare.

Bridgette's mom comes out of her car.

Chef doesn't want Bridgette to talk about the worm and the soda to her mom.

Bridgette gets angry and sad because she thinks her day was awful.

Bridgette starts listing all the bad things that happened to her like eating a worm..

.. a puppy getting taken away from her..

.. being covered in sparkles and macaroni..

.. and surprise Christmas getting taken away.

Noah says that he was lying to Bridgette about Hiccup Island.

Chef tells Owen that he only had one can of soda.

Retrieved from "https://totaldrama.fandom.com/wiki/Hic_Hic_Hooray?oldid=1604708"
Community content is available under CC-BY-SA unless otherwise noted.