How Deep Is Your Love

How Deep Is Your Love 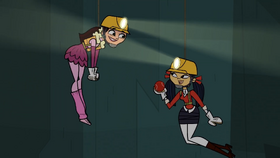 Ice Sail to the next challenge site.
Collect a ball in an underground cavern.

The five remaining teams head for Russia for some ice yachting and traveling deep beneath the Earth's surface. When someone continues to try and connect with another, a partner tries to keep them focused only on them instead; while someone decides to sabotage another team's run, leading to a penalty but still securing victory in the end. The rivalry between two contestants leads to one becoming overly reckless, ultimately leading to their partner paying the price; while the team comes in last in a non-elimination, they decide to stay in the game despite one's injury.

The teams must now take a flight to Siberia, Russia to find their next Travel Tip. The Axis of Evil start by getting their tips and feign trusting one another, but are secretly planning to let the other teams think they're loyal to their alliance. MacArthur plans on targeting the Sisters due to them being the least threat, as compared to the other teams. In the Sisters' taxi, Emma tells Kitty that they have to make sure that The Axis of Evil targets the Best Friends instead of them, while Kitty isn't sure if she wants to do that because of their alliance and her friendship with Carrie. In the Best Friends' taxi, Devin tries to confess his feelings for Carrie, but instead ends up unintentionally telling her he loves unibrows.

All of the teams get booked on the same flight to Russia, due to the pilot over the speaker talking slowly and by saying "uhhhh" as much as he did, much to Josee's anger. After landing, the teams must ride ice yachts while wearing their swimsuits to the Kola Borehole. The Police Cadets fall behind after MacArthur's tongue gets stuck to a trash can, due to Josee pushing her. To make matters worse, the Ice Dancers mess with the Cadets' yacht, resulting in it malfunctioning. Carrie and Ryan refuse to sabotage one another's teams because of their friendship, much to the annoyance of both their partners. Emma refuses to help the Best Friends, due to them not being in last place, despite their alliance. After arriving at the Kola Borehole, one of the teammates from each team must now be harnessed and cranked down a 7-mile hole by their partner. Once they're down there, they must find a red ball in order to proceed to the Chill Zone.

The Ice Dancers have a bit of trouble during the challenge due to Josee's claustrophobia, but after some motivation from Jacques, she gets a thought of sabotaging the Sisters when she sees Kitty's flashlight. Jacques then lowers Josee down to where Kitty is. Josee begins by asking Kitty if the balls are in plain sight or hard to find. Kitty then tells her that it's pretty easy with the helmet light. Once Josee hears this, she quickly punches out Kitty's light, steals her ball and tells Jacques to pull her back up. When she gets back up, Emma sees this and calls the Ice Dancers "cheaters." When Kitty starts to get lowered back down, she tells Emma that she can't see anything due to Josee smashing her helmet light. Emma then tells Kitty that she'll just have to feel around for another ball, as she believes her team still has a chance as the Cadets didn't show up to the challenge yet. Once the Ice Dancers get the ball, an outraged Emma angrily wishes them that someday they'll get what they deserve. Unfortunately for Emma, the Ice Dancers secure themselves in first place despite the thirty-minute penalty they incurred for not doing the challenge completely. When the Police Cadets finally make their way to the challenge area, they then realize they can't brake, caused by the Ice Dancers. MacArthur then tells Sanders to tie a rope to the front of the yacht and MacArthur jumps out with trash can and manages to stop it from falling down the hole, also separating her from the trash can.

Meanwhile, Kitty sees that Ryan has come down the hole and asks if he can help her since it's dark down there. A still enraged Stephanie tells Ryan not to help Kitty. Though Ryan suggests maybe he could help if he finds two balls in the same spot, Stephanie pulls him back up immediately. While the Haters make their way to the Chill Zone, Carrie helps Kitty with the challenge, since they are in an alliance from the previous episode. In the interview confessional, Stephanie demands Ryan to argue with her again, believing that they'll be eliminated from the competition, but he's been poking fun at her by agreeing with everything she says, making her angrier. As more teams complete the challenge, MacArthur lets Sanders fall down the hole to speed things up and ends up breaking her arm. After MacArthur talks about how bad she feels about what she did to her partner, the Cadets arrive at the Chill Zone in last place. However, Don reveals it's a non-elimination round, to which MacArthur tries to hug Sanders but she accidentally hurts her broken arm instead. Due to Sanders's injury, she is given the choice of whether or not to continue in the race, in which she agrees to under the condition that MacArthur listens to her now. Don then signs off the episode.

The contestants will visit Russia.

Kitty and Emma talk about The Axis of Evil.

Stephanie gets annoyed by Ryan's consistent agreeing with her.

Don flexes his muscles while introducing the challenge.

The Cadets in their swimsuits.

...until Josee pushes her over.

The Siberian Sasquatchanakwa helps the Haters.

Sanders asks for help from the Ice Dancers...

...but Carrie doesn't because that would be so mean.

Kitty tells Emma to help Carrie and Devin, but she refuses.

MacArthur's tongue got stuck to a garbage can.

Kitty after reaching the hole.

Kitty shivers due to feeling the cold, in a deleted scene from the English version.

Kitty is afraid of the challenge.

Don in the sauna.

Ryan and Carrie get annoyed by their partners' behavior.

Stephanie and Devin hug each other with fear when they see the hole.

The Ice Dancers and the Sisters doing the second part of the challenge.

Josee has the problems with the challenge because of her claustrophobia.

Carrie and Ryan have another conversation, much to their partners' annoyance.

The Ice Dancers get a thirty-minute penalty.

Kitty asks Ryan for help but he is forced by Stephanie to go.

Carrie decides to help Kitty because of their alliance.

Despite their thirty-minute penalty, the Ice Dancers still come in first.

The Best Friends come in third.

The Sisters are shocked after Sanders's fall.

Stephanie has had enough of Ryan agreeing with her.

Ryan and Stephanie make out.

"Stick a fork in that team, because they are done. Bing!"
- Josee

MacArthur regrets being so reckless and injuring her partner.

MacArthur carries Sanders to the ambulance.

MacArthur watches as Sanders is put into an ambulance.

MacArthur waits for her partner being treated.

The Cadets come in last.

MacArthur hugs Sanders after learning that it is a non-elimination round.

Sanders decides to stay in a race, despite her injury.

Sanders takes the charge of the team.