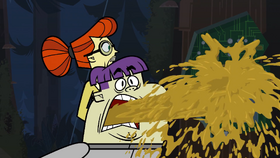 Dave
The final seven contestants are merged. Their challenge is to eat a disgusting meal in which the first finisher gets to hunt the others in a hide-and-seek showdown. One loses self-control due to another rejecting their feelings, while someone finally reclaims the respect of another by confronting their fear and no longer abandoning their loved one. One ultimately sends themselves home, depressing another, while two players' discovery leads to an even more shocking conclusion.

The episode begins with the contestants sleeping in their respective quarters as an eerie voice begins to speak and mocks them. However, the voice turns into a shout by Chris who awakens all of them. All of the contestants complain about Chris awakening them in the middle of the night, and he gleefully announces the merge. The contestants are still unhappy, because it could have waited until morning. Chris then explains that the lawyers told him only feeding one team a few days at a time is "technically starvation": thus, he has prepared a legally-enforced, celebratory meal for them for reaching the merge.

Despite the fancy dining area he prepares for them, the only food served are "Juggy Chunks", much to the disgust of everyone except Sugar, who is reminded of the commercial about the food.

The meal serves as a pre-challenge for the actual challenge. The first person who finishes their cup of Juggy Chunks the fastest, wins invincibility. Just as the challenge is about to begin, Chef informs Chris that the Juggy Chunks served to the contestants has expired decades ago, though Chris dismisses it.

The challenge begins with everyone except Sugar having problems drinking their glass. Seeing Jasmine having problems, Shawn attempts to motivate her but she angrily yells at him, still upset over what he did several episodes ago.

Meanwhile, Dave, remembering Shawn's advice from the previous episode, attempts to impress Sky by winning the challenge despite his fear of germs. However, he eventually passes out due to its disgusting contents. Soon after, Sugar starts singing the Juggy Chunk commercial theme, further grossing out everyone.

Once Sugar is done singing, she finishes gulping down her glass and wins the challenge, along with immunity. Despite the challenge having ended, Dave and Sky continue drinking their glasses, with Dave finishing his faster than Sky.

Not realizing how mad Sky is, Dave begins to taunt her for losing to him until Sky yells at him and tells him that they never were and never will be a couple.

Devastated that Sky rejected him, Dave starts to cry and Chris make things worse by reminding him of his failure.

With the pre-challenge over, Chris announces the actual challenge: Hide and Group Seek. For winning the previous challenge, Sugar will be "It" and it is her job to find the other contestants who are tasked to avoid getting captured by her until sunrise. Whoever is tagged by Sugar will join her in finding the remaining contestants. The person who manages to avoid getting caught until sunrise will win invincibility.

The contestants are given a head start while Sugar drinks the remaining Juggy Chunks that the others couldn't finish.

Shawn once again tries to help Jasmine but she rejects him, believing that he will sell her out again.

Meanwhile, Dave is still determined to win Sky's heart and tries to find where she is. From her hiding spot, Sky tells Dave to leave or else they will both be caught. An argument breaks out between the two and becomes even worse when Dave asks her if he can be her boyfriend once the two had smiled at each other. Once again, Sky rejects him and returns to her hiding spot with a terrible stomach ache.

Heartbroken, Dave finally reaches his breaking point of insanity and throws his shoe at Sky's direction before howling like a wolf, until it is broken by Dave's coughs.

Max and Scarlett begin to suffer from food poisoning like Sky.

Suddenly, Max is hit by the shoe thrown by Dave and throws it away, hitting Sugar who had begin hunting the others. From the top of a tree, Dave asks Sugar to give him back his shoe. Sugar complies and throws it at him with such force, he falls down the tree. With Dave now on ground level, Sugar tags him. Meanwhile, Chris calls the Juggy Chunk's poison hotline and is informed that whoever eats expired Juggy Chunk will suffer from various symptoms including vomiting, nausea, strange behavior, and hallucinations. Later, Max falls against a tree, causing a piece of it to break off, revealing a secret control panel.

Back with Sugar's team, Dave sees two love birds and tells the male bird not to trust the female, comparing them to his situation. Seeing this, Sugar discovers that she can motivate him to tell her where Sky is hiding. Already mad from being rejected by Sky and from the side effects of the Juggy Chunks, Dave complies and leads him to where he last saw Sky. As expected, Sky is still within the area and is easily caught by Sugar. Suddenly, Sugar too begins to suffer from the Juggy Chunk's side effects but dismisses it. Meanwhile with Scarlett, she has a hard time figuring how to hack the control panel as a result of her food poisoning. Scarlett comes to the realization that the island is being controlled by a giant mainframe and that it is not organic. Just as she is about to figure it out, Max vomits on the panel, causing it to haywire. With nothing left to do, Scarlett picks up Max and leaves the area as rain starts to fall. The duo then stumble across Sugar's team, all covered in mud and moaning as a result from their food poisoning, making them to act like zombies.

Shawn and Jasmine are the only contestants who have not been caught; with Shawn hiding on top of a tall tree while Jasmine hides in a cave. However, Sugar's team finds her and begin to slowly pursue her. From the tree, Shawn sees Jasmine being chased by the other nauseated contestants and mistakes them for "zombies".

However, this time he refuses to abandon her, not wishing to make the same mistake again. Just as Jasmine trips and twists her ankle, Shawn swings in and urges her to come along.

At first Jasmine is still hostile to Shawn, but as she notices the "zombies" approaching she panics and complies. Shawn is informed that Jasmine has been injured so he attempts to carry her, but she is too heavy, so instead Shawn pulls her up into the tree. However, the "zombies" continue to chase them by climbing up the tree, something that Shawn never anticipated. With no other choice and no other place to run, Shawn decides to sacrifice himself by bringing the "zombies" down with him. The moment they touch the ground, Chris declares that time is up and Jasmine has won the second immunity. Before he leaves, Chris tells the contestants to head to the meeting area so the medical team can clean their stomachs. From the top, Jasmine finally gives in to her food poisoning and vomits on the others.

At the campfire ceremony, everyone has finally recovered from food poisoning and Chris gives all but Sky and Dave a marshmallow, explaining that Sky is in danger for the way she talked to Dave after the pre-challenge.

After checking the votes, Chris declares that Sky is safe as a result of Dave voting for himself. Jasmine finally forgives Shawn and kisses him on the cheek for saving her. After entering the Cannon of Shame, Dave is saddened when Sky does not even come to say goodbye and is blasted away from the island. Without his knowledge, Sky indeed does come to see him but is too late. As Chris attempts to sign off the episode, the entire island suddenly goes haywire, with snow blowing, the landscapes and trees moving, and the sound-effects going off-key. Chris tries to keep his cool, but he ultimately screams over the commotion as the camera fades to black.

Sugar before the pre-challenge.

...and also a feast to celebrate it.

The contestants are disgusted about the Juggy Chunks...

Sugar is happy about the challenge.

Sugar telling Chris about her wanting to host a spin-off.

Sugar wins the pre-challenge and immunity.

Dave tries to show Sky that he can beat her.

Everyone after Chris comments of Sky rejected Dave.

Chris explains the second part of the challenge.

The contestants start running away.

Dave throws one of his shoes away.

...right before she tags Sky.

Dave and Sky feel the effects of their Juggy Chunks, while Sugar is in the early stages.

Max begins to experience the effects of food poisoning.

Sugar busts Max and Scarlett too.

The "zombies" go after Jasmine.

Shawn swings in to save Jasmine.

Shawn tries to save her...

A romantic moment between Shawn and Jasmine...

...moments before the "zombies" start climbing the tree.

Shawn prepares to jump down onto the "zombies."

The massive pile of the contestants means that Jasmine just won the challenge.

Jasmine hurls on the contestants, once it's announced she just won.

Jasmine forgives Shawn and kisses him for the first time.

Dave campaigns to have himself voted off.

Dave in the Cannon of Shame, moments before he is blasted away.

Retrieved from "https://totaldrama.fandom.com/wiki/Hurl_and_Go_Seek?oldid=1688746"
Community content is available under CC-BY-SA unless otherwise noted.