I Love You, Grease Pig! 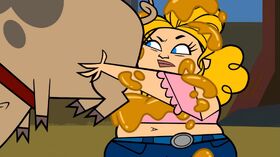 Go through a greasy obstacle course with a grease pig

A bucket of Jimmy's Beaks and Feet

Leonard
The host sets up a greasy obstacle course relay race with a greasy baton. Two players quickly emerge to take over their teams, one becomes tired of being trampled by a relation, and a few contestants begin to get on the host's nerves. Eventually, one wins it for her side, while a wizard runs out of magic and is made to disappear.

The episode starts with Jasmine on a branch above her team's shelter. She jumps on the roof and wakes up Amy, who demands to know where she's going. Jasmine says she's going to forage for food, so Amy pushes a still asleep Samey outside and tells her to go get her some food and to not be "lazy" like she was at birth. Meanwhile, the Waneyihtam Maskwak is sitting near the beach. Leonard is telling a story about his travels as a wizard. Sugar, admiring herself in a mirror held by Ella, seems to be the only one impressed. Dave is unconvinced, but Leonard claims everything really happened. Sky reminds them that they need to find a shelter, as they had to sleep outside on the rocks the night before. Leonard brushes it off, saying that he levitated above the rocks.

Meanwhile, Jasmine talks to Samey while foraging, telling her that she should stop letting Amy push her around. Samey then finds what appears to be an apple and begins to eat it. Though it is shot out of her hand by Jasmine, who pierces it to a tree with a stick. Not knowing what the apple actually is, Samey then tells Jasmine that she would've shared if she had asked. Jasmine begins to explain, but Shawn interrupts her from the treetop. He finishes that the "apple" is actually a poisonous Manchineel fruit, in which causes Samey's hand to blister. Shawn advises Samey on how to treat her hand. Jasmine also dismisses her from foraging in her condition. She then notices the generous amount of berries filling Shawn's bag, and comments he is "quite the outdoorsman." Shawn responds that zombie apocalypse skills are a must. She also asks him why he is up in the tree, to which he explains he was sleeping there to stay clear of zombies. In the confessional, Jasmine expresses that she thinks Shawn is cute and "kind of hilarious." She finds his fear of zombies funny, unaware he truly believes in them.

Shawn brings the food to his team, who all show great appreciation for his efforts. Maskwak and Kinosewak then arrive at the challenge area where Chris explains the day's task: an obstacle course soaked in grease, featuring a log slide, a zip-line, pipes, tires, a grease pit, and a wall. To top it off, instead of using a baton, both teams are assigned a grease pig for them to transport across the course. Jasmine and Shawn both take charge of their respective teams. Pimâpotew Kinosewak get themselves arranged without much trouble, but Waneyihtam Maskwak get into a slight disagreement thanks to Dave and Sugar arguing. Dave wishes for Sky to take the last leg due to her athletic background, but Sugar wants Leonard to do it instead, firmly believing him to be a wizard. Dave agrees after Sugar intimidates him.

The challenge begins, and Sky immediately has trouble with her pig as it runs off in the wrong direction. Meanwhile, further up on the course, Max creates a helmet device he claims can turn any animal into an "evil minion." Scarlett humors him by exclaiming she has goosebumps. Back at the first leg, Sky finally manages to place her pig at the foot of the slide. With some encouragement from Shawn, she is able to push her pig fully across while also using it as leverage to flip to the end of the leg. Shawn takes the pig's leash and it runs off with him as Rodney also finishes the slide and passes to Topher. Shawn reaches the zip-line but falls off the cliff after the pig bites down on his head. The pig slides down the zip-line on its own, and Topher properly uses the zip-line while complimenting Chris on the challenge. As he does this, however, he also comments that Chris looks like he has been up all night, worrying him. Sugar excitedly catches the pig as it flies off the zip-line. She lovingly cuddles it to make it calm down, thus making her experience easier. Topher completes his leg and starts talking to the camera, attempting to bring the show to a commercial break. Much to the annoyance of Chris, he appears beside him, to which Topher apologizes for trying to do his job. Chris then cuts to a commercial, as Topher shadows his every move.

After the break, Sugar cradles the pig and pacifies it before going through the greased tube. Amy arrives there with Samey and demands the latter go through the tube herself, angering Samey immensely. The pig is startled by Amy's yelling and it runs into the tube, taking the sisters with it. Sugar eventually comes out of the tube and Ella is ready to "take it from here." Sugar refuses to give up her new friend, so Ella sings to it, causing it to jump out of Sugar's arms and into Ella's. This upsets her, and she rants her dislike of her in the confessional. As Ella continues on to the next course, Scarlett leaves a trail of pecans near the end of the tube to lure the pig out. The plan works and the pig runs out with Amy and Samey. Amy is furious with Samey for the pig dragging them through the tube, and when Samey tries to tell her it is her own fault, Amy aggressively makes Samey submit to taking the blame.

Meanwhile, Ella continues to sing to the pig as she goes through her course. This annoys Chris, who blows a horn over the intercom to stop them. The pig runs around, frightened, and Ella angrily calls him out on his actions. Scarlett arrives to Max and hands the pig off to him. While he stretches before running the course, Scarlett takes a look at Max's helmet and connects a loose wire, turning the device on. She puts it on the pig just before Max runs off. Ella approaches Dave sadly explaining to him what happened. She holds up the leash and offers her best wishes. Dave is hesitant to take it, due to the germs and grease on it, but does so anyway. Max is elated when he sees his helmet his working, with the pig hurling grease at Dave. He scolds it when it begins covering him in grease as well. Max trips, while Dave begins to panic but does complete the course. He goes off into a panicked hysteria as Sky arrives to calm him down. Dave eventually settles and develops a crush on her, which Sky takes notice to. Max finishes the course as the pig continues to throw grease at the other contestants, but he runs into a rock, making the pig fly out of the wheelbarrow and destroy the helmet, much to his dismay. The pig comes to its senses and begins to panic, but Jasmine manages to soothe it and takes it to the last leg of the course.

During the final leg, Leonard attempts to cast a levitation spell on the pig. When it doesn't work, Dave yells at him to simply pick it up and climb the wall. Leonard protests that his spells aren't working because someone doesn't believe in him. As Dave shrieks that it is he who does not believe, Jasmine completes the course, winning the challenge for her team. The winning meal is a bucket of "Jimmy's Beaks and Feet." As the Pimâpotew Kinosewak walk back to their tree house, Rodney attempts to "break up" with Jasmine after falling for Amy earlier in the episode. At the elimination ceremony, most of the team, aside from Sugar, blames Leonard for their loss. Despite an effort to save himself with a spell, Leonard is eliminated. Chris and Chef mock Leonard as they fire him from the Cannon of Shame, while Sugar declares her love for the wizard as he flies off into the distance.

...so she forces Samey to go with her.

Amy talks about how Samey has been "lazy" ever since she was born.

Jasmine encourages Samey to stand up to her sister.

The poisonous apple is flung out of Samey's hand by a stick that Jasmine has thrown...

Shawn tells Samey that the apple was a "manchineel fruit."

Samey's hand begins to blister thanks to the fruit.

Jasmine gives up explaining her "cricket" metaphor to Samey.

Jasmine is puzzled by Shawn's mention of zombies...

...but she still takes a liking to him.

Jasmine talking about Shawn in the confessional.

Topher thanks Amy for bringing the berries.

...after she punches him in the stomach.

Shawn takes charge of the team.

Amy and Samey versus Sugar.

Topher makes fun of his teammate.

Shawn falls off the cliff.

Topher is impressed by how cruel Chris' challenge is, while adding Chris looks tired.

Samey and Amy with their team's pig.

Topher begins to steal Chris's place and sign off the show...

...though Chris is not happy with him doing so.

Amy continues to be demeaning toward Samey.

Samey claims that she was close to standing up to her sister.

Amy complains about being sweaty and disgusting.

Amy snaps at Samey for trying to avoid blame.

Sugar finishes her part of the challenge.

Ella sings to attract the pig.

Ella hugs and dances with the pig...

...but takes too long to complete the challenge...

...so Chris scares the pig away, just before Ella scolds him for doing so.

Scarlett in the challenge.

"That's what you get when you're up against evil incarnate!"
- Max

Max is betrayed by the grease pig.

Dave finishes his part of the challenge.

Dave freaks out when he gets covered in grease...

The evil pig throws grease at the cast.

... much to his disappointment.

Jasmine calms the pig down.

...and happily runs away with their reward.

Team Maskwak watch the other team leave with a reward.

Jasmine and Samey with the team's reward.

Rodney "breaks up" with Jasmine.

Shawn still refuses to sleep with the rest of his team.

Ella and Leonard are in the bottom two.

Sugar's reaction to Leonard being voted off.

Leonard takes the Cannon of Shame.

Retrieved from "https://totaldrama.fandom.com/wiki/I_Love_You,_Grease_Pig!?oldid=1628027"
Community content is available under CC-BY-SA unless otherwise noted.