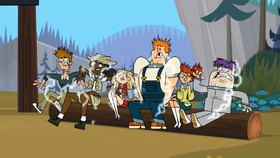 A bag of cooked horse from Humpty Dumpty's Meat Shack

Rodney
The host makes the teams go through a truth-or-dare showdown. Someone has to face up to her guilt regarding her problems with another contestant, the attraction between two contestants grows stronger, and two competitors continuously get tormented over and over. Ultimately, someone's issues with being truthful with his infatuations end up making him tongue-tied and eliminated.

The episode begins with Jasmine getting up to carry out her usual morning routine of foraging for food, however Samey asks her if she is foraging without her. Jasmine reminds her that it is the recently eliminated "Samey", who usually forages with her and not "Amy". Remembering not to blow her cover, Samey pretends to be her sister, and acts rudely towards Jasmine. While Samey is glad that Jasmine is helping to hide the truth from everyone, she puts a blueberry underneath her right eye to serve as Amy's beauty mark, in order to ensure everyone that she is her sister. As the pair are in the woods, they meet up with Shawn as usual but just as Jasmine comes up to talk to him, Shawn immediately retreats, pulling Dave with him. While the girls wonder what is wrong, Shawn admits that he is terrified about developing feelings for Jasmine, afraid that she (and their future baby hiding in his pillow) would turn into zombies and eat his brains.

Meanwhile, Rodney and Scarlett are on the way to their team's eating spot when Scarlett stops him from stepping on some feces. Just as with Jasmine and Amy, Rodney falls in love with Scarlett. Things become even more complicated when Samey touches his arm during breakfast and becomes infatuated with her as well (or more specifically, her sister again). Rodney realizes that now he has three "girlfriends" (Amy, Jasmine, and Scarlett) and is conflicted on how to choose between them. As the teams are eating breakfast, they discuss and compare how useful "Amy" is to her good for nothing sister. Though angered at them for mocking her, Samey has no choice but to go along with their ridicule of herself just as Chris gathers everyone for the challenge. Ella invites Sugar to sit next to her, but the latter pushes her off due to wanting more camera time. Chris sees this and sarcastically sympathizes with Ella. As usual, Topher compliments Chris, but the host simply ignores him.

The challenge is an intensified version of Truth or Dare, called "Truth or Scare". Above Chris is a screen that will randomly select a contestant along with a halo (truth) or a flame (scare). If a contestant fails any of the aforementioned challenges, their entire team is shocked through the electric collars that Chef placed around their necks. As the slot stops at Amy's image during the demonstration, Samey is the first person to participate a Truth challenge. To detect whether a contestant is lying or not, Chris introduces Clucky, a lie detecting chicken. For Samey's question, Chris asks her who she hates the most. After being guilt tripped by Clucky, she nervously admits to hating Amy the most, much to the confusion of everyone who believes that she is Amy. When it seems that she is going to admit the truth, Jasmine stands up and reassures "Amy" that Samey's failures weren't her fault. The other contestants agree with this and again badmouth Samey, annoying her.

Rodney is the next one chosen by the screen and has to answer who he thinks is the most attractive girl on the island. He struggles between choosing "Amy", Jasmine and Scarlett but when Sugar suggests it is her, Rodney goes along with it. Clucky sees through his lie and shocks his entire team. Sugar becomes agitated and calls Clucky "broken", resulting in Clucky shocking the Waneyihtam Maskwak as well. Sky is next and she is required to drink an entire jug of mineral water in under thirty seconds. As she struggles to complete her challenge, Shawn takes control by shaking the jug and spraying the liquid into Sky's mouth. Sky scores a point for her team but the sudden rush of water entering her body causes her stomach to become upset. It is Max's turn and he is asked what frightens him the most. The self-proclaimed evil genius insists that he fears nothing, resulting in his team being shocked.

Dave goes after him and believes that he has nothing to hide, only to find out that he gets a Scare challenge instead. Challenging Dave's germ sensitivity, Chris makes him kiss the person next to him: Shawn or Sky. Since the former bolts without a single word, Dave is elated as this means he gets to kiss Sky, who is also satisfied about the challenge. As they lean closer for a kiss, Sky accidentally belches in his face. In the confessional, Sky states that this is a habit of her which occurs whenever she's nervous but persists that it is the water she drank that caused it. Because this, Dave fails the challenge and Team Maskwak is electrocuted. Shawn is then dared to pick his nose and wipe it on a competitor next to him. Since there is no one else next to him, Shawn targets Dave, who takes hint by automatically getting up and running away. Shawn easily overtakes him and fires a "snot rocket" at him, covering Dave and the rest of his team in mucus. However, Chris declares that Shawn fails the challenge as he had to "wipe" it on Dave, not everyone.

It is Ella's turn next and she is required to tell the truth. Chris asks what she would change about herself if she could and she replies she would change whatever is preventing her and Sugar from being friends. However, Sugar notices when she begins using "pageant speak" and lunges at her only for Shawn and Dave to hold her back. Even though Clucky judges Ella's answer as truth, Chris declares that Ella is lying because he believes otherwise. The challenges continue with Sky and Sugar scoring two more points for their team, while Scarlett and Jasmine score for theirs. However, every time it is Rodney's turn, he unfortunately gets a Truth challenge that involves his "girlfriends" and fails.

After many challenges, the score is still tie at 3-3. Wanting to end the challenge fast, Chris announces a "sudden death" round, during which each team will be represented by one person: Rodney for Team Kinosewak and Ella for Team Maskwak. Since this round is Scare challenge only, Rodney believes his luck has finally changed and taunts Clucky on how she could not shock him anymore and further infuriates the chicken by stating that he collects chicken eggs daily back at his farm. Clucky attempts to attack Rodney, only for Chris to calm her down. For the final round, both contestants are required to untie a bag containing a a remote programmed to the other team's collars. The winner is the first contestant who retrieves the control and activates it to shock the other team. Rodney struggles as his fingers are too large to untie the knot while Ella easily open hers. Because of her niceness, Ella refuse to shock Team Kinosewak. Clucky decides to take over and repeatedly shocks Team Kinosewak for Rodney's words. As Chef carts a restrained Clucky away, Chris declares Team Maskwak the winner and rewards them with a bag of cooked horse, much to the team's disgust. When Team Kinosewak refuses, Chris tells them that Chef is cooking chicken for dinner.

After the challenge, Dave and Sky meet up, but she becomes nervous again and runs away. Her belching can be heard in the distance as he begs for a "sign" of how she feels. At the elimination ceremony, Rodney and Scarlett are in the bottom two. Chris struggles to explain why the latter could be there and eventually gives up and gives her the final marshmallow, eliminating Rodney. As he is about to launch out of the Cannon of Shame, Rodney attempts to confess his love for "Amy", Jasmine, and Scarlett, and has trouble as usual. Chris tells him to hold that thought and fires him anyway. As Rodney's trajectory changes angle, he hits an approaching ship just as Chris signs off the episode.

"Hey, you going foraging without me?"
- Samey

Samey talking about her friendship with Jasmine.

Dave thinks the island is weird.

Rodney doesn't know how to tell his three "girlfriends" about each other.

Ella is scolded by Chris, thinking she's trying to pick a fight with Sugar.

The contestants are gathered around Chris.

Chris begins to explain the challenge.

"Amy" is chosen to answer a truth.

Samey in the confessional.

Samey scores a point for her team.

Sky takes too long to drink the mineral water.

Shawn helps Sky out with her dare.

Sky suffers the consequences of drinking so much mineral water.

Max doesn't want Clucky to sit on his lap.

Chris asks Max what is he scared of.

Max is ashamed by the possibility of being voted off.

Shawn is frightened that Dave will kiss him.

Dave and Sky almost kiss from a scare...

Shawn's scare is to pick his noise and wipe it on Dave...

The rest of the team is covered in Shawn's mucus.

Sugar's "scare" is to pet a tarantula...

...which she mistakes for eating it.

Rodney is selected for the tie-breaker.

Rodney is happy to hear there are no truth challenges in the tie-breaker.

"Bring on the scares!"
- Rodney

Ella finishes her scare and offers help to Rodney with his.

Rodney has some trouble doing his scare.

...and proceeds to press the button repeatedly...

...and wheeled away by Chef Hatchet.

Rodney wonders which of his teammates is going to be voted off.

Scarlett is in the bottom two.

Retrieved from "https://totaldrama.fandom.com/wiki/I_Love_You,_I_Love_You_Knots?oldid=1628025"
Community content is available under CC-BY-SA unless otherwise noted.