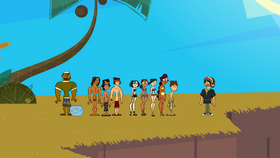 The Treasure Hunt of Death
The Bobsled of Death

Izzy and DJ
After the plane runs out of gas, the final eleven are stranded in Jamaica. One person is starting to have second thoughts about their romantic relationship with someone else and tries to break up with them. After an incident, both end up severely injured, with one of the two actually removed from the competition due to the severity of their injury, but not before the two officially break up. Meanwhile, one person's actions from the previous episode are intentionally revealed and because of this, a long-standing survivor with a curse from a losing team is finally eliminated.

The episode opens with Team Chris Is Really Really Really Really Hot and DJ, Team Victory's only remaining contestant, relaxing in the first class section. DJ talks about his new good luck charm, Irene, the cod he had to kiss in Newf Kids on the Rock that had an Egyptian symbol on its side (which unknown to him was painted on by Alejandro). DJ believes that this cod has lifted the Curse of the Mummified Dog, renewing his spirit and drive in the competition. Izzy quickly reclines in her chair, accidentally kicking Owen in the groin, causing him to curl up and cringe in pain. The scene switches to Team Amazon complaining about being in the economy class section of the plane, then switches back to first class, where Owen is telling Noah about his plan to break up with Izzy, which Noah responds by saying that it is about time. When Chris walks through the first-class section of the plane, Alejandro asks if DJ, being the last member of Team Victory, could join Team Chris Is Really Really Really Really Hot, but Chris doesn't allow it. DJ assures Alejandro that he'll be okay, unaware of Alejandro's true intentions.

While flying over Jamaica, Chris and Chef discover that the plane has run out of fuel and it begins to descend rapidly. During the chaos, Izzy grabs a parachute and jumps out of the plane, but leaves the door open, which causes Owen to be sucked out behind her. Owen lands roughly on the ground and appears to be okay, until he is subjected to more pain when Izzy lands on his groin. As Izzy proclaims that she landed without harm, she and Owen are crushed by the jumbo jet as it soon lands right on top of them both. Owen and Izzy are taken away in an ambulance, while the contestants question why most of the money was already spent as Chris and Chef bicker over the funds. At the medical tent, Owen lays beside Izzy's bed fearing that she's dead, only for Izzy to wake up and reveal that she's come up with a "mathematical formula for infinite time travel." The remaining contestants are then seen in their bathing suits on the edge of a cliff with Chris, as he explains the challenge, the teammates must tag each other, then one at a time dive into the lake and search for Chef's gold karaoke chains, while watching out for electric eels and sharks.

Tyler, Cody, and DJ are the first contestants to jump. DJ cannot get underwater, due to wearing a life jacket on his shoulders and being too afraid to take it off. Cody is grabbed by a shark and is repeatedly punched in the face. Tyler explains in the confessional that he can't see very well underwater, and in the challenge, he mistakes an eel for the gold chains. Cody runs back to the top of the cliff and tags Heather. Before she dives, Alejandro compliments Heather, distracting her, causing her to fall, and belly-flop. Tyler runs to the top of the cliff, but jumps off again, not tagging Alejandro or Noah, insisting he can do all the dives himself. Heather goes back to the top of the cliff and tags Sierra who does a cannonball, causing water to splash her teammates and land an electric eel on Courtney's head. Gwen tries to pull it off of her but is also shocked by it. DJ goes to the top of the cliff but accidentally kicks Irene off the cliff. He jumps off the cliff and catches his fish. Gwen jumps next for Team Amazon and finds the gold chains, but is shocked by several electric eels as she surfaces. Alejandro steals the chains from Gwen as he carries her to shore, but Heather steals the chains from Alejandro and brings them to Chris, winning part one of the challenge for Team Amazon.

Gwen is brought to the medical tent, where she and Owen have a chat. Izzy is writing a long mathematical equation on the wall. Owen reveals that, according to the doctor, the plane landing on Izzy destroyed a blockage in her brain. After a short while, members of the army come to take Izzy away. Owen wonders out loud why he wanted to break up with her, but Izzy claims that they are incompatible, then adds that "the relationship must end" before she is taken away by the army. Back at the beach, Chris reveals that Team Amazon's advantage for the second challenge is helmets. For the challenge, two members of each team (except Team Victory, for DJ's the only one left) must ride a longboard down a ramshackle bobsled course built by Chef into an empty pool, for three rounds. Whichever team has the shortest aggregate time wins. Chris takes advantage of Owen being sad by making him and Gwen sing, and the two sing Oh My Izzy.

Cody, Sierra, Tyler, Alejandro, and DJ are the first to take the longboard challenge. Alejandro tells DJ that with Irene he'll be unstoppable, but Tyler scolds him for being nice to another team. Owen runs to the pool, revealing that he's okay to compete, much to Alejandro's displeasure. Cody and Sierra go first and complete the course in 47.36 seconds. Alejandro and Tyler go next and get 58.49 seconds. DJ is the last one to go for the first round and gets the best time, 45.01 seconds. Courtney and Heather, Noah and Owen, and DJ are the teams for round two. Courtney and Heather get a time of 56.28 seconds. Noah and Owen experience some difficulty due to Owen's obesity, and end up getting 55.16 seconds. DJ beats his own record, completing the track in 44.37 seconds. While the original teams wait in line for round three, Alejandro tells Tyler that he painted the symbol on Irene, intentionally ensuring DJ would overhear this. Upon hearing this, DJ's self-esteem is crushed, knowing that he's still cursed.

Sierra and Cody complete the course with a time of 53.41 seconds and a total time of two minutes, thirty-seven seconds. Alejandro and Tyler get 41.09 seconds (thus, beating DJ's record) and a total time of two minutes, thirty-five seconds. While going down the course, Alejandro punches one of the boards, breaking it in order to sabotage DJ's next run. DJ leaves Irene behind on his last run. While riding the longboard down the track, DJ's animal hurting curse takes effect again as he nearly runs over seagulls and a random walrus on the track. DJ goes over the board of wood that Alejandro had broken like a ramp and is launched into the air. Chris declares the run incomplete, meaning Team Chris Is Really Really Really Really Hot wins and DJ loses by default. During the Barf Bag Ceremony, DJ asks Chris if they really need an elimination due to Izzy being disqualified earlier. DJ ends up taking the Drop of Shame, a short drop because the plane is still on the beach. Upon landing, DJ is attacked by a colony of red ants, causing DJ to scream in terror. This is enough to satisfy Chris and he signs off the show.

In an exclusive clip, Gwen is talking to the doctor in the infirmary, explaining the feel of an electric shock. The doctor eventually leaves, and Gwen tries to take a nap. However, just as she starts to relax, two of the electric eels suddenly appear slithering up the rear bedposts, and emitting electricity in several brief shocks, causing Gwen to scream in horror.

Owen licks cucumbers off his eyes in first class...

Izzy chewing an oxygen mask while hanging upside down.

DJ and his new pet Irene in the confessional.

Alejandro asks Chris whether DJ is allowed to be transferred to his team...

DJ tells Alejandro is fine being the last remaining member of Team Victory, since he has his good luck charm.

The Total Drama Jumbo Jet plummets down to Jamaica.

Izzy and Owen prepare to jump off the plane.

Izzy celebrates a successful landing by landing on Owen's kiwis.

Chris evacuates the plane after it crashes to the ground.

Courtney attempts to pull Owen and Izzy out of the plane.

An ambulance takes Owen and Izzy away.

Team Amazon at the cliff.

Chris wears a woman's dashiki for the Jamaican challenges.

The objective of the first challenge is to retrieve the golden chains, located inside a clam.

DJ wearing a life jacket for the challenge.

Tyler, Cody, and DJ get ready to dive.

Cody being attacked by a shark.

Tyler is electrocuted by an eel.

...before Alejandro distracts her...

...thus landing painfully on the water in a belly flop.

Tyler declines Alejandro and Noah's offers to do the challenge.

Gwen and Courtney getting shocked by an electric eel.

Gwen swimming before she is chased by a shark.

... but was attacked by eels moments later.

... jumping off the cliff to save Gwen.

Heather gets her revenge on Alejandro, claiming nothing personal.

Chris declares Team Amazon the winners of the first challenge.

... causing him to push him down the cliff.

Chef grins after throwing the musical accompaniment at Chris.

Gwen is brought to the medical tent for being shocked by electric eels.

The government arrives to take Izzy away.

Izzy admits to Owen that they're not a compatible match.

Gwen reminds Owen of all the problems Izzy caused him.

Courtney, Heather, and Noah all glare at Chris.

Owen is allowed to participate in the challenge.

Noah asking Owen where Izzy is.

Sierra and Cody crash into the side of the pool.

Tyler and Alejandro get ready to go down for the first time.

DJ getting ready to go.

Dj ends easily the first part of the challenge.

Heather asks Courtney if the producers can actually kill them.

Alejandro, Cody and Sierra's reaction when Courtney and Heather crash into the pool.

Noah, Owen, and DJ get ready to do the longboard challenge.

Noah hanging from Owen's foot after the latter gets trapped in a tube.

Noah orders Owen to suck his stomach in so that they can continue the challenge.

Owen and Noah complete their part of the challenge.

Heather and Alejandro discuss the challenge.

Alejandro tells Tyler that he was the one that drew the sign on Irene.

Alejandro informs DJ that he is still cursed.

Tyler pulls his headband down during the challenge so Alejandro can sabotage DJ's chances.

Alejandro and Tyler's turn to longboard.

Alejandro rigs the track so DJ will lose.

Alejandro is satisfied with his sabotage.

DJ's curse has returned, as he runs through seagulls.

Heather tells DJ that he should've just formed an alliance with her team.

Ezekiel's head can be seen on top of the hut during DJ's ceremony.

DJ takes the Drop of Shame.

The plummet down the Drop of Shame is brief for DJ.

The plane on the beach as Chris signs off.

Retrieved from "https://totaldrama.fandom.com/wiki/Jamaica_Me_Sweat?oldid=1635384"
Community content is available under CC-BY-SA unless otherwise noted.