View source
watch 02:24
Wiki Targeted (Entertainment)
Do you like this video?
Play Sound

A Tisket, a Casket, I'm Gonna Blow a Gasket

Ashley Botting
Jennifer "Jen" was a Total Drama Presents: The Ridonculous Race contestant as a member of The Fashion Bloggers with Tom.

Jen is a world-renowned fashion blogger, along with her best friend Tom, who updates her blog on a daily basis about what's hot and what's not. She is a sweet fashionista who is sure that her fabulous taste, trending skills, undying spirit and her huge will to win will guarantee her victory. According to her, when she sets her mind on something, it happens. Jen is also constantly working on her tan and often falls victim to the allure of spontaneous shopping sprees. She and her partner Tom plan to go far in the competition, while teaching the other contestants a little something about competing with style.

Jen is first introduced in None Down, Eighteen to Go - Part 1 with her partner and fellow fashion blogger, Tom, where she gives a shout out to the fans of their blog. They gain an early lead after being the only ones to take the first elevator, despite that all the buttons were accidentally pushed and are the first team to arrive for the 'scare' challenge. However, she and Tom are frightened by the sky-walk and hesitate to do the challenge, long enough for other teams who are also doing the 'scare' challenge to catch up to them. They eventually do the challenge and make it to the second plane. During the challenge in the following episode, Jen was shown warning Tom to stop drinking the stew too fast to avoid getting any stain on his shirt, which Tom agreed. They finish in tenth place.

In French is an Eiffel Language, both Jen and Tom are ecstatic when the next location is revealed to be Paris, the "fashion capital of the universe". After unintentionally causing one team to get into an accident, the two arrive in Paris where their taxi gets a flat tire in the middle of a shopping district. Jen sees this as a sign that they are destined to go shopping, and despite Tom showing reluctance at abandoning the vehicle, the two eagerly run into the nearest store. After a while, the two finally arrive at the location of the challenge, where Jen has to draw a caricature of Tom. The two make it through the catacombs safely, though they are scared off by the shadow of a rat, and eventually make it to the Seine River. Realizing that their raft will not fit both of them and their shopping bags, Jen makes a "big sacrifice" to get her hair wet and jumps into the river to push their raft. They finish in seventh place.

Jen displays her magnetic charisma and charm throughout the following episodes as she and Tom breeze through the race with poise and style. This is especially evident in Bjorken Telephone, where Jen is able to receive the travel tip by simply complimenting the local on her dress without the need to say the Icelandic phrase.

Her friendship with Tom is put to the test in A Tisket, a Casket, I'm Gonna Blow a Gasket, when they get into an argument after Carrie inquires about the origin of their fashion-focused blog. Throughout the episode, the two bicker over who came up with the idea which leads to them going out of their way to hurt one another. While taking part in the Botch or Watch, Tom crashes into a lamp, electrocuting himself. In response, Jen gives a look of concern and comes to his aid, doing a perfect flip, apologizing to him for their fight. The two make up and Tom finishes the challenge just in time to race against Stephanie and Ryan to the Chill Zone. However, they do not make it in time, and the Bloggers are cut from the race. As the pair departs, Jen explains that she was happy to do the race with Tom and that their near-death experiences were worth it in the end before being surrounded by bats.

In A Million Ways to Lose a Million Dollars, Jen appears with the other eliminated teams, applauding as the finalists race to the final Chill Zone. She is last seen in the final group shot.

Jen reading a magazine in None Down, Eighteen to Go - Part 2. 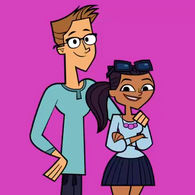 Jen is introduced, along with Tom.

Tom and Jen complain about the helmets they have to wear during the challenge.

Jen and Tom are terrified of the "Scare" challenge.

Jen holding on to Tom.

Jen is annoyed by Tom's snoring.

Jen tells Tom to be careful and slow down his drinking, so he doesn't spill any stew on his shirt.

Jen and Tom are excited to go to Paris.

The Bloggers struggle with the carpet they had bought in Morocco.

Jen tells Tom to ditch the carpet, as it's slowing them down.

The Fashion Bloggers learn about Dwayne and Junior's accident, which was caused by them.

Jen and Tom talking about shopping in Paris.

Jen noticing the shadow of a rat.

Jen thinks about it...

...but "sacrifices" her hair for the sake of her shopping.

Jen and Tom in the interview room, talking about her sacrifice.

The Geniuses laugh at the Bloggers' newly tanned skin.

Jen and Tom arrive in second, but get penalized.

Jen and Tom place fifth, as their penalty ends.

Jen is worried about her "cold wash only" top.

Jen and Tom, have some trouble, in which they slip on the ice.

Jen and Tom get second place.

Jen and Tom finish their costume.

Jen and Tom squeal in delight as the local approves of their costume.

Jen and Tom begin to argue about who started their blog.

Tom says he won't let Jen down in the challenge.

...but they feel happier after learning that Don likes their fez hats.