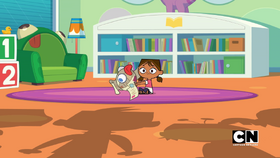 A perfectionist is challenged by their friends not to correct them whenever they do not follow the rules. This proves to be a rather hard task as their friends drive them crazy. Meanwhile, the teacher's world is turned upside down upon finding out about an information regarding a certain vegetable.

The episode opens with Courtney arriving at the daycare and greeting Chef before getting ready for the day. However when she tries to get her indoor shoes, she finds a bunch of rats in the cubby, apparently they are in there because of the other kids leaving food in their cubbies. The rats have also chewed up Courtney's favorite indoor shoes. Later Courtney is seen reading a book, but the last page was ripped out by Harold and Jude, who are making paper fish. In the confessional, Courtney talks about how she feels like she's the only one following the rules, however she is is interupted by Izzy when the latter blows a bubble with bubble gum, ruining Courtney's hair.

It's Arts & Crafts and the kids are assigned to do different assignments. Courtney and Bridgette put butterfly stickers on a drawing board while Noah, Beth and Harold randomly scribble on theirs with crayons. Duncan and Leshawna, on the other hand, are doodling on a shirtless Owen's body while Jude watches them.

Courtney explains what her favorite thing is about coming to the daycare.

Courtney opens up her cubby..

.. and notices that it's full with rats..

Courtney notices that the other cubbies are full with food.

"Compost? I thought that was a snack bucket!"
- Owen

Courtney notices that the last chapter of her book is gone.

Harold and Jude used the last chapter of Courtney's book..

.. to make a goldfish out of paper mache.

Courtney gets covered in gum..

A paper airplane lands on Courtney.

Courtney gets covered in tomato sauce.

Chef's reaction when Courtney tells him that tomatoes are actually fruits.

Alexa tells Chef that everybody knows that tomatoes are fruits.

Courtney gets angry by the kids constantly breaking the rules that messes up her world.

Courtney explains to Jude why rules are important.

Courtney scares Jude away from her.

"Where is Chef? This should be his job!"
- Courtney

Chef takes a test in his office.

Chef thinks cucumbers are vegetables but then he finds out that they're actually fruits.

Duncan thinks Courtney is unable to go a single day without correcting someone..

.. but Courtney thinks that she can.

Duncan and Courtney make a bet.

Owen tells the kids that he loves glue.

Jude doesn't want Courtney to stop him from saying dude.

If Courtney loses, she will have to clean up the kids' cubbies.

A monster hiding in one of the cubbies.

Courtney's reaction when she sees the kids' cubbies.

Courtney tells the kids that they will go down.

.. how to break Courtney down.

Duncan and Jude try to make the pizza as gross as possible.

Courtney gets grossed out and runs out of the kitchen.

Courtney thinks the kids will have to do more in order to make her lose the bet.

Noah starts paiting a sizzle right next to Courtney.

Noah paints outside the lines..

Duncan helps out Noah by giving him a bigger brush.

"This isn't bothering you, is it Courtney?"
- Duncan

Courtney goes into the bathroom.

Courtney asks Beth if she doesn't want to do something else with soap and water before she leaves.

"Is there something specific you want me to do?"
- Beth

Courtney struggles not to tell Beth to wash her hands.

Courtney tells herself to get a grip.

Beth tells Duncan that she pooped and didn't wash her hands.

Duncan wipes his hand on Jude.

A scientist tells Chef that cucumbers are fruits.

Chef feels like his entire world view is messed up.

Duncan thinks Courtney will sure stop them from lighting up fireworks inside the daycare.

Duncan's reaction to Courtney not stopping them from lighting up fireworks inside the daycare.

Duncan asks Courtney if she doesn't want to light up the fireworks herself.

Courtney tells Duncan that she wants to..

.. but Harold stops them.

Chef tells the kids that cucumbers are a fruit.

The kids run out of the daycare.

The daycare blows up.

The kids as they watch the fireworks.

"I guess the world just isn't ready for the truth about fruits and vegetables."
- Chef

Duncan is surprised by what Courtney did.

Courtney is happy that she won the bet.

Courtney tells the officer that her handcuffs are supposed to be tighter.

Duncan laughs at Courtney because she lost the bet.

Retrieved from "https://totaldrama.fandom.com/wiki/Know_it_All?oldid=1589536"
Community content is available under CC-BY-SA unless otherwise noted.