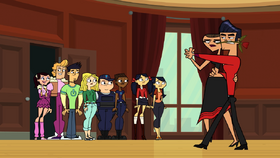 The four remaining teams head for Argentina to partake in a challenge filled with tango and rodeo. One team continues their nefarious ways in messing with another team in order to continue their winning ways, while one's continued attempt to be less aggressive is furthered along with another's encouragement. After going through too many trials of their own, someone finally confesses their love for another, but the final race to the finish leads to a problem caused by another to throw them off a mountain; forcing new lovers out of the race but bringing back two others in their place.

The final four receive their tips and head for their next destination: Buenos Aires, Argentina. Devin is convinced that nothing will go wrong, causing Carrie to worry that he may have jinxed them. At the airport, Kitty manages to convince the ticket holder to book the Ice Dancers and the Cadets in the seats next to the restrooms, causing the two teams to swear revenge on the Sisters later on for doing so. Devin, once again, tries to confess to Carrie about his feelings, only to chicken once again as he drops hot tea on himself. Once in Buenos Aires, the teams face an All-In where they must perform the tango at a local dance academy to receive their tip before taking a cab to a ranch. The Ice Dancers easily complete the challenge due to being dancers, easily taking the lead while the other teams complain about how unfair it is. The Police Cadets are too aggressive with their dance and fail. For the Best Friends, Devin has taken tango lessons with Shelley and is confident he will be able to profess his love for Carrie, but ends up injuring her during their dance. The Sisters are the second team to finish and head for the Don Box. The next challenge is a Botch or Watch where one team member must ride a horse and use a boleadora to tie up their team’s emu, and take it to the Chill Zone on Mt. Aconcagua.

In revenge, Jacques sabotages the Sisters by coating their emu with vegetable oil, but ends up spilling some of it on himself too. Meanwhile, back at the academy, the Cadets finish their tango, leaving the Best Friends to fall behind. Carrie becomes upset at Devin for repeatedly injuring her. When Devin mentions Shelley, Carrie gets frustrated and takes charge, allowing them to finally complete the dance. At the ranch, both Kitty and Jacques struggle during the challenge due to the oil. For the Cadets, MacArthur’s horse refuses to move after she keeps yelling at it. Sanders comes over and calmly soothes it, putting the Cadets in the challenge. Kitty becomes frustrated after her boldeadora keeps slipping off and tackles the emu, sending both of them down the mountain (though she snaps a selfie), followed by Emma, who is concerned about her sister. Jacques gets the oil off his hands by rubbing it in his hair, allowing him to tie up his emu.

MacArthur manages to capture her emu next, and the two teams race for the Chill Zone. In a close footrace, the Ice Dancers manage to beat out the Cadets for first, much to Don’s amazement. The Best Friends are the last at the ranch. Devin manages to snag his emu, but notices they are the only ones there. Carrie gives up hope, and Devin finally tells Carrie that he’s in love with her. The two embrace and have their first kiss, before noticing the Sisters heading up the mountain. Realizing they are still in the race, they head for the Chill Zone. In order to catch up with them, Kitty ties herself to the emu. In another close footrace to the Chill Zone, the Best Friends barely manage to beat the Sisters and take third. However, Kitty, unable to steer the emu, crashes into Devin, sending him over the cliff’s edge. Kitty is wracked with guilt, but Emma assures her it's a non-elimination round, meaning the Sisters are still in the Race.

Devin is too injured to continue with the race and is evacuated by helicopter in a body cast. Before the Best Friends depart, Don tells them they must choose one team to return to the competition in their place. Carrie chooses the Surfer Dudes, as they helped the other teams win back in Vietnam. The producers call Brody and Geoff, who are hanging at the beach, having them come back to the show. As the Best Friends leave via helicopter, Carrie reminisces over the good times they had during the race and professes her love for Devin. However, she hears a muffled Devin mention “Shelley” one last time and tells him to stop talking.

Kitty takes a selfie with Emma.

The Cadets, Ice Dancers and Best Friends get into the taxies.

Sanders wants to get rid of the Ice Dancers.

An elephant crushes the taxi the Best Friends are in.

Kitty requests the seats on the back of the plane for the Cadets and Ice Dancers.

The Ice Dancers and Cadets can't stand seating next to the bathrooms.

Devin spills hot tea on himself...

...so Carrie pours her water on Devin to help him.

Kitty tells Devin that he needs to tell Carrie how he feels.

The sisters get the tip in Argentina.

The Ice Dancers feel confident before the tango challenge.

Sanders and MacArthur start doing their own dance.

The local almost barfs at MacArthur's performance during the challenge.

The Sisters fail at the tango.

Kitty wants to take a selfie with the tango instructor.

Jacques reads the Botch or Watch.

Jacques makes it harder for The Sisters to the catch their emu by pouring vegetable oil all over it.

Devin picks up a rose for his tango with Carrie.

Carrie and Devin experience difficulty with the tango challenge.

The cadets complete the tango challenge...

...much to Carrie and Devin's sadness.

Sanders is frustrated that she and MacArthur don't know how to work as a team.

Carrie has had enough when Devin mentions Shelley again.

Jacques tries to catch his and Josee's emu, but the boleadora wraps around his face.

MacArthur has some trouble getting the horse to listen.

Sanders "tames" the horse their team is using for the challenge.

Sanders wonders why that kind of talk never works on MacArthur.

Kitty jumps on the emu.

Josee hugs Jacques after he completes the emu challenge.

MacArthur manages to catch the emu.

Kitty takes a selfie with the emu.

Kitty got the emu.

The Cadets and the Ice Dancers race to the Chill Zone.

Josee and Jacques hug after they find out they came in first place.

Devin finally reveals Carrie his feelings for her.

Emma and Kitty in their taxi ready to beat the Best Friends to the Chill Zone.

Best Friends an emu racing to the chill zone.

The Sisters and Best Friends in a race for second to last place.

Kitty's emu runs into Devin, knocking him off a mountain.

Carrie and the emu stare in horror as they watch Devin's horrific fall.

Emma calms down Kitty after she threw Devin off the mountain.

Don reads the rules and tells the Best Friends they must choose a previously eliminated team to bring back into the race.

Geoff gets a call about returning to the show.

Brody making a sculpture of MacArthur out of sand.

Retrieved from "https://totaldrama.fandom.com/wiki/Last_Tango_in_Buenos_Aires?oldid=1636069"
Community content is available under CC-BY-SA unless otherwise noted.