The Vegans with Miles

Don, Dwayne (one-sided, on her side)

Emilie-Claire Barlow
Laurie was a Total Drama Presents: The Ridonculous Race contestant as a member of The Vegans with Miles.

Laurie is a nature-loving vegan with an "Earth first" attitude and pure intentions. She is a serene person but any perceived injustice against nature will send her into an emotional tizzy. Laurie and her friend Miles have traveled extensively and learned a deep respect for different cultures as well as their local flora and fauna. She, along with her partner, believes that peace and knowledge are very important. While Laurie can be somewhat aloof and pretentious at times, her tree-hugging heart is in the right place. However despite her calm composure, when she becomes provoked, her temper flares up in a fiery passion.

Laurie, and her partner Miles are introduced in None Down, Eighteen to Go - Part 1, where they are first seen stopping traffic on the street in order to let a butterfly pass. Laurie explains in their interview that she and Miles are planning to use the prize money to fund their favorite charities. The two are considered among the weaker groups of the Race, often being in last place due to them using an environmentally friendly method to travel instead like walking instead of riding their camel or pedaling their moped.

While the Vegans perform well in Mediterranean Homesick Blues as compared to the previous two legs, their luck begins to run out in Bjorken Telephone. After arriving at the ice caves, Laurie and Miles choose to dig for fossils in the Either/Or challenge. They manage to free their fossil using "reiki energy", and as they push it back to the entrance, the two stop to thank the fossil spirits of the cave. However, this gives the fossil enough time to slip away and it ends up in the hands of Dwayne and Junior. At the Chill Zone, Laurie discovers that Dwayne has taken her fossil, but Don refuses to let him give it back to her. This causes a rare moment of intense rage from Laurie, and she lashes out at Dwayne, swearing that karma will get him for his actions. Because they do not have enough time to dig another fossil, Laurie proposes that they do the other Either/Or challenge, eating the feast. The two have a hard time doing so as they are eating the very thing they swore to protect themselves against, meat. Even after they finish their plate, they are the last team to reach the Chill Zone. However, upon hearing that this is a non-elimination round, Laurie becomes angry at Don and begins to beat him up.

Luck begins to work in the Vegans' favor in Brazilian Pain Forest as not only does their flight overtake the first, due to Dwayne's mishap, they also get first place during the first leg of the challenge. However, Mickey accidentally knocks Laurie face first into the ant-filled mitten, causing her face to swell up from the bites and her vision to be blurred. After finishing the final challenge, they manage to reach the Chill Zone first but were penalized as they do not follow the instructions for the final challenge properly. By the time their penalty is over, the Rockers have reached the Chill Zone and the Vegans are eliminated. To make matters worse, Don reveals in the next episode's recap that the two crash landed on an island full of cannibals. To make matters even worse, Laurie may have developed a liking to meat, as she made a "yummy" sound when Miles brought up the feast in their final interview.

In A Million Ways to Lose a Million Dollars, Laurie watches the final moments of the Race with the other eliminated contestants. At this point, her face has fully recovered from the bullet ant bites. After the winner is declared, she joins the rest of the cast for a final group shot.

Laurie makese a cameo appearance in Life of Pie in a photo shown by Pete. With the exception of her shirt is now pink, her design is otherwise the same with her counterpart.

Laurie with a swollen face. 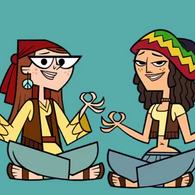 The Vegans are introduced.

Laurie lists of the charities they would fund with the money.

Laurie and Ellody easily pick out the spices in unison.

Laurie walks with the camel.

The Vegans arriving at the Chill Zone in Morocco as the third-last team.

The Vegans in Morocco.

The Vegans are trailed by the Tennis Rivals in the catacombs of Paris.

The Vegans use "Reiki" energy to melt a fossil.

The Vegans take a break from pushing their fossil.

Don ignores Laurie pointing out that Dwayne stole their fossil.

Laurie becomes angry at Dwayne for stealing her team's fossil.

Desperate, Laurie decides that they must eat the feast.

Laurie is shocked and angry when she is told that the leg was a non-elimination round.

Miles slaps Laurie in the face.

Mickey accidentally knocks Laurie into the mitten, causing her face to swell up.

The Vegans cross on a vine.

A close-up on Laurie while she crosses on a vine.

The Vegans come in first but get penalized.

The Vegans are eliminated.

The Vegans leave the race.

Retrieved from "https://totaldrama.fandom.com/wiki/Laurie?oldid=1684704"
Community content is available under CC-BY-SA unless otherwise noted.