Lies, Cries and One Big Prize 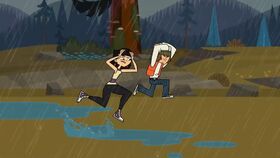 Sky (French Canada, USA, USA (iTunes), USA (Netflix), Israel, Italy, Australia, Norway, Romania, Hungary, Denmark, France)
Shawn (English Canada, Croatia, Bulgaria, Netherlands, Poland, Russia, Brazil, Latin America, Turkey)
The final two face each other with some needed assistance across the island that had been altered by someone's hand. To further the danger, the host makes things worse by revealing damaging dirt to the previously defeated, making the finalists work their hardest to make it to the finish line or else lose the money to the losers. Ultimately, someone does finish the challenge and the season ends well for some, but not others.

The episode starts off with Sky trying to get some sleep, while Shawn is trying to stay awake. Moments after, Shawn falls off of the tree and Sky manages to shut her eyes. Chris sends them over to begin the finale. Chris tells Shawn and Sky that they get to pick one former contestant to act as their helper. In the confessional, Sky says her first choice would be Jasmine if she wasn't into Shawn, though taking that into consideration she's unsure of who to choose. While Shawn ranks all the contestants in terms of physical strength, and adds he would be fine with any former contestant other than Leonard. However, Chris reveals that he lied to them and that their partners would be randomly selected via slot machine. Shawn goes first, ending up with Jasmine, and decides to stick with her as his partner. In Sky's turn, the machine lands on Dave and given the awkward circumstances prior to Dave's departure, Sky asks to try one more time, but once again it lands on Dave. This forces him to be Sky's helper. Jasmine and Dave arrive via helicopter. Jasmine and Shawn are happy to be reunited, but Chris tells Dave about Sky's reluctance to have him as her helper which saddens him. Sky however, really wants Dave to help her, so she kisses him and tells him that she re-picked, because she wanted to focus on the challenge. The two seem to be happy and they begin the challenge.

The first part of the challenge involves skiing down a mountain using all kinds of junk available. Jasmine goes down on a pair of skis, while Shawn holds onto her. Due to this, Shawn gets through unharmed, but Jasmine becomes lodged in a snowbank and emerges freezing cold. Sky and Dave however, have a hard time skiing down, as they can't find good parts to ski with. The two end up crashing into a giant snowball and become trapped. However, when Sky sees the robot-cat from Scarlett Fever, she begins taunting it enough into firing a laser at them, melting the snowball and freeing the two. However, it ends up burning Dave's hair off in the process. Next, they have to go through an eight-foot deep mud pit. Jasmine agrees to walk while Shawn hangs on, a decision that he feels bad about. However, Jasmine has a hard time getting through due to her claustrophobia, and starts going backwards. Sky walks under the mud and is able to successfully catch up with Shawn. When Sky and Jasmine bump into each other, this results in Dave and Shawn getting into a slap fight. Chris declares the brawl to be boring and sends in Scuba Bear 3.0, armed with a jet-pack, which slams into the mud pit and knocks all four of them onto dry land.

After Chef hoses them off with a fire hose, Chris decides that they need to take a break. He tells them all to sit down as he shows the helpers leaked clips of their respective partners. For Jasmine, Chris shows all of Shawn's confessionals where he explains how he doesn't want to share the money with her, and shoots down her idea for the money if it were shared. For Dave, Chris shows Sky's audition tape, where she states that, if she is to be selected for the show, she'll miss her boyfriend, Keith. Both are furious about this, and refuse to help their partners any further. Chris then gives the helpers controllers to control the island, and an ultimatum: If they successfully stop the two finalists from reaching the finish line in ten minutes, the helpers will be allowed to split the money 50-50.

Shawn and Sky both struggle with the challenge, trying to avoid the obstacles such as trees falling, winter conditions, and trees being fired at them like rockets. While Jasmine eventually starts to show sympathy for Shawn, Dave madly enjoys hindering Sky, wanting to burn his share of the money in front of her if he wins, out of spite. Just as they are about to reach the finish line, Dave creates a tall mountain that rises up directly beneath the finalists and traps them. Chris declares that there are only 20 seconds remaining. Shawn is happy that Jasmine will get the money, since neither will probably cross the finish line. Sky on the other hand, thinks it's not fair, repeatedly stamping her foot, and causing the mountain top to crack and create an avalanche. Jasmine shows great concern while Dave eagerly cheers, as the two finalists roll across the finish line under the snow.

Just as Chris declares that the helpers have won, Shawn sticks his arm up through the snow first, holding a flower. In response, Jasmine runs off to help Shawn while Dave screams in fury. Jasmine gasps as she runs over and pulls him out of the snow before Chef tries to. Shawn is thrilled to hear that he won, and he asks her if it is still okay to split the money. Jasmine kisses him in response, indicating all is forgiven between them. Chris, Chef, the finalists and Jasmine leave the island in the helicopter.

Just as Chris declares that the helpers have won, Sky sticks her arm up through the snow first, and waves. In response, Jasmine runs off to help Shawn while Dave screams in fury. Chef then walks over and places her on a stretcher. She excitedly announces that she won the competition, as Chef wheels her off screen. Meanwhile, Jasmine arrives at the finish line and after digging out Shawn, she forgives him and the two share a kiss. Chris, Chef, the finalists (with the winner carrying the case), and Jasmine leave the island in the helicopter.

As Chris is ready to sign off, he feels that they forgot someone. Dave is shown to be left behind on the island, very upset about his loss, but thinks things can only go up from here. He then hears a growl and turns to see Scuba Bear 3.0, covered in mud, right behind him. Dave mutters "Of course" right before the episode ends.

The million dollar case shown in the recap.

...or Sky managed to sleep well.

Chris introduces the monitor which is going to select their helpers.

Sugar appears as one of the potential helpers...

...causing both Sky and Shawn to cringe.

Chris throws a coin to decide who choose their partner first.

Shawn is the first to choose...

...and it lands on Jasmine.

Sky is the next to choose...

The chinook brings Dave and Jasmine back to the island.

Shawn is happy to see his partner...

Jasmine and Shawn make fun about Dave and Sky.

Chris reminds Dave of what happen between him and Sky.

...giving him a boost in confidence.

Dave is confused about the events of Scarlett Fever.

The challenge consists into getting down a mountain...

...and a final run to the finish line.

Jasmine helps Shawn in the challenge.

Sky at first think that's not a good idea...

...but Dave manages to convince her that it is.

Jasmine celebrates the lead that she and Shawn have...

...but she ends up crashing into a pile of snow.

"The boy gets the girl, the girl gets the money...wait, that sounds wrong."

Dave and Sky go down the mountain.

Jasmine and Shawn at the end of the challenge...

A freezing Jasmine emerges from the snow.

A mechanical kitten appears near Dave and Sky.

...and melting the snowball trapping them.

Shawn remembers of the promise that he made with Jasmine.

Dave is terrified to enter the mud pit.

Dave and Sky diving into the mud.

The former friends fight each other.

All four contestants are thrown out of the mud pit.

Sky mocks Shawn for blabbing in the confessional.

Sky mentioning her boyfriend, Keith in her audition tape.

Chris feints innocence and confusion regarding Sky and Dave's situation.

Shawn once again loses Jasmine's trust in him.

Dave has a plan for the money: burn it in front of Sky.

Dave pretends to like Jasmine's idea to get on her good side.

Dave becomes satisfied that Sky is about to lose.

"It's all uphill from here!"

While Shawn is fine with not winning the money, Sky isn't.

Dave is left on the island with Scuba Bear.

Jasmine rescues Shawn from the snow in his ending.

Shawn is declared the winner.

Sky gets hauled off by Chef Hatchet in her ending.

Sky is put onto the stretcher before realizing that she just won.

Jasmine rescues Shawn from the snow in Sky's ending.

Retrieved from "https://totaldrama.fandom.com/wiki/Lies,_Cries_and_One_Big_Prize?oldid=1629300"
Community content is available under CC-BY-SA unless otherwise noted.