watch 03:27
Wiki Targeted (Entertainment)
Do you like this video?
Play Sound

The following is a list of injuries received by every character on Total Drama.

sliced in Are We There Yeti?

Izzy hits her chin on the dock.

Tyler lands on a buoy, after jumping off the cliff.

Harold lands in the splits after jumping off the cliff.

Izzy getting a rope burn on her tongue.

Katie and Sadie after sitting on poison ivy while urinating in the woods.

Harold gets hit by a hammer and Bridgette's board.

Ezekiel getting choked by Eva.

Courtney getting hit by a dodgeball.

Lindsay after being hit by multiple dodgeballs.

Geoff gets hit excessively hard by a dodgeball.

Beth getting hit by multiple dodgeballs.

Courtney, after a stage light falls on her head.

Cody after being mauled by a bear.

Courtney kicking Duncan in the groin.

Trent gets hit in the head by a box of oranges.

Heather after lighting the flambé.

Trent after being poisoned.

DJ getting hit in the groin by a crab apple, courtesy of Chris.

Courtney after getting repeatedly hit by crab apples, courtesy of Sadie.

Owen getting punched by a moose.

Trent after falling out of a helicopter, courtesy of DJ.

Heather getting slap in the face by a magazine, courtesy of Lindsay.

Duncan is hit by turtles.

Lindsay getting her hair pulled by Eva.

DJ while a snake wraps him up tight.

Owen getting a brain freeze.

Heather swatting Lindsay with a flyswatter.

Owen, after his wipe out.

Owen after falling off a cliff.

Heather getting a tranquilizer dart on her butt, courtesy of Izzy.

Courtney running into a backdrop.

Izzy gets hit in the stomach with a paintball shot.

Trent has a hard landing.

...And Harold all got electrocuted by eels.

Izzy bites Owen in the arm.

Owen broke his jaw after Chef threw a book at him.

Duncan gets beaten up by Courtney in a challenge.

Chris gets knocked out by Chef.

Lindsay and Beth are severely injured in The Princess Pride.

...And Lindsay got electrocuted.

Courtney hits Duncan in the crotch with the guitar.

Lindsay, after Owen jumps on her.

Courtney after fighting with some sharks.

A rock hurled Duncan in the stomach.

Josh gets hit by a camera, courtesy of a now enraged Eva.

Lindsay and Tyler hit each other while trying to high-five.

Tyler falls down the Pyramid of Giza.

Courtney and Gwen are both dragged down the pyramid by Duncan.

Cody gets kicked in the groin, courtesy of Courtney.

Ezekiel is poked in the eye by a stick.

DJ being bitten by a turtle.

Chef gets kicked by Izzy.

Leshawna beats up Heather during the dance challenge.

Alejandro gets kicked by Sierra.

Owen getting kicked in the groin, by Izzy.

Both Izzy and Owen are crushed by the Total Drama Jumbo Jet.

Courtney and Gwen gets electrocuted.

Heather lands painfully on the water.

Gwen gets zapped by eels.

Chris pushes Noah off the cliff.

Cody and Sierra land painfully on the pool.

Courtney and Heather after their run.

Owen and Noah land painfully on the pool.

DJ, after his run was sabotaged by Alejandro.

Duncan gets punched by Cody.

Gwen getting slapped by Courtney after Cody wins for Team Amazon.

Courtney kicking Duncan in the groin, while breaking up with him.

Tyler triggers a mine and is blown away.

Sierra jumps without the bungee and plummets into the ground.

Sierra hit by a cannonball while saving Cody.

A stage light falls on Blaineley.

Noah gets hit in the groin, after receiving a Pop-Up Chris Head.

Duncan getting brutally attacked by Ezekiel.

Alejandro is flattened by a boulder.

Sierra, after blowing up the Total Drama Jumbo Jet with the lit firecrackers on Cody's birthday cake.

Blaineley is put in a full body cast after her Drop of Shame.

Cody is hit by a baton and knocked off a platform.

Ezekiel sinks into the lava.

Alejandro, after getting trampled by the cast and burned by lava.

Alejandro's scorched remains after being hit by the volcano's lava.

Cameron landed on a rock.

Anne Maria smashes into her team totem pole multiple times and then falls hard onto the ground.

Brick and Jo after crashing into each other.

Brick after getting hit in the face by a cannonball.

Cameron gets bitten by the mutant maggot.

Jo punching Brick to spit out the spoon.

Sam after getting punched by the mutant beetle.

Bridgette after she is hit by an explosive.

Sam hits the ground after being thrown by Sasquatchanakwa.

Lightning, after fighting some crocodiles.

Scott is burned by the mutant goats.

Chris gets thrown into the communal bathrooms by Scott. 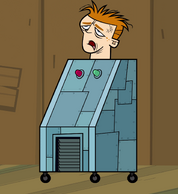 Scott is placed in Trauma Chair after being mauled by Fang.

Lightning gets struck by an actual lightning.

Chef kicks Lightning out of the plane.

Chef kicks Jo out of the plane.

Courtney after Sierra enthusiastically jumps in the carriage before she gets out.

Lightning after Heather strikes him in the face with a shovel.

Heather dropping the piece on Jo.

Sam getting hit in the groin.

Sam is attacked by crabs.

Scott striking Mike with a shovel.

Sam gets stung by jellyfish.

Scott gets a spring in his eye and wood and nails on his fingers.

Scott gets hit by leeches for the third time in a row.

Courtney gets hit by a bucket of leeches.

Alejandro gets attacked by rats.

Scott gets kicked excessively hard by the boot.

Cameron falls down a tree and is pecked by birds.

Sam gets stung by bees.

Alejandro gets stung by a bee.

Due to a moon harvest moon, some animals attack the contestants.

Izzy takes a beating from Mal.

Courtney and Gwen fight each other during the challenge.

Chef throws coconuts at the cast.

Cameron gets crushed by a pile of falling rocks.

Mal gets attacked by snapping turtles.

Alejandro repetitively gets injured by Mal in The Obsta-Kill Kourse.

Mal pushes Gwen into the swamp.

Zoey gets electrocuted in The Bold and the Booty-ful.

Scott gets punched by a boxing glove.

Heather and Alejandro fighting for the million dollars.

Max gets hit by a tennis ball.

Beardo, after getting hit by tennis balls.

Leonard getting hit by tennis balls.

A TV crashes on Sugar's face.

Max gets run by a horde of moose.

Sky gets many bees stings in Twinning Isn't Everything.

Shawn fails to lift up a wounded Jasmine and she falls on top of him.

Shawn and all the "zombies" piled on the ground after he knocks them off the tree.

Max is repeatedly electrocuted trying to open the security door to the control room.

Shawn runs into a hurdle and gets struck in the groin in Pahk'd With Talent.

Jasmine after skiing through snowdrifts.
Retrieved from "https://totaldrama.fandom.com/wiki/List_of_Total_Drama_injuries?oldid=1698632"
Community content is available under CC-BY-SA unless otherwise noted.