The following is a list of pets on Total Drama.

Angus and Vampyra are Gwen's lizards that are mentioned in The Aftermath: II when she was introduced by Geoff. Their names are the question relevant to Gwen in Mutiny on the Soundstage. Their names were revealed in the Mutiny on the Soundstage as one of the questions posed to Beth for the challenge. In I See London..., Gwen mentions that she trained both her lizards to be obedient and uses the same tactics on the guard dogs.

Big Bertha is Beth's pet pig back at her farm, which she has raised since she was only a piglet. Currently, Big Bertha hasn't been mentioned or seen in the series, but is mentioned in Beth's biography.

Brittany is Duncan and Courtney's pet raccoon. The two fight over Brittany for custody, and even end up getting lawyers involved after Total Drama Action, despite the fact that Duncan dislikes Brittany a bit, as seen in Celebrity Manhunt's Total Drama Action Reunion Special.

Bruiser is Heather's white pet cat. He has only appeared in Celebrity Manhunt's Total Drama Action Reunion Special. In this appearance, he is seen licking Heather's mouth while she is sleeping, which Gwen makes fun of in her online blog, saying that Bruiser and Heather were kissing.

For more information about this section, visit: Bruno

Chef is Topher's pet cat, named after Chef. He is first seen taking a nap while Topher shoots his audition tape for Total Drama: Pahkitew Island. His owner yelling into a megaphone aggravates Chef enough that he viciously attacks him. Topher screams for the remainder of the audition.

Sierra's fish are mentioned in Oh No U Di'n't!!! While the number of fish she owns is unknown, it is mentioned that they are all named Chris.

Chris's three dogs, two of which are named Banjo and Todd, are mentioned by Sierra in Celebrity Manhunt's Total Drama Action Reunion Special. The third one's name is never revealed, due to the confessional's battery running out before Sierra can finish her sentence.

For more information about this section, visit: Cody 1 and 2

For more information about this section, visit: Cody Jr. 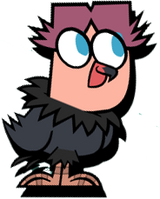 Dander Boy is Pythonicus' cat sidekick in Super Hero-ld. Together, the two sabotage the contestants' work while they attempt to make their costumes. Dander Boy, at one point, scratches Leshawna's costume. He later is one of the judges for the first part of the challenge, and is frightened by Courtney's super power.

For more information about this section, visit: DJ's bunnies

Ezekiel's bull is first seen in Celebrity Manhunt's Total Drama Action Reunion Special, when there is a clip of Ezekiel back at his home near his farm. He becomes tangled up in his bling, which causes him to fall over; his pet bull then leans in to kiss Ezekiel. This is most likely because of the cowbell noise that Ezekiel's bling made. Nothing else is known about his bull at the moment. In Brunch of Disgustingness, a bull very similar to it appears briefly in a clip in which the bull reacts to the dish of bull testicles. It noticeably looks just like Ezekiel's bull, and the background looks just like the farm seen in Ezekiel's audition tape.

Harold brings a red ant farm with him to Camp Wawanakwa. It only appears in Not Quite Famous, when Gwen uses it to get revenge on Heather for stealing and reading her diary and for avoiding getting herself eliminated afterwards by manipulating her teammates. When Heather falls asleep, she asks Harold if she can borrow his ant farm. She then dumps the red ant farm into Heather's bunk. Heather runs out screaming, covered with the ants, and eventually trips. This satisfies Gwen, who knows that she has successfully gotten her revenge.

The ant farm originally appears in the Camp TV promo. Lindsay is seen with many red ants all over her face, as she screams in agony.

For more information about this section, visit: Irene

Izzy mentions her dog in The Sand Witch Project, when she states that her dog is afraid of her.

Izzy's pet rock is mentioned in Full Metal Drama. While not technically a pet (unlike the others on this list), she mentions to tell her rock that she loves her when she jumps off the plane in the first part of the challenge.

For more information about this section, visit: Larry

For more information about this section, visit: Leshawna Jr.

Lindsay's chihuahua has only been seen in her audition tape. It is small and light enough for Lindsay to pick up. So far, it has not been seen on the actual show, but Lindsay mentions it in That's Off the Chain!, in which she says in a confessional that her dog has "the cutest curly little butt," comparing it with her teacher's hairpiece.

For more information about this section, visit: Loki

MacArthur mentions having a dog in My Way or Zimbabwe, when she's about to take a selfie with a rhino. She states that the trick to taming an animal is to show them you're the boss, and that it works with her dog. She is shocked when it doesn't work out well with the rhino.

In Shawshank Ridonc-tion, MacArthur states that she wanted to call her pet cat, Mr. Princess, if she wins the free phone call reward.

Leshawna's rabbit is mentioned by Leshaniqua in One Flu Over the Cuckoos when she says that Leshawna doesn't cry, "Not even at Mr. Bunny Rabbit's funeral."

Noah's golden labrador is first mentioned in Haute Camp-ture, when Noah states that it drools less over a rib-eye steak than Courtney drools over Duncan. It is mentioned again in Can't Help Falling in Louvre, when Noah uses an imaginary ball trick to distract the Sasquatchanakwa, explaining that the tactic always works on his dog.

Owen's dog is mentioned in I Triple Dog Dare You!, when he mentions that the kind of dog food he must eat as part of a dare is the kind of food that his dog loves. Currently, nothing else is known about it.

Petey was Duncan's pet dog, when he was six years old or less. Petey ran away when Duncan was this age. It has also been proven that Duncan has a "soft spot" for the loss of his pet. It has been mentioned once, when Duncan tells the story to Leshawna.

"Miss Puffycheeks" is Zoey's hamster. She is first seen in Zoey's audition tape. Her cage is on a table that apparently doubles as a sewing station. Her name is not revealed until The Enchanted Franken-Forest, when Zoey mentions her in a confessional. Miss Puffycheeks is an exceptionally strong hamster, as Zoey comments she is stronger than Cameron, shortly before a clip shows Miss Puffycheeks punching away a cat.

In the audition tape, Miss Puffycheeks had a light brown fur but in the aforementioned episode, its color was light orange.

Nugget is a highly aggressive chicken from a petting zoo in Cluckwork Orange. As it is seen laying eggs several times in the episode, Nugget is actually a hen though Jude thought it is a male. The zookeeper warns the children of the daycare that it is the most dangerous animals in the zoo and is easily provoked. True enough, the chicken pecks Owen's hand when he attempts to pet it and then gets into a glaring contest with MacArthur. However, Jude easily wins it as the chicken sees him as a fellow chicken. When class is over, the chicken stowaway in Jude's lunch and wants to be by his side. Jude names the chicken Nugget and gives him his clothes as disguise. While the chicken is friendly towards him, it doesn't like the other children, attacking several of them. Eventually, Jude realizes how naughty Nugget is and decides to set her free on the roof of the daycare. Nugget refuses to leave but after being thrown from the roof, it returns after bouncing off a car. Now seeing Jude as an enemy, Nugget attempts to attack him but is mauled by a werewolf-turned Cody.

Richard Swimmins is the daycare's pet goldfish in Aquarium for a Dream. In order to teach the kids responsibility, Chef tasks the kids to look after Richard. The kids love Richard but doesn't know to to take care of it properly. After Izzy accidentally kills Richard by overfeeding it, Chef quickly replaces it with a new one. This continue for some time until the kids found out the truth. The dead Richards are buried at the backyard where they are eventually dug out and eaten by stray cats.

Rocky the rock is an actual rock with a smiley face painted on it. At the end of Aquarium for a Dream, Chef introduces the kids a new pet, Rocky. After the whole incident with Richard Swimmins, Chef believes that the kids can take care of a rock better than a fish. Unfortunately, when the kids throw Rocky into the air, it his the fan and is launched into Chef's office where it ricochets around the room for a while before breaking Chef's aquarium, killing the fishes inside.

During El Bunny Supremo, Ennui mentions having a black kitten that he got for Christmas in an interview. He then says that one day he slipped out the door and never came back.

For more information about this section, visit: Scruffy

During Down and Outback, Spud mentions that he owned many snakes. According to Spud, they had eaten many things including his phone, a bicycle, and a neighbour's cat. Because to this, Spud is able to recognize what is inside a snake's stomach.

Steve and Steve are the names of Brady's two dogs. Their names are briefly mentioned by Beth in Super Hero-ld.

Sugar's dog is mentioned in Mo Monkey Mo Problems. According to Sugar, she once had to pull out a pigeon (which was also her dinner) from the inside of her dog.

Suzanne is an alligator Beth befriends with in Cluckwork Orange. It is one of the animals the mobile petting zoo brought to the daycare. After opening its mouth, Beth enters the alligator in order to check for cavities until MacArthur removes her. It was thought to have return to the animal truck after class is over but at the end of the episode, it turns out that the alligator, like Nugget the chicken, has been left behind and playing with Beth. When Beth overheard Courtney telling Jude that dangerous animals are not allowed in the daycare, Beth tells the alligator (whom she named Suzanne) to hide in another room. Unfortunately, it jumps through a window and into Chef's room, attacking the teacher and destroys his newly bought trombone.

Vince is an albino alligator that was DJ's first pet. DJ lost Vince when he accidentally flushed him down a toilet, but eventually DJ reunites with a large adult Vince in the sewers of New York, as shown in an exclusive clip of Broadway, Baby! It also appears in the exclusive clip of Heroes vs. Villains chasing Lindsay after she took the Flush of Shame.

Whiskers is Jasmine's pet cat. She apparently is easy to provoke and when she is, she is quite vicious in behavior. Jasmine seems to adore her regardless of this, often excusing her acts of violence. She is first seen during Jasmine's audition where she jumps on her arm. While she seems tame at first, she ends up biting her owner, who falls over. Jasmine quickly recovers and plays it off by telling the camera, "She's pretty playful."

Whiskers is mentioned again in Sky Fall when Jasmine compares her being just as, if not more, aggressive than the robot crocodiles. A home video of Jasmine trying to take her cat for a bath is then shown. In response, Whiskers attacked her, forcing Jasmine to submit and not bathe it.

Retrieved from "https://totaldrama.fandom.com/wiki/List_of_pets?oldid=1640469"
Community content is available under CC-BY-SA unless otherwise noted.