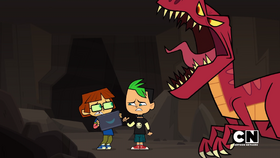 When the class nerd's warnings not to mess with the clock go ignored by the delinquent, they and the others are forced to save themselves.

Gwen asks Owen what has him in such a good mood.

Owen starts talking about everything he loves about the daycare.

"Except for lunch, those are all made up."
- Gwen

Duncan considers the daycare to be boring.

Harold tells Duncan that days have gotten longer over time.

"Leave it to Duncan to destroy the world."
- Harold

Chef asks the kids to guess what he's about to say.

The kids try to guess what Chef's about to say.

Izzy thinks that Chef is an alien.

Chef tells the kids that thanks to daylight savings time, the day will be one hour shorter.

"Great. Now we will all die an hour earlier."
- Gwen

Chef tells the kids that every year on this day, people move their clocks forward one hour.

The kids wonder why do people do that.

Chef doesn't know why people do that either.

Izzy asks Duncan if he's trying to break out of the daycare again.

Duncan wants to move the clock ahead so that they can all go home earlier.

Harold tells Duncan that if he moves the clock ahead, anything from the past or future could appear in the daycare.

Harold says that he knows this from episode 6 of Cracked Mirror.

Harold claims that Duncan never listens to him when he says something bad is gonna happen.

Harold tells Duncan to not shake the soda bottle.

A giant ant steps on Duncan for stepping on an ant hill.

Duncan touches the lamp despite Harold telling him not to do so.

Duncan gets transformed into a chicken.

Duncan ignores Harold's warning and moves the clock ahead.

By moving the clock ahead, Duncan accidentally opens up a portal.

Harold thinks that Duncan tore a hole in the fabric of time.

Duncan doesn't realise what he has done.

A caveman drops out of the portal.

A mummy drops out of the portal.

Owen's reaction to the mummy eating his lunch.

A velociraptor drops out of the portal.

The kids' reactions to the raptor.

Elvis Presley drops out of the portal.

Duncan tells the kids to keep it down or else Chef will hear them.

Izzy goes outside with the caveman.

The mummy chases after Beth and Owen.

Harold is mad at Duncan for what he did.

Beth tries to feed the mummy so that he won't eat them.

Owen catches all of the food Beth throws out of the fridge.

Cody thinks that sneaking is fun.

Noah accidentally steps on a toy.

Cody and Noah notice the raptor behind them and begin to scream.

Harold tries to watch the ending of episode 6 of Cracked Mirror.

Izzy and Jude like watching the caveman trying to smash gophers.

Beth runs out of food to give to the mummy.

Harold thinks that him and Duncan are lost.

Duncan insults the raptor without him realising that she's standing right behind him.

The gophers stopped playing with the caveman.

The caveman tries to hit MacArthur and another construction worker.

Izzy thinks that the caveman is perfect.

Owen refuses to give his potato chips to the mummy.

Harold and Duncan manage to get out of Duncan's escape tunnel..

The caveman hits the raptor which makes her fall into the ground.

The raptor comes out of the ground and goes after the kids.

Duncan tells Izzy to use a barricade.

Owen decides to give his potato chips to the mummy.

Harold tries to watch the ending of episode 6 of Cracked Mirror again, but his Iphone battery dies out.

Owen thinks that they're all doomed.

Gwen tells the kids that she has seen the ending of episode 6 of Cracked Mirror.

Gwen tells the kids to just spin the clock backwards.

The raptor breaks into the daycare.

Harold opens up the portal again.

The raptor flies back into the portal.

Cody says goodbye to the raptor.

The raptor takes Cody with her.

Beth calls the raptor a monster for taking Cody with her.

Jude tries to make Izzy feel better about the caveman leaving them.

Chef asks the kids if they would like to learn about daylight savings time.

"I traveled through time!"
- Cody

Retrieved from "https://totaldrama.fandom.com/wiki/Look_Who%27s_Clocking?oldid=1603317"
Community content is available under CC-BY-SA unless otherwise noted.