Lord of the Ring Toss

Lord of the Ring Toss 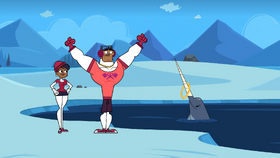 The eight teams head to the Arctic Circle to play ring toss with narwhals and to build an igloo. Someone has confidence issues with the initial challenge, further aggravated by another who tries to make them lose, but the confidence of their partner allows their team to continue their winning streak. Meanwhile, one who has become tired of a partner ends up making a shocking move that hurts both of them, throwing them from leading to last place in a non-elimination round.

The teams must fly via Cessna to the Arctic Circle to find their next challenge. While the Surfer Dudes are excited about being in the lead, the Haters play the blame game with one another, over their placement in the previous episode. Meanwhile, Carrie deals with Devin entering the next stage of heartbreak, depression. The first plane lands in the Arctic Circle, where the teams must now compete in a Botch or Watch, which involves finding rings in the snow and tossing them to the narwhals. If a team manages to get one of the rings onto the horn of the narwhal, they can move onto the next challenge.

Stephanie gets agitated after Ryan fails to ring the narwhal on his first try. He, however, makes up for this by ringing one on his second go. Geoff struggles to find a ring, which prompts Brody to give him a few words of encouragement. As the former attempts the ring toss, the other teams arrive and begin their search. The first of this group to finish are the Goths, due to one of the narwhals coming in close proximity to Ennui. Elsewhere on the snowy tundra, the Ice Dancers taunt Geoff after seeing his performance in the challenge. By doing this, they manage to demotivate him. Meanwhile, the Haters arrive at the location of their next tip. Stephanie suggests that they wait for the next team so that they can use the boomerang, this being their last opportunity to do so. Ryan disagrees, which causes the two to bicker. During their argument, the Goths arrive unnoticed and take the lead. The next challenge is an All-In which involves extracting blocks of snow from the ground and assembling an igloo with them. To pass this leg, the teams must get the approval of a local.

Stephanie gets fed up with Ryan and uses the boomerang on him, much to his shock. Don arrives and confirms that there is no rule against a team boomeranging themselves. He allows it and informs Stephanie that she will have to do the Botch or Watch this time. She confidently accepts this condition. The Ice Dancers' plan to sabotage the Surfers backfires as Geoff and Brody share an emotional moment, during which the former unintentionally rings a narwhal. The Haters pass the Ice Dancers on their way back, which causes Josee to become impressed with the Goths (as she assumes that they are the ones that used the boomerang on the Daters). As the Daters and Cadets struggle to move on from the ring toss (due to Sanders and Stephanie being unable to ring a narwhal), the other teams start building their igloos. While driving a snow mobile to their next destination, Geoff promises Brody that he will take them back up to first place. This optimism is, however, short-lived as a baby seal that he ringed appears in front of them, causing him to swerve and drive off a ledge. As the Goths have trouble handling the delicate snow, Ennui suggests that they pile it up and hollow it out. Once the Surfers arrive, the Ice Dancers see another opportunity to play mind games with them. Josee tricks Geoff into believing that Brody is upset with him due to the snowmobile incident. He attempts to make up for lost time by placing the blocks of snow at a quickened pace. This makes the structure unstable and results in their igloo falling apart, much to his dismay. Elsewhere, MacArthur celebrates Sanders ringing a narwhal. Unfortunately, her jumping causes the ice the Police Cadets are standing on to break away, leaving them stranded in the water. Devin offers an alliance to the Goths, which surprises Carrie. To her relief, they decline due to a dislike for Carrie's quirky and optimistic personality.

The Surfers console one another about their performance and assemble the igloo with a more relaxed state of mind. This angers the Ice Dancers, as it is the complete opposite of what they intended. After numerous tries, Stephanie finally manages to ring a narwhal and takes a snowmobile to the next challenge, leaving Ryan to run after her. While stuck on the ice, MacArthur tries to convince Sanders that they have to swim in the sub-zero temperature waters and urges her to go first. It does not come to this, however, as a narwhal begins pushing them forward. The Ice Dancers and Surfer Dudes get the approval of the eskimo and race to the finish. The Surfers are the first team to reach the Chill Zone, causing Brody to cry tears of happiness. He brings his best friend and Don in for a hug, which the host tries to break away from. They reveal that they now know of the Ice Dancers' tactics, but vow to play the game fairly. Don announces that the Ice Dancers have come in second and tells them that they should be happy with their performance. Josee channels her anger (over losing to the Surfers) into destroying the host's snowman. This causes Don to despair. As more teams finish assembling their igloos and check in at the Chill Zone, the race is on between the Cadets and Daters. MacArthur is confident that their ability to work as a team will give the Cadets the upper hand in the challenge. To speed things up, Don allows the teams to drive snowmobiles to the Chill Zone. Both teams crash into a wall of snow and end up in a giant snowball. The Cadets are the first to escape from it and secure seventh place. This puts the Daters in last place but Don reveals that it is a non-elimination round, much to their relief. The two reconcile but this peace between them does not last long, as Ryan storms off in anger before the camera cuts.

Don tells that the boomerang is back.

Don introducing the location of the next challenge...

... which is the Arctic Circle, home to several fictional characters.

Brody gets a Travel Tip.

Stephanie finds the Boomerang on her Travel Tip.

Ryan finds a ring in the snow.

The Surfers find an Eskimo underneath the snow.

Ryan manages to complete the challenge.

Geoff throws a ring which chokes the baby seal.

Ennui wonders if they should hang out more with the Best Friends.

...helps him ring a narwhal.

Everyone is surprised about Ennui's relationship with animals.

The teams throwing rings at narwals.

The Goths overtake the Haters while they are distracted.

...so both of them are forced to go back.

Kitty and Emma building the igloo.

Noah carves a heart out of ice.

Jacques and Josee advance to the next challenge.

The Surfer Dudes hug, and Geoff throws the ring away...

The Surfers almost run over the baby seal.

The baby seal attacks Geoff for what he's done.

The Haters and the Cadets are the last ones to ring toss.

Sanders looks for a ring.

Stephanie fails with her shot.

The Ice Dancers working on their igloo.

The Surfer Dudes work on their igloo...

... that Geoff ends up destroying.

While celebrating, the Cadets find themselves on a slice of ice.

Devin offers the Goths an alliance, that they'll decline.

A narwhal pushes the Cadets.

The Surfer Dudes are the first ones to finish.

Brody hugs Geoff and Don after the latter announces their victory.

The Goths make a skull of snow.

Don is despaired by Chilly's demise.

Don screams at the sky, Wrath of Khan style.

The Sisters finish the challenge.

More teams make it to the chill zone.

The Police Cadets moving a block of ice.

Ryan and Stephanie working on the challenge.

The Eskimo man gives a flower to the Eskimo woman...

...which made the Eskimo woman respond with a kiss.