View this page for her Total Drama Presents: The Ridonculous Race counterpart.

Valentina "MacArthur" Escobar is a supporting character in Total DramaRama who takes up different jobs in every episode she appears in.

Like her original counterpart, MacArthur is a loud and brash woman who takes her job seriously. Depending on the episode, she is either fond of the kids or find them annoying.

MacArthur first appears in Duck Duck Juice as an employee at a juice shop. She appears to be tired of serving the Rainbow Pegasus Juice Mix to customers, as the juice machine makes a mess each time a drink is served. MacArthur begs Duncan and Courtney not to order the juice; however, unfortunately it is exactly what they wanted. Reluctantly, MacArthur makes the juice and serves it to them, declaring that she hates her life moments after they leave.

In Cluckwork Orange, MacArthur is now the zookeeper at a mobile petting zoo. During a visit to the daycare, she first demonstrates to the kids on how to milk a bear before letting them play with the animals. She also warns them about the chicken she has, as it is highly aggressive. Once it is time to leave, MacArthur orders the animals to return to the truck. She then hands them hand sanitizer to clean themselves before driving off. Unbeknownst to her, two animals are left behind; the chicken and an alligator.

In The Date, MacArthur appears as a pizza delivery woman, sending pizzas to the daycare when Chef receives gifts from his secret admirer.

In Cone in 60 Seconds, MacArthur is now an ice cream truck driver. She parks her truck at the daycare and departs at 2 o'clock for her next destination at the park. Owen spends an entire day making two dollars in order to buy a chocolate ice cream cone from her. By the time he is about to pay for the cone, MacArthur leaves after noticing that it is 2 o'clock. On the way to the park, she gets held up by what appears to be a traffic accident. While waiting for the traffic to clear, she is chased by the kids but she manages to escape from them. As she is about to reach the park, a cat on a skateboard is appears and slashes one of her her tires as it passes by. The kids finally catch up to her and she reluctantly gives Owen the ice cream cone before driving away with a flat tire.

In Not Without My Fudgy Lumps, MacArthur also appears as a chiropractor.

Later in There Are No Hoppy Endings, MacArthur, as a delivery woman, delivers the mittens to Chef when he realized it was snowing on Easter.

In The Price of Advice, she works as a construction worker. 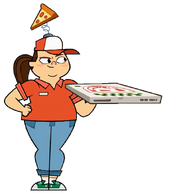 MacArthur as a pizza deliverer. 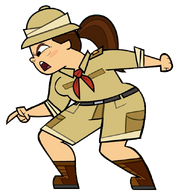 MacArthur as a zookeeper.

MacArthur working as a barista.

MacArthur teaches the kids how to "milk" a bear.

Beth climbs into the aligator's mouth..

..before MacArthur pulls her out.

MacArthur gets into a traffic.

MacArthur when she sees a mother and her baby right in front of her.

Owen goes to MacArthur and asks her to give him ice cream.

.. and drags him into his office.

MacArthur tries to fix Chef's back.

MacArthur's reaction when she sees the soldier.

"But they're not taking me down without a fight!"
- MacArthur

MacArthur gets out of Chef's office.

MacArthur is dissapointed that she didn't get invited to Chef's mitten party, in her first “confessional” in Total DramaRama

Chef refuses to stop the bus next to MacArthur.

MacArthur tries to sell a dog to Beth and Harold.

A caveman tries to hit MacArthur and another construction worker.

MacArthur wants all of the teachers in the world to be one of their robots.

Beth and Gwen make MacArthur look like a zombie.
Retrieved from "https://totaldrama.fandom.com/wiki/MacArthur_(Total_DramaRama)?oldid=1634052"
Community content is available under CC-BY-SA unless otherwise noted.