Bruce Dow
Maximillian "Max" was a contestant on Total Drama: Pahkitew Island as a member of the Pimâpotew Kinosewak. In This Is The Pits!, he was switched to the Wâneyihtam Maskwak.

Max is obsessed with being the most diabolical mind Total Drama has ever seen. He is constantly boasting about being the personification of the word "evil", claiming that there should be a new word for how evil he is, despite not being able to think of one. Despite his claims, he is actually a very incompetent, pathetic excuse of a villain, and usually causes more trouble for himself then he does for others. Although he has the ability to construct various technological devices, he cannot successfully pull off any of his schemes without Scarlett’s assistance. His knowledge outside of his inventions is not much better, though. He speaks to inanimate objects or animals numerous times, and actually expects a response. He is bent on world domination; so much so that using Total Drama as a step towards it was his whole purpose of auditioning. Max himself has admitted that he has not spent his life being social, which is why he devotes so much time to being evil. Meeting other people and getting out of his laboratory-like bedroom was another goal of joining. Despite his desire to be a villain, Max sometimes behaved as a nice boy, as mentioned in his audition tape and seen in Three Zones and A Baby, Max has a soft spot for children.

The moment Max debuts in So, Uh This Is My Team?, he quickly attempts to establish himself as an evil threat, claiming that a stick of gum that Sky offers him will not save her from his pure evil. He then gets annoyed, since the gum is cinnamon flavored. He yells at the cinnamon, saying it does not need to be so spicy. However, throughout this episode and the rest of the season, he shows that he is not as evil as he appears. For example, in this episode, he accepts the gum in a polite manner and, when he tries to find a cave to utilize as an evil lair, he believes that the cave was too spooky for him, especially when bats emerge from it.

During his stay on the island, Max often finds himself allied with his teammate Scarlett, who is far more competent than him when it comes to evil, albeit much more secretive about it. Despite Scarlett coming up with, or at least fixing, all of the schemes that he attempts to do, Max always ends up taking full credit for it. The first time this happens is during I Love You, Grease Pig!, albeit without the knowledge of Max, when Scarlett connects a lose wire in his “helmet of evil,” which allowed it to work to its full intentions during his section of the challenge. Twinning Isn't Everything is the first episode where the two work together, as Max is unsure what to do with several of the gadgets he has stashed under a rock to help himself succeed in the challenge. While his original plan is to make attach everything together in order to form a long stick that pop’s the other team’s balloons, Scarlett instead suggests a more practical approach of blowing sharp objects from a tube in order to pop the other team’s balloons from a distance. Taking credit for this idea, Max proceeds to pop Sky’s balloon, but both are taken out of the challenge later on due to Shawn’s makeshift slingshot. Max uses another one of Scarlett's ideas in A Blast from the Past, which is putting an electrical rod on his jousting stick while Scarlett throws an electric eel at it in order for the stick to act as a conductor. He uses this combination in order to electrocute Ella, making her fail at getting her jousting stick to the other side. After this event and the previous ones, Max "allows" Scarlett to become his sidekick.

While Max doesn't realize it, Scarlett is very upset about being called Max's sidekick and tries to get him eliminated in Mo Monkey Mo Problems. After Max complains about not getting any respect from Topher or Jasmine, shortly after being given a wedgie by the latter, he is encouraged by Scarlett to express his "true evil" to them by building a trap and keeping them there until they give him respect. Little to his knowledge, however, Scarlett plans for him to be the only one not caught in his own trap so that his other teammates would know it was his trap and then he could get eliminated that night. After the entire team gets caught in the trap, Scarlett is not sure that the plan will work, but Max foolishly admits that he is the one who built it. While Max receives the most votes that night, Ella is disqualified due to singing against Chris's orders, meaning Max is safe from elimination.

Max continues to be a nuisance towards Scarlett throughout This Is The Pits!. After being separated from the rest of the team, Scarlett attempts to ditch him by convincing Max to make a crocodile that confronted him his evil minion only for the reptile to bite him. Whe the crocodile is revealed to be robotic when a stalactite crushes it, Max pesters Scarlett to suck the “crocodile venom,” out of his behind. Max and Scarlett end up escaping the cave by using an elevator found using Scarlett's device, but Max throws it out of the door, much to her dismay. The significant amount of time they spend together makes Chris believe the two are in a relationship, causing Max to switch teams with Sky. On his new team, which he only spends one episode on, he gets along well enough with most of them, particularly Sugar who finds the way he talks about evil hilarious. This episode also shows his soft side towards babies that was hinted at in his audition tape, to the point where he does not want to give up his baby at the end of the challenge, until he is forced to do so. While he tries to conduct an evil scheme against his former team in the form of throwing pepper at them, he is startled by Sugar, causing him to start sneeze uncontrollably and ultimately accomplish nothing.

Max and Scarlett work together again when the teams merge in Hurl and Go Seek. After Max declares that he wants to take a break, he hits his head on a tree that ends up revealing that the island is controlled by a machine. While Scarlett tries to analyze this, Max continues to be of little use to her and eventually vomits on the exposed computer board, which ends up setting up the events up the next episode. The two of them find the control room before anyone else due to Chris giving Scarlett the map and, after Max short circuits the door to the control room, Max gets confused when Scarlett claims that the island is hers. After Scarlett reveals her true nature to Max and tells him that she was evil the whole time, Max is shown to be very afraid, even sucking his thumb, in a fetal position, in the confessional. After Scuba Bear chases him into the room where the other four contestants were, the five of them are able to trick Scarlett into opening the door, with Max holding a promo-bot to make it seem like Chris was there with the money. After Scarlett is disqualified, Max then calls her a shabby sidekick and clams he is the only true evil left on the island. Unfortunately for him, however, Chris states that he is done with evil, causing him to also get disqualified and blasted out of the Cannon of Shame with Scarlett.

Max is mentioned by Shawn in Lies, Cries and One Big Prize when he lists the contestants that would be helpful in the finale challenge.

View this page for his Total DramaRama counterpart.

Max, in his room, says how being on Total Drama is a good first step to taking over the world, along with meeting new people since he doesn't get out much. He warns the producers that he is more evil than anything the show has ever seen, and that there should be a new word to describe how evil he is. He comments how he hasn't had time to create this new word because of his babysitting job and French Horn lessons. 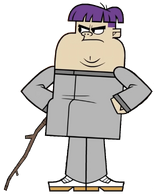 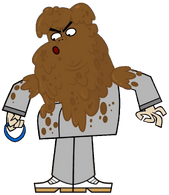 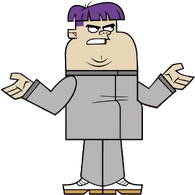 Max facing the viewer in disgust. 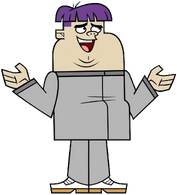 Max disapproves of a situation. 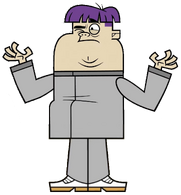 Max on the ground. 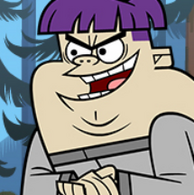 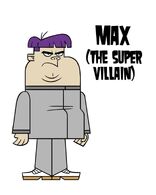 Max presents Scarlett his evil invention in the opening theme...

Max is stuck in a tree.

Max ordering Scarlett as she drags him along.

Max runs from a horde of moose.

Max is unsuccessful in finding a lair.

"Evil does not high-five."

Scarlett tries to cheer Max up.

Scarlett and Max get hit.

Max has a diabolical scheme in A Blast from the Past.

Max realizes the monkeys weren't throwing mud at him.

Max's team look angrily at him.

Max setting fire to his own bed.

Max demands Scarlett suck the poison out of his behind.

Max and Scarlett find an elevator.

Max grabs Scarlett's machine, before tossing it away.

Max is caught trying to keep a baby.

Max complains about having "tummy wonkies" in Hurl and Go Seek.

Max demands an explanation from Chris.

Max and Scarlett searching for a way in.

Max compliments Scarlett on "not being useless."

Max kicks a rock and orders it to open...

Max gets electrocuted by the panel.

Max cringes in fear after meeting an actual evil genius.

Max sucks his thumb after being intimidated by Scarlett.

Max gets reunited with the other four.

Max brags that he is the only evil left on the island...

...and gets himself disqualified by an annoyed Chris.

Max is eliminated together with Scarlett.

Max's cameo in Lies, Cries and One Big Prize.