The monster is an animatronic robot that is manually controlled by the fictional staff of Total Drama Action. Its first appearance was in Monster Cash, where it was being controlled by Chef.

In Monster Cash, Chris claims that the reason the film lot was abandoned is due to the monster going out of control. The monster is featured in the challenge, where it tries to capture all of the cast members and put them in a bounce house near the trailers. The monster is later revealed to be controlled by Chef, via a VR suit. The monster's face isn't seen until the very end of the episode when it leans down in front of Duncan and Owen. It is able to capture everyone but Owen, who is too heavy for the monster to pick up, and causes it resulting in to break down from the weight. Izzy claims to have gone on a "romantic date" with the monster after it caught everyone. The "date" presumably takes place at night, as Izzy had disappeared when Owen heads towards the bounce house full of contestants. However, she says, "I am so over that monster!" when it crushes the girls' trailer that they earn.

The monster returns again in The Princess Pride. This time, it is dressed as a dragon for the second part of the challenge. Justin, Duncan, and Harold are tasked with rescuing Princess Courtney from a tower, which is guarded by said "dragon". It is once again controlled by Chef. Justin manages to shut it down with some assistance from Harold, although it is functional again later on.

In Mutiny on the Soundstage, Duncan has to kiss the monster to pass the challenge. The monster is not controlled by Chef, but instead by a blond intern. Duncan succeeds in this challenge. 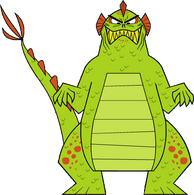 A front view of the monster. 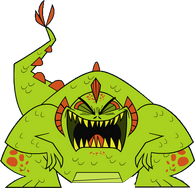 The monster about to grab Izzy.

The monster prepares to drop Izzy into the bounce house.

The monster captures Bridgette and Geoff.

The monster captures Leshawna and Harold.

Justin charms the Monster when it captures him.

The monster captures Lindsay and Heather.

Beth, Gwen, DJ, and Trent are captured by the Monster.

Owen is too heavy for the Monster.

An intern controlling the monster in Mutiny on the Soundstage.

Duncan kisses the monster.
Retrieved from "https://totaldrama.fandom.com/wiki/Monster?oldid=1576815"
Community content is available under CC-BY-SA unless otherwise noted.