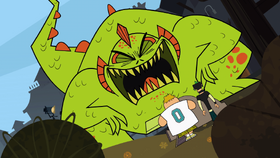 First pick of the cast trailers

Owen
After ending in a fourteen-way tie for the million dollars, fourteen castmates are brought to the set of an abandoned film lot. Their first challenge has them avoiding a monster that prowls the film lot. The winner of the challenge gets the first pick of the trailers that the castmates will be living in for the remainder of the season.

The episode opens by showing the castmates who qualified for season two — Owen, Gwen, Heather, Duncan, Leshawna, Geoff, DJ, Lindsay, Bridgette, Trent, Harold, Beth, Izzy (who only answers to her new name, E-Scope), and Justin — being dropped off by a bus to the set of Total Drama Action, after ending in a fourteen-way-tie for the million dollar prize Chris offered in the previous episode.

While waiting for Chris, the castmates talk with each other, and praise Beth for getting her braces off, saying that she looks more attractive. Chris arrives in a tram to give them a tour of the set, noting that the new confessional will be in a makeup trailer, which excites the girls.

After explaining that, in this season, castmates who are voted off will go down the Walk of Shame into the Lame-o-sine. They pass by the award ceremony theater, where Chris says that a gilded Chris represents safety.

As they explore the set further, Chris reveals that the place was once a set for a monster movie, until the star had some "problems." Lindsay assumes the star was an actress, but everyone quickly finds out it was a mechanical monster. Gwen asks what happened to it.

With Chef controlling the monster with a motion-sensitive suit, Chris explains that the first challenge is to race to a set of trailers before the monster can catch them. Everyone, except DJ (who faints upon seeing the monster), races off the cart and hurries toward the trailers with the monster in hot pursuit. DJ sits in the ground in fetal position, and Izzy is instantly captured by the monster.

Gwen asks Trent how are they supposed to find the actors' trailers, and Justin runs by saying that they should follow good-looking people, to which Beth does. When Duncan runs into Bridgette and Geoff kissing, he says he does not think that's the kind of "action" that Chris is referring to.

Then, Bridgette and Geoff proceed to make out in the confessional together. Meanwhile, Justin is still running when the monster catches him, but Justin's looks seem to captivate Chef, who's controlling the monster, and admits to Chris that the "kid's hot."

One by one, each castmate is captured, and deposited into a bounce house by the monster, eventually leaving Owen as the last person standing. When Chef finally finds him, and attempts to pick him up, Owen's weight makes the monster malfunction, since he's too heavy to pick up.

Ten hours later, an exhausted Owen finds the other castmates and releases them from the bounce house by puncturing it with a sharp needle he had found.

With everyone now freed, the castmates move on to the second part of the challenge. After entering the new dining area, they are delighted to see a feast set out on the tables. Chris divides the teams into boys versus girls, but before he can explain what the objective is, Owen erupts into a feeding frenzy, thinking the food is for an eating contest. After Owen eats everything, citing how the food was a little dry, an amused Chris reveals that the food is made from plastic, foam-core, sawdust, and silicone, and that the actual challenge was to find the key hidden inside the food, with the winner getting to choose the trailer that they, and the rest of their gender, get to sleep in. Owen burps up the key, and wins the challenge for the boys, eventually requesting medical attention from the side effects of eating fake food, after initially refusing it.

As the castmates make their way to the trailers, one trailer is accidentally crushed by the monster, who is bringing E-Scope back from their date. When asked to choose which trailer the guys get, Owen, much to everyone's surprise, chooses the recently crushed one, claiming "it has more character." The girls cheer happily while the guys get mad at Owen, until Chef crushes the other trailer as well.

After the trailers are repaired by Chef, the castmates make decisions on who to bunk with. The boys decide with relative ease, with Duncan sharing a bunk with Justin, Harold sharing a bunk with Geoff, and Trent and Owen sharing one, leaving DJ alone. The girls run into an issue in deciding bunk placement, since no one wants to share a bunk bed with Heather, so they draw makeup brushes (due to a lack of straws) to see who will bunk with whom. Lindsay and Beth share a bunk, Gwen and Bridgette share, and Leshawna and Izzy share a bunk, leaving Heather happily with a bunk to herself, an unintentional outcome due to the girls' mathematical error. Early the next morning, Chris yells into a megaphone to wake the castmates up, just to mess with them, before letting them go back to sleep, reminding them of their required early morning wakeup. After Chris signs off the episode, the monster roars in the distance, and Chris demands the monster be deactivated.

Chris shows the abandoned film lot to the competitors.

Gwen and Trent choking on the Lame-o-sine fumes.

Bridgette and Geoff making-out during the tour ride.

Lindsay is the first contestant to use the new confessional.

Chris tries to talk about the craft services tent, but hears a noise coming from the inside...

...which turns out to be Chef, as he runs out chasing a raccoon.

Lindsay takes a picture of Chef Hatchet trying to kill a raccoon.

The contestants ride by the space movie set.

Izzy, Duncan and Bridgette after hearing the monster's scream.

Some of the contestants look at the damage caused by the monster.

DJ faints when he learns the challenge involves a monster.

Harold knocks out Trent with a karate chop.

DJ sucks his thumb when he thinks about his mom.

The monster prepares to drop Izzy into the bounce house.

Inside the bounce house.

Izzy gets dropped into the bounce house and actually enjoys it.

Gwen doesn't think that the challenge is that hard...

...until the bear appears after a house suddenly burns down.

"I don't think this is the kind of action Chris had in mind."

"I thought the bear was tranquilized and returned to its handler."
"Had one day left on its contract."
"Nice!"

Bridgette and Geoff making out in the confessional...

...and ended up getting captured.

Geoff and Bridgette are captured by the monster.

Bridgette and Geoff getting dropped into the bounce house.

Harold and Leshawna are blown away by the monster

Leshawna and Harold getting dropped into the moon bounce.

The monster falls in love with Justin.

Justin is deposited into the moon bounce.

Everybody is impressed by Justin's good looks.

Heather runs from the monster.

Lindsay waving to Beth after her and Heather been captured.

Heather inside the moon bounce.

The contestants looking up at the Monster.

Beth, DJ, Trent and Gwen getting dropped into the moon bounce.

Duncan with a scared Owen.

Owen gets cornered by the monster in the middle of the city set...

...but he is so heavy, that he breaks the monster.

One of the trailers after being smashed by the monster.

Duncan's reaction to Owen's eating of the fake props.

Owen is feeling avuncular in the confessional make-up room.

The guys cheer after Owen wins the challenge for them.

The girls are jealous of Owen's reward.

The girls come up with an idea of how to decide which of them will have to share a bunk with Heather.

Heather is happy to have two beds for herself.