Mutiny on the Soundstage

Mutiny on the Soundstage 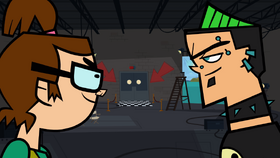 None / two-way tie
Season two comes to a close as the final two compete in a pirate-themed challenge. However, total chaos breaks loose as two hosts start a fight that threatens their friendship. The final two are pushed through a treasure hunt of knowledge and endure all of the elimination challenges in addition to one more, due to a choice. As the two finalists race to the end, something unexpected happens.

The episode opens with Beth and Duncan alone in their separate trailers. At first, Beth is excited about being the last remaining girl left on the show. However, she soon becomes scared when she realizes that she is all alone in the trailer, wishing anyone, even Heather, was there with her to keep her company. She starts to chatter her teeth, which annoys Duncan, who can hear it from the other cabin. He then also realizes that no one is in his cabin after making a joke about Beth's face. The two are soon knocked out by knock-out gas cans that were thrown into their trailers, and are then kidnapped. They awaken to find themselves tied "tightly, but not painfully" to the mast of a boat, and they decide to help each other get out of the bind, after Duncan makes a quip about how Chef is losing his touch. Beth tries to ally herself with Duncan, but Duncan doesn't believe her nice-girl façade.

Chef arrives and brings the finalists a good breakfast, rather than his normal food, much to their surprise.

While they are eating, Chris comes in and announces the challenge. He tells them that they will have to do pirate challenges, then be shot through a cannon back to the first set of the season, and since a million dollars are on the line, Chris tells Beth to reconsider the all-for-one, one-for-all approach.

They are then told that for their first pirate-themed challenge, they will have to clean the lavatories that were used by Sasquatchanakwa and the bear, using only little cotton swabs. Duncan completes the challenge first, but then must re-clean as the Sasquatchanakwa has to use the lavatory again, while Beth gets ahead. He asks her for help, but she refuses, saying "teamsies" go both ways.

However, Duncan still completes the second and third parts of the challenge first, which are to tie a flag to the top of a lubed up mast, and fire oneself from an air cannon to the monster movie set, respectively. Chef, who is finally fed up with Chris and reveals that he intends to leave the show, has taken Chris's role as host to prove that Chris has the easier job of the two. Chef follows Duncan through the challenges, asking him trivia questions pertaining to all the eliminated Total Drama Action castmates. If he answers the questions correctly, he will skip the physical portion of the challenge, and move on to the next challenge. However, Duncan doesn't know the answers to any to the questions in the entire challenge.

An emotional Chris, who is upset about Chef leaving the show, tells everything to Beth while she is pumping the air cannon. Despite not pumping the cannon enough the first time, and getting criticized by Chris after cheering him up, she manages to succeed and make it to the monster movie set. Beth is then asked questions by Chef, although unlike Duncan, she is able to answer them easily. She answers all of the questions correctly and skips over the challenges. Since Chef has to act as host to both Duncan and Beth, he runs back and forth repeatedly between the two, exhausting himself. After stalling Beth in order to rest, Chris shows up and offers to follow Beth, while Chef follows Duncan. Beth ends up catching up to Duncan, who initially had a massive lead. Eventually, the final two both end up at the set of Top Dog, and are each asked a different trivia question about Courtney.

However, both of them are unable to answer their respective questions correctly. Because the animal challenge is considered easy and harmless, Chris sends the finalists to the set of Masters of Disasters to repeat the earthquake simulator challenge instead.

At this point, Duncan and Beth start to work together, which is what Beth wanted from the beginning. Meanwhile, Chris and Chef make amends and launch a safe at Duncan. Despite Duncan pleading Beth to go on without him, Beth saves him and carries him to the zip-line. Eventually, they end up sprinting to their final objective. The camera shows the Aftermath studio, with all the former contestants watching excitedly. Geoff and Bridgette are about to announce the winner, but both Beth and Duncan cross the finish line simultaneously. This causes everyone in the room to be shocked or angry about the turn of events. The episode then ends with a black screen that states, "To Be Continued…"

Duncan begins to enjoy having the trailer to himself.

After waking up, Duncan and Beth find themselves tied to a pole on a ship.

Duncan tells the viewers where he learned to tie and untie knots.

Duncan and Beth enjoying a quality breakfast for once.

Chris congratulates Beth and Duncan for making it to the final two.

The bathrooms are used before the challenge.

Duncan and Beth's reactions to the poop deck.

Chef reveals that he is quitting the show.

Chris believes that Chef is joking around.

Chef is not amused by Chris's jokes.

…only for her to refuse.

Beth tries to climb up the mast..

..only to fall several times.

Duncan shows no sympathy for Beth and refuses to help her.

Duncan celebrates after winning the first part of the challenge.

Chef is surprised after Duncan asks about his well-being.

Chris reveals that Duncan has to fly by cannon.

Duncan reminds Chris and Chef about the finale.

Duncan flies through the air.

Beth slips off the mast.

..and falls through the ship's boardwalk.

Chef signs off the show for a commercial break.

Duncan after being shot through the cannon.

Chef tries his hand at hosting the show.

Chris gets mad at Beth.

Beth about to be launched.

Geoff and Bridgette in Chris's tanning bed during a flashback.

"The mines are buried! The blindfold's redundant. REDUNDANT!."

Duncan beats the bear in basketball.

Duncan is beaten by the bear.

Duncan and the bear play badminton.

Beth is furious Chef made her waste so much time.

Duncan has to carry Chef for not answering Justin's question right.

Beth is annoyed that she has to answer a question regarding Courtney.

Courtney is angry that Duncan doesn't get her question right.

Chris launches a toilet at the final two to hinder them in the final challenge.

Chef and Chris make up and Chef decides to stay.

Duncan is happy about Beth saving him.

Beth and Duncan on the zipline.

Duncan and Beth fall down.

Geoff and Bridgette don't know what to do with the million dollars.

Some are angry about the tie…

…while some are surprised.

Duncan and Beth are confused about the tie.