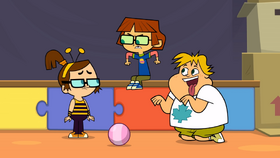 After accidentally hypnotizing Owen into being a dog, Harold thinks he must reverse the hypnosis to avoid going to jail.

Owen and Cody are playing a game of Tic-Tac-Toe. Owen is O's, and Cody is X's. After a few moves, Owen stops and thinks about where to put his next O. He thinks about it for so long, he and Cody go through their childhood, their teen years, and their old age until eventually Cody dies amd Owen marks two O's, lining up three in a way. Owen wins.

Duncan asks Harold where has he been all morning.

Harold tells the kids that he was at the dentist.

Leshawna thinks Harold should've gotten rid of all of his teeth, because that way, the tooth fairy would've given him lots of money.

Izzy tells Leshawna that the tooth fairy doesn't pay unless the tooth falls out of its own.

Izzy remembers the time she was at the court with the tooth fairy.

The judge tells Izzy that she's not getting any money.

The kids don't understand what Harold is saying.

Harold gets rid of the gauze in his mouth.

Cody mistakes Harold's gauze with a marshmallow and eats it.

Duncan wants Harold to prove that he can hypnotize people.

Leshawna wonders when is the show going to start.

Beth tells Chef that Harold is going to hypnotize Duncan.

Harold hits himself with the yoyo.

"Let's get this failure over with!"
- Duncan

Harold turns Duncan into a chicken.

Beth tells Harold to make Duncan be a dog.

Harold turns Duncan into a dog.

Duncan reveals that he was just pretending to be hypnotized all along.

Beth tells Harold that he shouldn't give up and keep trying.

Harold now thinks that if he will keep trying, he will be great.

Beth and Harold go outside to play.

Leshawna makes a snowman out of sand.

Owen gets distracted by a butterfly.

Leshawna wonders who buried her in the sand.

Beth notices that Owen is acting like a dog.

Beth tells Harold that he did hypnotize someone.

Duncan tells Harold that he will be in a lot of trouble if he doesn't un-hypnotize Owen.

Harold thinks he will go to jail if he doesn't un-hypnotize Owen.

Beth and Harold notice that Owen got out of the daycare.

Jude tells Beth and Harold that he let Owen out of the daycare because he thinks it's wrong to keep a wild animal locked up.

Harold tells Jude that the dog he let out was Owen.

Owen starts chasing after a cat.

Owen hides from a pack of cats.

The dog's reaction after he smells Owen's butt.

Owen gets taken away by a dog catcher.

Beth and Harold notice Owen being taken away by a dog catcher.

Two dogs start talking about Owen and why he's there with them.

Owen gets covered in dog food.

Owen after eating all of the dog food.

Beth and Harold tell MacArthur that Owen isn't a dog at all..

.. but MacArthur doesn't believe them.

MacArthur gets Beth and Harold out of the pound.

Beth and Harold come up with a plan as to how they can get Owen out of the pound.

Beth and Harold dress up as a married couple to fool MacArthur.

Beth tells MacArthur that she needs a dog to save her marriage with Harold.

MacArthur shows a dog to Beth and Harold.

Beth asks MacArthur if she has any dogs with blonde fur.

MacArthur shows a dog with blonde fur to the kids.

Harold tells MacArthur that they want a bigger dog.

MacArthur shows a bigger dog to the kids.

MacArthur then shows a dog with clothes on to the kids.

MacArthur then shows a dog that wears the exact same shirt that Owen does to the kids.

Harold tells MacArthur that they want a dog that looks more confused.

MacArthur shows a dolphin to the kids.

Beth and Harold start playing with Owen after they managed to get him out of the pound.

A pirate is angry at the kids because Owen took his pegleg.

Beth and Harold take Owen back to the daycare.

Harold tells Beth that she got the easier job to do.

Harold wonders how come Owen is no longer acting like a dog.

Owen reveals that he was just pretending to be a dog all along..

Beth tells Harold that he hypnotized Chef into being a chicken.

Retrieved from "https://totaldrama.fandom.com/wiki/Mutt_Ado_About_Owen?oldid=1608043"
Community content is available under CC-BY-SA unless otherwise noted.