My Way or Zimbabwe

My Way or Zimbabwe 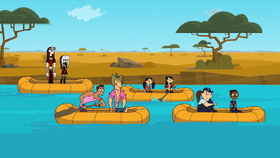 The teams head down to Zimbabwe for a photography showdown involving waterfall-diving, wildlife contact, and selfies. However, one team needs to run an errand to resolve an issue. A couple persists with their aggressive attitude to each other, while a parent gets separated from their child, with both teams having to fend for themselves.

The teams must depart from the Helsinki airport and fly to Zimbabwe. Once the teams arrive, they must drive a jeep to Victoria Falls, where the Zambezi River borders Zambia and Zimbabwe. At the airport, Junior is annoyed at his father for treating him like he is a child, even though he's thirteen years old. The Ice Dancers book a flight to Hawaii to return the Hawaiian lava rock and break their curse, while the other teams fly to Zimbabwe.

Even though Dwayne and his son are excited about getting the chance to visit Africa, Junior gets frustrated after his father refuses to let him enjoy the moment. Meanwhile, MacArthur tries taunting the Daters, which causes the Daters to start bickering and drive off-road, but they manage to take a shortcut and arrive at the Don Box, second only to the Rockers. The teams must now compete in an All-In challenge, which involves them getting into a raft and using a waterproof camera to take a selfie as they ride down the falls. If they miss the shot, they must climb back up to try again.

Once the teams take their selfies, they must race to the Zambezi National Park, where one of the team members must take a picture of the other with a white rhino. After completing both of these tasks, they must then race to the next Chill Zone. While some of the teams get started on the challenge, the Ice Dancers arrive in Hawaii so they can dispose of the lava rock and rid themselves of the curse. They perform a ceremonial ritual to please the Hawaiian gods and are satisfied when they get a sign in the form of the volcano spluttering. As teams take their selfies and regroup at the river down below, Dwayne becomes nervous after he's unable to find Junior. However, he begins climbing back up the falls after revealing that the family rule is to regroup at the last place they saw each other if they get separated. Unbeknownst to Dwayne, Junior is heading to the next challenge, after claiming the family rule is to go to your destination if the group gets separated.

MacArthur treats the rhino in a degrading manner, which angers it and causes it to chase after her. However, MacArthur manages to outrun it causing it to collapse from exhaustion, giving Sanders the chance to snap a picture. Meanwhile, Junior ends up tagging along with the Best Friends and tries to impress Carrie, his crush, along the way. On the Ice Dancers' way to the first challenge, they see Dwayne on the road looking for his son. Dwayne asks them if they've seen Junior, to which Josee quickly answers that she hasn't, before honking for him to get out of the way. Dwayne then utters a statement that they take great offense to, prompting Josee to try to run him over, but he leaps away. The Police Cadets and Surfer Dudes are the first ones to complete the challenge and race to the Chill Zone, getting first and second place respectively. Meanwhile, the Best Friends and Junior team up as they help each other get pictures with the rhino. They soon reach the Chill Zone, but Junior has to wait for his dad to arrive before he can check in since both team members must be accounted for.

As more teams check in, the race is on between the Ice Dancers and Dwayne, who ends up getting tailed by a rhino. Jacques and Josee manage to complete both tasks with ease and run to the Chill Zone, but they get run over and later chased by a rhino after Jacques insults it. Dwayne gets thrown onto the Chill Zone by the rhino, where he reunites with his son. Jacques and Josee are then the last to arrive at the Chill Zone. They get ready to give an emotional goodbye just before Don tells them that it's a non-elimination round. They then reveal in the interview confessional that now their luck has turned around, nothing is going to stand in their way and manically say that the others teams are going down. The two of them laugh maniacally as Don signs off the episode.

Dwayne pats Junior head after the later gets a paper cut.

Junior is frustrated at his dad for treating him like a child.

Carrie and Devin on their jeep.

Junior tries to show his dad he has chest hair.

The Daters try to move past the Cadets.

The Daters nearly crash with the Rockers.

Don fixing up his hair, preparing to take a selfie.

Don about to demonstrate the challenge.

Rock calms down Spud before falling from the waterfall.

Dwayne puts a life jacket on his son.

Stephanie hits Ryan with an oar.

The Ice Dancers tell the pilot to hurry.

One of the Stepbrothers' many selfies.

Sanders wants MacArthur to help her.

MacArthur refuses to help and dances instead.

Rock finds Spud in the river.

Junior believes his dad has finally caught up to him...

...but soon realizes it was the Daters.

The Ice Dancers arrive at Zimbabwe.

Junior leaves the Daters behind.

Geoff and Brody looking for a rhino.

The Surfers' selfie with the rhino.

Sanders warns her partner about the rhino.

MacArthur ends up being chased instead.

Stephanie wants Ryan to touch the rhino, but he is afraid to.

Stephanie's selfie with the rhino.

The Cadets' selfie with the rhino.

Carrie's selfie with the rhino.

Junior's selfie with the rhino, taken by the Best Friends.

Junior asks Devin if it's alright for him to ask Carrie out.

...and decide to actually do it when he offends them about the competition.

The Cadets and the Surfer Dudes reach the Chill Zone.

Geoff explains how he uses glue on his hat so that it doesn't fall off.

Stephanie slaps Ryan after they have their moment of relapse.

The Sisters' selfie with the rhino.

Stepbrothers' selfie with an angered rhino chasing them.

The Goths' selfie with the rhino.

Spud's selfie with the rhino.

Dwayne in the water.

Josee's selfie with the rhino.

Dwayne holds to a rhino horn.

The rhino decides to chase the Ice Dancers after they insult it.

The Ice Dancers are distraught at coming in last place.