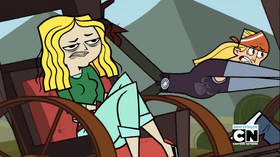 Skydive into the Bird's Nest Stadium
Eat a skewer of exotic animals cooked by your teammate
Travel to the Great Wall of China on rickshaw, and locate the Chill Zone

Travelling to Beijing, the teams must skydive and eat weird street food before trying to find the next Chill Zone somewhere on the Great Wall. While two contestants have a hard time trying to make their new alliance work, someone continues to try and work out some way to cope with her feelings for another. Quarrelling partners ultimately find victory, while someone tries to motivate their teammate, leading to utter disaster, but without either being eliminated.

The episode begins with all of the teams travelling to the Bird's Nest Stadium in Beijing, China. While the first seven teams reach Beijing and take a cab to the next Don Box, the other five are on the second flight, which is still in flight. During the flight, Carrie listens to Devin mumble things in his sleep. In an interview, she states that Devin sometimes mumbles "cute" stuff in his sleep. Devin, while sleeping, says that zebras stole his wallet. Carrie turns to the camera, and repeats her words, saying he sometimes says cute things. Rock arrives and asks Carrie if she's going to take Devin's peanuts, and inadvertently gives Carrie advice to tell Devin how she feels. In an interview, Rock states that he only wanted the bag of peanuts. Although Carrie gets emotional at the thought of not becoming together with each other, she feels better after learning that Devin had a dream about the two of them living together, despite Devin dreaming about the two of them being animals. Rock tries to talk strategy with his teammate, but this does not go as planned due to Spud's low attention span. Rock explains that their current strategy, slow and steady, is not working out. Spud says that he thought their strategy is to party hard. Spud then suggests a new strategy; party harder. An upset Rock tells Spud that they have to try harder in the next challenge. Meanwhile, after Kitty tricks her into saying it, Emma is shocked to find out that she does indeed have feelings for Noah. The first seven teams arrive at the Don Box, where they must now compete in an All-In, this time where they must find the stadium and then tandem jump into it to get their next tip. While the Ice Dancers, Reality TV Pros and Sisters get carried off course by the wind, the other teams manage to successfully land in the stadium. The next challenge is another All-In, which involves one team member skewering exotic animals which the other team member must eat after they're deep fried. The Best Friends face trouble in the challenge due to Carrie's constant barfing at the mention of 'worms'. Carrie ends up feeling nauseous. Meanwhile, the Rockers are the final team to make it out of the stadium, with Rock's strategy of bribing Spud with chocolate-covered pork rinds working.  While Ryan is enjoying the challenge much to Stephanie's chagrin, Dwayne gets poisoned by a scorpion which leads to Junior taking control of the team. After a scorpion lands on Jacques' head, Josee uses the opportunity to beat him senseless and force feeds the skewer to him, giving them the lead. The next challenge is a Botch or Watch, in which whoever didn't dive for rings in Hawaii must pull their teammate by rickshaw to the Great Wall of China which is where the next Chill Zone is. Owen says that the best way to tell a girl that you like her is to be subtle. However, instead of being subtle, he quickly tells Emma that Noah likes her and Emma replies by saying that she doesn't care. A frustrated Kitty then asks why Emma would do such a thing. It doesn't help his case when he accidentally spits the food on his skewer on her, which leads to her vomiting. Meanwhile, Ryan goes out of his way to hit every bump on the road while driving the rickshaw, which makes Stephanie puke. Ryan says that the path he chose is similar to their relationship; cracked and bumpy. The Ice Dancers lose their lead after Josee slips on a banana peel, losing control of the rickshaw. This causes Jacques to injure his ankle again after he lands on the Great Wall. The Police Cadets and Surfer Dudes temporarily ally together, due to Brody taking a liking to MacArthur. The Ice Dancers make their way onto the Great Wall with Josee using her "good luck charm" to determine which way they'll go but ultimately fails as they go the opposite way. The Best Friends switch places in the eating challenge, with Carrie managing to eat the skewered animals with Devin's motivation. Meanwhile, the Sisters' rickshaw breaks down, so Noah and Owen offer to share their rickshaw if Emma agrees to an alliance, which she finally agrees to. The Daters have an argument over which side to travel on. Ryan refuses to listen to Stephanie and carries her to the side that he chose, which ends up getting them first place. While Noah has trouble keeping his and the Sisters' rickshaw together, Emma loves the gesture. The Ice Dancers, Police Cadets, and Surfer Dudes end up going the wrong way and race to the Chill Zone with Josee throwing a temper tantrum after she and Jacques get fourth place once again. Junior tries to use his father's obliviousness to his advantage, which helps them complete the challenge. Meanwhile, Spud suddenly consumes all of the treats from Rock, getting a sugar rush. As a result, Spud ends up pulling the rickshaw, which would've lead the Rockers to be given a penalty had they not come in last. However, much to their joy, it is a non-elimination round.

The Sisters are the first to get their tip.

Carrie believes that Rock is giving her advice about Devin...

...although he just wanted the peanuts.

Rock believes that he and Spud need a strategy...

...but Spud has other plans.

Kitty thanks the Reality TV Pros for letting her and Emma finish first in Dubai.

Some teams are reading their next Travel Tip.

Josee thinks the lava rock is going to help her and Jacques.

Josee still insists that her lava rock is good luck.

The Sisters about to jump off.

The teams jump out of the plane

...followed by the Goths on top of all of them.

The wind blows the Ice Dancers away.

The final teams arrive at the stadium.

Rock explains how his strategy to make Spud collaborate will work.

Geoff reads the next Travel Tip.

The Goths release some bats.

Crimson talks about the bats, saying that they're the most beautiful creatures.

Jacques has a bad landing.

Josee tells Jacques to hold in the pain...

The Best Friends successfully land in the Bird's Nest Stadium.

Devin freaks out after landing.

Carrie silently cheers when Devin preferred her over than Shelley for once.

Owen crashes on Noah once they land in the stadium.

Mickey gets taken down by silk worms.

Dwayne gets stung by scorpions.

A scorpion lands on Jacques's face, and Josee tries to kill it, accidentally punching him his face several times.

Spud asks Rock to give him a choco oink.

...to make him swallow the food with no complaints.

Carrie gags upon seeing what she had to cook.

Rock destroys a choco oink right in front of Spud.

Ryan chooses the route that best describes his relationship with Stephanie.

The Cadets and the Surfers team up for the challenge.

Kitty takes selfies while talking with Emma about her crush.

The Reality TV Pros offer to help the Sisters.

...and they manage to arrive in first place.

Emma is thankful for Noah's help.

Spud under the effects of a sugar rush.

The Sisters and the Reality TV Pros reach the Chill Zone together.

This time, Emma lets The Reality TV Pros reach the Chill Zone before her team.

Dwayne pulling Junior on the rickshaw.

The Ice Dancers are in fourth place again.

Don tells the Rockers that it was a non-elimination round...

...and they quickly celebrate it.

Retrieved from "https://totaldrama.fandom.com/wiki/New_Beijinging?oldid=1631104"
Community content is available under CC-BY-SA unless otherwise noted.