Noah is one of the children attending Happy Tots Daycare Centre.

Noah, like his older self, is rather sarcastic and is not afraid to tell people what he thinks about them straight to their face. Being rather intelligent for his age, Noah tends to be more level headed compared to his classmates, playing the role as their voice of reason especially to his best friend, Owen. He is more sensitive than his older self. While his older self was merely sarcastic, lazy, and irritable, this version is far more manipulative and takes a certain degree of pleasure in messing with the other kids in the daycare.

In Venthalla, while Duncan and the other kids sneak from class to enter Chef's locker, Noah is designated to stay behind to cover for them. Noah tells Chef that the other kids were playing hide-and-seek, but he couldn't find any of them. Chef agrees that Noah was terrible at the game, hurting the boy's feelings. Realizing what he did, Chef tries to comfort Noah by making a list of things Noah is good and bad at, but can only think of negative qualities. Noah gets even more upset, before Chef finally thinks up one good thing about Noah. After Chef catches Duncan he tells to make the other kids come out of hiding, to which Noah yells at them to come out, right on cue for the kids to come falling out of the ventilation shaft.

In Duck Duck Juice, Noah and Owen try to stop a hyperactive Jude who is on a sugar rush after drinking Chef's Rainbow Juice. The boys keep finding Jude's clothes on the ground, before they finally find Jude about to ride the slide naked. Jude ends up getting a nasty case of friction burn from riding the slide without any clothes on, so Noah and Owen bandage up Jude's butt and drag him wheel him back to class on a toy cart.

In Free Chili, Noah and Owen are talking to each other via walkie talkies and are almost caught by Chef for violating the "no toy from home" policy. After convincing Chef that neither of them brought any toys from home, Noah hides his walkie talkie in his pocket. Later, while using the washroom, Noah is horrified that his cubicle has no toilet paper and contacts Owen for help, not realizing that Owen's walkie talkie has been confiscated by Harold and Izzy at the time, as both believed that Owen's radio that he hid inside a chili dog is an alien. Without anyone's help, Noah is forced to use his vest to clean himself. When he is later questioned by Owen about his vest whereabouts, Noah is too embarassed to tell him.

Noah looking at something.

Noah pointing at something. 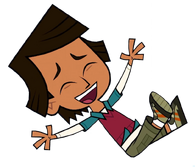 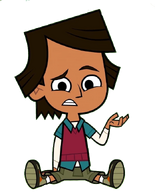 Noah becomes upset when Chef points out too many of his flaws.

Owen and Noah witness Jude burning his "buns" from sliding.

Courtney gets disgusted by Noah.

Noah notices that he's out of toilet paper and asks Owen for help.

Noah doesn't want to talk about what happened to his vest.

Noah gets 5 candy bars from Duncan.

Noah listens to what Beth says to him.

The kids licking up all the germs in the bathroom.

Noah tells Owen that if he wants to get money he needs to start his own business.

Noah tells the the kids that they need find the ice cream truck.

Noah eliminates himself from the quiet game as he thinks he will never beat Gwen.

Noah thinks the quiet game won't last long as there are only 2 people left in the game.

Noah shows the pie his mom made to his class to Owen.

Noah is thankful for Owen telling him about Chunk E. Cheddar's.

Noah decides to help out Bridgette.

Noah jumps into the pile of leaves.

"What? I'm helping her! So is it wrong if there's a little something in it for me?"
- Noah

Noah says that he was lying to Bridgette about Hiccup Island.

Noah and Gwen talk about how much they dislike concerts.

Noah and Gwen are disgusted by Bananas & Cheese's song.

Gwen and Noah are disgusted by the fact that Bananas & Cheese are Duncan's parents.

Colonel McColonelson explains to Noah what he has to do in order to finish the obstacle course.

Noah explains to Owen why he came back to the daycare.

Noah tells Owen that he left his fudgy lumps outside.

Noah tells Owen that the door is open.

Noah gets eliminated from the paintballon battle challenge.

Noah gets creeped out by Izzy.

Noah covers Gwen's mouth so she won't tell Izzy that Linty is a dead bird.

Noah tries to make Courtney correct him about how to paint correctly.

Noah tells Leshawna that they won't be making any more cookies.

Owen says that he always had a dream of owning a cookie factory with Noah.

Noah with a lot of money in his hands.

Noah tells Owen that he can take his snowsuit off now.

Noah thinks Lenny is trying to find a way out of Owen's snowsuit.

Noah tells Gwen that he will partner up with Owen for partner playtime because he's his besty.

Noah and Owen slowly walk away from Gwen.

An alien takes over Noah's body.

Noah tells Beth that him and the other kids will take care of her.

Noah and the other kids used the everything horse as a car.

Noah and Owen blame what they did on Hoppy.

Noah and Owen are sad by Hoppy getting taken away.

Noah is about to get eaten by Slimey.

Noah thinks that he will win the competition.

Noah created his own perfume for his Mother's Day card.

Noah gets hit by Lenny.

Noah gets hit by the skull on Duncan's bike.

Beth and Noah team up to get revenge on Duncan.

Cody and Noah try to sneak away from the raptor.

Noah accidentally steps on a toy.

Cody and Noah notice the raptor behind them and begin to scream.

Noah tells Owen that the stick might've been useful to turn Harold back into a human.

Noah covers himself for safety.

Noah leans down as he plays a game on his tablet.

Noah fails to catch the ball Abs threw at him.

Noah refuses to help the other kids out.

Noah tells Abs to load the bar up with weights.

Noah easily manages to catch the ball Abs threw at him.

Noah want to show Chef what Abs taught them.

Noah shows his muscles to Chef.

Noah considers the kids bathroom to be a one-way ticket to the emergency room.

Harold runs over Noah and goes into the bathroom.

Noah notices that the security system got melted down.

Noah comes up with a plan as to how he can convince the kids to help him out.

The kids decide to stay with Sewer Mike for a few more minutes.

Noah knows how to open up the cage.

Noah asks Harold what's up with his beard.
Retrieved from "https://totaldrama.fandom.com/wiki/Noah_(Total_DramaRama)?oldid=1648149"
Community content is available under CC-BY-SA unless otherwise noted.