None Down, Eighteen to Go - Part 1 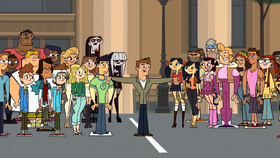 Climb 144 flights of stairs (Stairs), or take the elevator and do a skywalk around the tower (Scares)
Zipline to the airport and book a flight to the next destination

A new host introduces a spin-off series as well as the thirty six competitors, including a few familiar faces. They each arrive at a train station at their first location and are informed about their first race. One person slows down the elevator by pressing all the buttons, leaving most teams to take the stairs. Eventually, one team reaches the airport first, putting them on the first flight to the next location.

Eighteen teams compete around the world for one million dollars in the Ridonculous Race. Don first introduces the first location as Toronto, Ontario. He then introduces the competing teams shortly after. The first team to be introduced are Carrie and Devin, who have been best friends since childhood although Devin is unaware that Carrie has a secret crush on him. The next team is Mother and Daughter. In an interview, Taylor talks about how attractive she is, and Kelly is seen attempting to get along with her ungrateful daughter, Taylor. The Sisters are then introduced with Emma trying to make sure that Kitty's mind is in the game. The next team consists of "two exceptionally pale teens" named Crimson and Ennui, who remain silent as they're introduced. Also competing in the Race are Total Drama veterans, Owen and Noah, both of whom had competed in many reality shows since their last season and are known as the Reality TV Pros. The next team are identical twins, Mickey and Jay, who have been plagued with misfortune since birth. The last team to get off the bus are the Daters, Stephanie and Ryan, who have been dating for over two months.

By this point, two other teams have arrived at the train station. First are Olympian Ice Dancers, Jacques and Josee, followed by the Surfer Dudes, consisting of Brody and another Total Drama veteran, Geoff. Outside the station, Don introduces the remaining teams, the first being the Father and Son pair, Dwayne and Dwayne Jr. The next team introduced are the Police Cadets, who show up in a dramatic fashion, with MacArthur bursting through a window and Sanders climbing down a rope. The Stepbrothers, Chet and Lorenzo are then introduced, who are in the middle of a never-ending sibling fight. Tom and Jen, the Fashion Bloggers, who believe that they're "highly attractive that have impeccable taste", appear to be positive that they could win the race. The next team being introduced are the Rockers, consisting of Rock and his quiet partner Spud. The next team is the Vegans, who are "granola loving hippies" consisting of Laurie and Miles. Another team, Mary and Ellody, are introduced as the Geniuses as they reveal their reasons for participating in the race, along with their plans for the prize money. A taxi drops off the LARPers, consisting of Tammy and former Total Drama: Pahkitew Island contestant, Leonard, who believes his early elimination was due to Pahkitew Island being too challenging for him. The final team to arrive is the longtime tennis rivals, Gerry and Pete.

Don welcomes the contestants onto the twenty-six part race around the world and proceeds to explain the format of the race. At the end of each race, there will be a Chill Zone. The final pair to arrive at each Chill Zone may be cut from the competition, while the first team to reach the final Chill Zone of the race will win a million dollars. Don introduces the Don Box, which is a tip box that consists of tips to help the contestants throughout the race. The race begins at the CN Tower, with the contestants having to race on foot to find the Don Box so they can get their next tip. Father and Son are the first pair to reach the Don Box and find out that the next challenge is an "Either/Or." Don explains what an Either/Or is and requires teams to choose either climbing to the top of the tower via 144 flights of stairs or taking the elevator. If a pair chooses the elevator, teams will have to take an extra "scare" challenge, where they have to take a sky-walk around the tower. Though most teams decides to take the scare, Dwayne accidentally presses all the buttons on the elevator, forcing several other teams to take the stairs. However, the Fashion Bloggers believe that taking the elevator is still faster and end up being the first team to reach the top of the tower. However, they refuse to take the scare challenge due to refusing to wear the helmet, fearing it might ruin their fashion sense and hair.

Meanwhile in the staircase, the Surfer Dudes and Ice Dancers have no problem climbing them, but other teams begin experiencing delays; Mickey becomes delirious from the high altitude, the Stepbrothers continue to fight, and MacArthur has to carry Sanders as she is unable to continue. At ground level, the elevator finally arrives, allowing a few teams to enter. While waiting for the next elevator to arrive, Owen converses with Leonard, but gets in a awkward situation when the LARPer thinks of himself to be invisible, causing Owen to back away slowly. Once the first elevator reaches the top, Carrie and Devin are the first to take on the sky-walk, passing the Fashion Bloggers. The Best Friends face some issues due to Devin's fear of falling, though Carrie manages to calm him down. The other elevator arrives for the remaining teams, but unfortunately for them, Owen is unable to keep his bowels contained and releases a stench, disgusting everyone but Noah, who has grown accustomed by this point. The Ice Dancers finally make it to the top of the tower and are the first team to ride the zipline down to the airport, while grabbing their tip along the way. The pair easily completes this task and reaches the airport first.

During the race, Carrie is shocked to discover Devin already has a girlfriend, who was originally supposed to be his partner, but is unavailable. Meanwhile, Noah explains that he is determined to win this race, being frustrated with the numerous losses on the other shows he's competed on. While crossing the sky-walk, Noah is almost blown off the edge by the wind, but is saved by Owen, who manages to grab hold of his leg. This sudden close brush with death makes Noah retract his previous statement, realizing that the race is just as dangerous as Total Drama. Other moments include: the Cadets playfully competing with each other for the top bunk in their dormitory, Kitty continuing to test her sister's patience with her immaturity, the Tennis Rivals antiques causing them to get back at one another and fall off the zipline into the lake, and Geoff having to carry Brody after the latter suffers a leg cramp. Nonetheless, all teams end up arriving to the airport and book themselves on one of the three available flights to Morocco, where the next part of the race continues.

Don being shown on-screen for the first time.

Don introduces the show, and discovers that it is not a race to the death.

As Devin introduces himself and Carrie, Carrie stares at him lovingly.

When Devin asks Carrie why she is staring, Carrie says she was doing a lint check, for the cameras.

Taylor introduces herself as "really hot", and the best at everything.

Kelly claims that people confuse her and Taylor for sisters, which Taylor dislikes.

Kitty takes a selfie upon being introduced...

...and Emma is unhappy with Kitty's carefree behavior.

Emma wants her sister to focus on winning.

The Goths are introduced...

...and immediately scare Don upon their arrival.

Owen talks about all the reality shows he and Noah have been on.

A load of luggage falls on the Twins.

Mickey says that they are whatever is before cursed.

The Daters are introduced.

The Ice Dancers are introduced.

The Surfer Dudes are introduced.

The Police Cadets are introduced.

The Geniuses are introduced.

The LARPers arrive at the train station.

The Tennis Rivals are the last team to be introduced.

The teams are running to the Don Box.

Dwayne accidentally hits the Ice Dancers with a trash can.

Some teams reach the Don Box.

Some teams notice that somebody pushed all the buttons.

The teams wait for the elevator to come.

The Fashion Bloggers are first to reach the observation deck.

"Let's hit the skywalk and strut, all the way to the winner's circle!"
– Tom

The Fashion Bloggers are terrified of the "Scare" challenge.

Mother and Daughter fail to reach the elevator in time.

What happens when a self-proclaim wizard meets a Total Drama veteran.

A bird sits on a safety railing, causing it to fall down.

Only Noah is immune to Owen's farts.

Tom holds everyone up, by saying that he needs to make sure his helmet is disinfected...

...and Ellody glares at him.

Emma is impatient with Kitty during the "Scare."

The Fashion Bloggers hugging each other during the "Scare."

The Vegans advance on the Skywalk.

The Ice Dancers finish the "Stairs" challenge, ending up in the lead.

The Ice Dancers get the tip on the zipline.

The Police Cadets finish the stairs.

The Ice Dancers wave to their fans.

The Best Friends riding the zipline.

Gerry grabs the tip with both hands, making him let go of the zipline and falls into the lake.

Owen tries to save Noah during the challenge.

The Geniuses after completing the "Scare."

Carrie and Devin are excited to go to Morocco.

The Cadets get the tip.

The Stepbrothers zipline to the airport.

The Adversity Twins land on the Stepbrothers.

Teams on the first flight.

Teams on the second flight.

Teams on the third flight.

Don signs off the episode.

Retrieved from "https://totaldrama.fandom.com/wiki/None_Down,_Eighteen_to_Go_-_Part_1?oldid=1640804"
Community content is available under CC-BY-SA unless otherwise noted.