Not So Happy Campers - Part 1 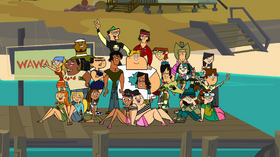 June 5, 2008
Twenty-two contestants arrive at Camp Wawanakwa, and learn that they will be spending eight weeks at a rundown summer camp to compete for a one hundred thousand dollar prize. The host divides them into two teams, introduces them to the camp cook, and shows them their first challenge.

The episode starts with Chris introducing himself as the host of Total Drama Island and greeting the audience from Camp Wawanakwa, located somewhere in Muskoka, Ontario. He tells the viewers that twenty-two campers have signed up to spend eight weeks at a summer camp, where they will participate in various challenges every three days and the winning team will receive a reward. The losing team will have to vote one of their own members off the island at the Campfire Ceremony, where campers who are safe receive marshmallows. The camper who gets voted off will take a walk down the Dock of Shame, take a ride on the Boat of Losers, and leave the island forever. The number of remaining campers will dwindle down each week, with the last one achieving cheap tabloid fame, and winning a small fortune of $100,000 (which Chris predicts will be blown in a week). He then tells the audience that any dramatic moments will be caught by cameras on the island. Chris mentions that this, as well as his fib to the contestants about having better living conditions, would make the teens unhappy when they arrived, which is seen later in the episode.

At the Dock of Shame, Chris prepares to meet the first eleven campers. Beth is the first to arrive and she immediately rushes over to Chris and hugs him. Before Chris can get a word in, she states that he looks much shorter in person. DJ arrives next and comments, with some annoyance, about how the camp looks much different than in the application form. Gwen arrives and, upon seeing the run down camp, informs Chris that she did not sign up for this. Chris smugly pulls out her contract and informs her that she did. Gwen grabs her contract from Chris and tears it up, though she becomes incensed when he pulls out more copies. Gwen angrily refuses to stay on the island, but Chris points out that unless she can swim, the boat is the only way off the island, and it has already left.

Geoff arrives next and greets Chris enthusiastically, using the word "man" several times in his conversation, much to Gwen's irritation. Lindsay arrives next, catching the attention of all of the boys, and telling Chris that he looks familiar. Heather is the next contestant to arrive, and is immediately annoyed upon being greeted by a cheerful Beth, and at the condition of the camp. Duncan arrives and immediately starts getting confrontational, but Chris warns him that he is in contact with Duncan's parole officer, and he can be returned to juvenile detention at any time if the show has any problems with him. Duncan, however, doesn't seem bothered by this. Tyler arrives on water skis, but crashes into the dock, with the resulting splash soaking an already fuming Heather.

Harold arrives carrying a keyboard, and is initially surprised with the state of the camp, but then gets excited, believing the conditions are favorable to his skills. Trent arrives next and mentions seeing Chris on a figure skating show, which Beth affirms she has also seen. He notes the run-down nature of the camp, and then notices Gwen and smiles at her, causing her to be bashful. Bridgette arrives carrying a surfboard, almost hitting the group with it multiple times before saying that she is disappointed that she won't be able to surf on the island. She quickly gets along with all the boys, and catches the eyes of Geoff. Noah arrives next and asks if Chris got the memo he sent listing a number of his life-threatening allergies and Chris awkwardly replies that he's sure someone did. Noah asks if the camp is really where they're staying, and Duncan retorts that it's his mother's house. Noah makes a snide comment about his piercings and Duncan pulls his lip, threatening to give him one, which Noah calmly declines. Leshawna arrives and talks confidently about winning, but reacts negatively to Harold commenting that she's big and loud. Katie and Sadie arrive together and are excited that they will be staying at a summer camp.

Ezekiel arrives next, and makes his lack of knowledge about modern times obvious when Chris asks him "What's up?" and he responds by indicating a bird he sees above him. Aware that Ezekiel was homeschooled, Chris gives him some advice that he should try to stay quiet and avoid getting voted off too early in the game, advice that he doesn't seem to follow. Cody arrives next and notes that the ladies have already arrived, a meager attempt to flirt, one that doesn't go well when Leshawna shushes him. Eva arrives next, plainly making her annoyance and lack of interest in her surroundings known. Owen arrives and happily shouts that he is psyched to be there, while grabbing Chris and giving him a bear hug. Courtney arrives and as Owen greets her, Justin arrives next, with everyone staring in awe at his incredibly good looks. Chris mentions to Justin that the only reason he is on the show is for his looks, which he does not seem to mind. Izzy arrives last, but trips and hits the dock face first and falls into the lake. Courtney pulls Izzy out of the water, but Izzy doesn't seem bothered by the accident at all, and starts quickly asking questions about what they will be doing at the camp. With all the contestants now present, Chris gets the campers to go to one end of the dock for a group picture. Unfortunately, the dock collapses under the campers combined weight, just as the picture is taken. Chris tells the campers to dry off and meet him at the campfire pit in ten minutes.

At the campfire pit, Chris tells the campers that the last person to be eliminated wins one hundred thousand dollars, and the first season of Total Drama. Duncan requests a bunk next to Heather, and, disgusted, she asks if the bunks are co-ed. Chris replies that each team gets one cabin, with the guys sleeping on one side and the girls sleeping on the other. Lindsay requests a cabin with a lake-view, which is promptly denied. Chris proceeds to split the campers into two teams. Gwen, Trent, Heather, Cody, Lindsay, Beth, Katie, Owen, Leshawna, Justin, and Noah form the Screaming Gophers, and Geoff, Bridgette, DJ, Tyler, Sadie, Izzy, Courtney, Ezekiel, Duncan, Eva, and Harold form the Killer Bass. Katie and Sadie vehemently object to being on separate teams, but their pleas to be united are ignored by all except Courtney, who encourages Sadie to be strong.

Chris mentions that the campers can share their thoughts in a video diary taped in the outhouse confessional. It then cuts to a disgusted Gwen in the confessional, giving her negative impression of the show thus far. In the following confessional scenes that flash by, Lindsay has trouble locating the camera, Owen lets out the first of many farts, and a Canadian Loon is shown putting lipstick on. Chris goes on to say that the Gophers are in the east cabin and the Bass are in the west cabin.

As the female Gophers unpack, Heather complains about the bunk beds being too much like a summer camp, and Gwen sarcastically reminds her that it is a summer camp, potentially being the start of their ongoing conflict later in the series. Cody then enters the girl's cabin and compliments Gwen for being so smart, to which she responds by pointing him to the boy's side and kicking him out. Chris also points to the communal bathroom for everyone to use, which confuses Lindsay who mishears it as "communion." Chris gives everyone thirty minutes to unpack before meeting him back at the main lodge.

This statement is interrupted by a sudden shriek from the Gopher girls' cabin. Inside, they find Lindsay standing on a chair, screaming fearfully about a large cockroach on the floor. The cockroach crawls towards DJ, who also shrieks and jumps onto one of the bunk beds, completely crushing it. Several campers try unsuccessfully to kill the roach, until Duncan slices it in half with an ax. Tyler tries to impresses Lindsay by bragging that he could have done the same, despite having done nothing to help.

In the main lodge, Chef introduces himself, and his food serving schedule of three meals a day, ignoring the campers' requests and complaints about the quality of his food. After breakfast, Chris then announces that the first challenge starts in one hour. DJ assures a nervous Katie that the first challenge won't be too difficult, but the camera then pans to the campers lined up on a very tall cliff, where DJ immediately changes his mind and begins to panic.

"Only one camper will be left standing at the end and they will be rewarded with "cheesy tabloid fame"...

One of the hundreds of cameras situated all over camp.

Beth's arrival is a less than pleasant one for Chris.

"Wow, you're much shorter in real life."

DJ arrives to the island.

DJ notes how the "resort" looked a lot different on the application form.

Gwen didn't sign up to be on a rundown summer camp.

Gwen rips up her contract.

Geoff is ready to party.

Lindsay is "not too shabby", but also not too smart.

Upon her arrival, Heather instantly gives everyone a malicious glare...

Upon his arrival, Tyler tries to prove he is athletic...

... and fails to impress them.

"Yes! That is so much more favorable to my skills."

"I thought we were going to be on a beach."

"Saw you on that figure skating show, nice work."

"You got my memo about my life threatening allergies?"

"Feel free to quit now, save yo'self the trouble, cause I came here to win!."

...causing Leshawna to need to get held back from attacking him.

"Oh my gosh Sadie look, it's a summer camp! Okay, I always wanted to go to summer camp, EEE!"

Chris advises Ezekiel to not say much and to try not to get kicked off too early.

"Cody, the Codester, the Codemiester!"

Eva arrives with some heavy baggage.

Owen arrives and is very happy.

According to Chris, Justin was picked based entirely on his looks.

Izzy hits her head on the dock, and...

The weight of everyone being on the dock at once causes it to collapse beneath them.

The contestants at the campfire area for the first time ever.

Duncan requests a bunk under Heather's.

Chris assigns everyone to teams.

The contestants react to their teams.

Katie and Sadie are not on the same team, disappointing the former.

Courtney supports an upset Sadie when she is separated from her best friend.

Chris shows the campers the confessional for the first time.

Lindsay screams after seeing a cockroach.

Duncan arrives with an axe...

... and chops the cockroach in half.

Chef shows from the start that he is just as unhappy to be at the camp as the campers.

Gwen is disgusted by the food.

Retrieved from "https://totaldrama.fandom.com/wiki/Not_So_Happy_Campers_-_Part_1?oldid=1651744"
Community content is available under CC-BY-SA unless otherwise noted.