Not So Happy Campers - Part 2

Not So Happy Campers - Part 2 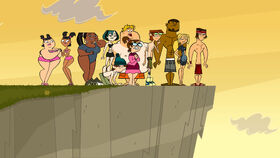 Ezekiel
The two teams begin their first challenge: jumping off a 1,000-foot cliff into a small safe zone surrounded by shark-infested waters, and building a hot tub out of wood. One team bonds quickly, while the other struggles to cooperate. After the two-part challenge, one contestant's comments anger the female contestants on his team, and therefore leading to his early elimination.

The episode continues where the last episode left off, with all of the campers assembled at the top of the cliff. Chris reveals the first challenge of the series: The campers must jump off the one thousand foot high cliff into a safe-zone in the lake, which is represented by a small ring of buoys. For every camper that completes the challenge, their team will receive a point. After every contestant is offered a chance to jump, the points are tallied, with the winning team earning an advantage in the following part of the challenge: building a hot tub. The team with the best hot tub gets to have a hot tub party that night, while the losing team must vote a camper off for the first time. Bridgette thinks the challenge is fairly straight forward, but Chris reveals that the rest of the lake is loaded with rare, freshwater, man-eating sharks.

The Killer Bass are up, but no one is eager to go first. Bridgette nervously volunteers, successfully landing in the safe zone. Spurred on by her victory, Tyler enthusiastically jumps next. Although he crashes painfully onto one of the buoys in the lake, he still lands in the safe zone. Geoff, Eva, and Duncan then successfully complete their jumps with no problem. However, DJ is afraid of heights and does not jump, and he is forced to wear a chicken hat and take the escalator down the cliff. Ezekiel and Harold complete their jumps, but they both get injured; Ezekiel hits a rock jutting out from the cliff and Harold lands on his crotch. Courtney refuses to jump, citing a medical condition. Chris warns her that not completing the challenge might cost her team the win, with a good possiblity that she would get eliminated. However, Courtney accepts the risk, believing the majority of the members on the opposite team won't jump. Sadie and Izzy are left for the Killer Bass, however, Sadie refuses to jump without Katie, as the two girls are best friends and do everything together. Both girls beg Chris to allow one of them to switch teams. Izzy offers to swap, and Chris allows it, placing Katie on the Killer Bass and Izzy on the Screaming Gophers. Katie and Sadie squeal in happiness and excitedly jump off the cliff together.

The Screaming Gophers are up next, and Chris offers them an incentive: if they can beat the Killer Bass' score, he'll give them pull-carts to carry the crates holding the hot tub parts. However, like the Bass, no one is motivated to go first. Heather refuses to jump, stating that she does not want to get her hair wet on national television. Lindsay chimes in, supporting Heather's decision and refusing to jump as well. Leshawna intervenes, arguing with Heather about not jumping and refusing to lose the first challenge because of her. The two throw insults at each other until Leshawna throws Heather off the cliff, and she falls into the safe zone. Leshawna jumps after her, followed by Lindsay, Gwen, Cody, Izzy, and Justin. Justin lands outside of the safe area, to the concern of the other campers, but his looks charm the sharks and they carry him to shore. Beth does not jump because she is afraid, but Trent and Noah (unseen) successfully jump.

After most of the team has jumped, Owen is the only one left, but Trent gives him words of encouragement.

The Gophers are nervous, but Owen manages to overcome his fear and jump off the cliff. When he falls, he makes a tremendous splash, knocking Trent and Noah, still in the water, to the beach. While winning the pull-cart advantage for his team to carry the crates, he loses his bathing suit in the water, much to everyone's disgust.

The Gophers, with their pull-carts, happily sing as they walk back to the campsite, while the Bass have difficulty moving the crates. Katie and Sadie take a bathroom break and Courtney gets a bug bite on her eye, which causes it to swell. When Katie and Sadie return from relieving themselves, they begin feeling itchy, which Bridgette surmises came from the poison ivy they squatted in. The itching becomes so unbearable that Katie and Sadie can't do anything to help. Meanwhile, the Gophers' hot tub is coming along, having already made it back to camp. Heather approaches Leshawna and apologizes for her rudeness earlier. Leshawna is moved by the apology, and agrees to have a truce with her. In private, Heather admits to Lindsay that her apology wasn't the least bit sincere. When Lindsay asks why she faked being nice to Leshawna, Heather reminds her of the old adage "keep your friends close and your enemies closer." Lindsay asks if Heather considers her a friend, and Heather assures her that she is, for now.

The Killer Bass are behind in building their hot tub and two players down, since Katie and Sadie are still tending to their rashes. Geoff and Courtney attempt to rally their team to win the challenge, but ultimately they are unsuccessful. Duncan criticizes Courtney's high-handed nature, claiming her bossiness and assumption of other's weaknesses make her an ineffective leader, which Courtney takes offense to. The Gophers build a fully functional hot tub, while the Bass assemble a badly-constructed one that leaks and collapses in on itself, costing them the first challenge.

At dinner, the Bass try to decide who they are going to vote out. Duncan says that it should be Courtney or DJ, the two who did not jump. His vote leans toward Courtney, since he considers DJ's strength to be a possible future advantage. Courtney is shocked by Duncan's choice, arguing that her experience as a C.I.T. (Counselor-in-Training) makes her valuable, and tries to shift attention towards Tyler instead of herself, which Lindsay blatantly objects to. Duncan and Geoff, however, aren't interested in voting off Tyler, since Tyler jumped. Ezekiel wonders why their team lost, since the Gophers had more girls on their team. When Eva and Bridgette question what he means, Ezekiel explains that guys are stronger and better at sports than girls, which especially angers the two of them, the most athletic girls on either team. Geoff attempts to calm everyone down, but Ezekiel continues his sexist comments about intelligence, which angers every girl on the Killer Bass.

At the campfire ceremony, Chris, with a plate of marshmallows in hand, explains that they will be given out to all campers who are safe. The one camper who does not receive a marshmallow is eliminated and must leave. Chris gives marshmallows to Geoff, Tyler, Katie, Bridgette, DJ, Harold, Sadie, Duncan, and Eva (not shown). The bottom two comes down to Courtney and Ezekiel, who start to panic. Chris finally gives the remaining marshmallow to Courtney, leaving Ezekiel as the first camper voted out of the competition. Chris suspects that Ezekiel was eliminated for picking his nose, which was caught on camera, rather than his derogatory comments towards the female campers.

Back at camp, the Gophers are seen enjoying their hot tub party as the Bass walk by, with Cody toasting to the Screaming Gophers. Courtney signals for the cameraman to come closer, and declares that the Gophers can enjoy their first victory, but she will ultimately win the competition and $100,000 prize, and no one will can get in her way.

After jumping off the cliff, contestants must assemble a hot tub.

Killer Bass are reluctant to jump off the cliff . . .

Chef feels something brush up against his leg . . .

The sharks in the challenge.

Bridgette takes the first jump off the cliff.

Bridgette lands in the safe zone.

After seeing Bridgette make the jump, Tyler is eager to jump.

He makes it, though he doesn't quite land where he should have.

Duncan jumps with no response.

DJ is the first chicken.

Ezekiel enthusiastically jumps off the cliff . . .

Harold has no problem jumping . . .

. . . but the sharks' reactions to his landing says everything.

Courtney risks elimination by not jumping.

Chris tallies the Killer Bass' results, stating that 8 jumped and 2 chickened out.

Izzy gladly switches teams so Katie and Sadie can be reunited.

Katie and Sadie jump together.

Leshawna and Gwen's reaction to the reason why Heather doesn't want to jump.

Lindsay sides with Heather when the latter doesn't want to jump off the cliff.

Gwen, Owen, and Beth watch as Leshawna and Heather argue.

Cody and Noah's reactions to the argument.

Justin admires himself in a mirror amidst of the argument.

Heather and Leshawna's conflict starts when Heather says she refuses to jump off the cliff.

Leshawna throws Heather off the cliff.

Heather falls into the water.

Leshawna joins Heather in the water.

At first, it appears Justin may be in danger. . .

Beth apologizes to her teammates for being a chicken.

Leshawna and Cody taunt Beth after she refuses to jump off the cliff.

Trent has no problem jumping.

Owen is the last person that has to jump.

The Screaming Gophers cheer for Owen to jump.

Owen gets ready to jump off the cliff.

Geoff doubts Owen has any chances of surviving if he jumps.

Gwen has little confidence in Owen.

. . . along with the Screaming Gophers.

Trent and Noah look up as Owen falls towards them.

The splash that Owen's jump had caused.

A shark is seen clinging to a tree after Owen's jump.

Owen makes it in the safe zone.

However, he loses his bathing suit in the water.

The aftermath of Owen's jump.

Lindsay and Beth are happy Owen landed in the safe zone.

Lindsay and Noah taking the crates back to camp.

Katie and Sadie follow Tyler to go "to the toilet."

Izzy suffers a rope-burn on her tongue after opening a crate with her teeth.

Bridgette wonders what happened to the girls.

Bridgette tells Katie and Sadie that they squatted on poison ivy..

..which makes them freak out.

Courtney assures Leshawna her bee sting is "just an allergy" (a nod to Election).

Owen has got the wood for his team.

Courtney tries to rally the Killer Bass together.

Courtney elects herself as the "leader" of her team.

The Bass struggle to cooperate. . .

. . . while the Gophers all work together in the first challenge.

Harold continues to suffer from misfortune.

The seagull in the Killer Bass' hot tub.

Some of the Screaming Gophers celebrate their victory.

All of the twenty-two campers eating dinner in the main lodge after the challenge.

Duncan believes DJ is a better teammate than Courtney.

Lindsay quickly protests when Courtney suggests that they vote off Tyler.

Geoff stands up for Ezekiel.

"Dude, you've got a lot to learn about the real world."

. . . receiving the first marshmallow ever.

"Woo-hoo-hoo! Yeah! Place at the table!"

—Tyler, getting his marshmallow

Harold, happy as he gets a marshmallow.

Courtney and Ezekiel are featured as the first bottom two.

Courtney receiving the final marshmallow in the first Campfire Ceremony.

Ezekiel is the first person to be eliminated from Total Drama Island.

Ezekiel walks down the Dock of Shame . . .

The Gophers enjoy their hot tub party at night.

Some of the Gophers dance and sing.