Not Without My Fudgy Lumps 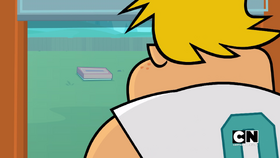 One of the kids left their snack outside. The others must now find a way to help their friend to retrieve their precious snack before it is eaten by critters. Meanwhile, the teacher is receiving a very painful massage.

Izzy is playing a card matching game on her tablet with each card representing a character from the show. Each time she gets it wrong, the character will either frown or appear to be shocked. When she is correct, the character either cheers or smiles before their cards disappear.

The kids get inside the daycare.

Noah explains to Owen what a chiropractor is.

.. and drags him into his office.

Owen starts panicking because he can't find his fudgy lumps.

Noah explains to Bridgette why Owen likes fudgy lumps so much.

Noah tells Bridgette that they have to find Owen's fudgy lumps as fast as possible.

MacArthur asks Chef how did he hurt his back.

.. and how he injured himself.

...what he did in the morning.

Noah tells Owen that he left his fudgy lumps outside.

Owen tries to get outside.

Owen is unable to open the door.

Duncan thinks there's nothing worse than watching an amateur trying to get out of the daycare.

Owen tries his best to open the door...

Izzy tries to get Chef to open the door for Owen.

Chef while MacArthur is trying to fix his back.

"What happened to two and three?"
- Chef

Chef screams "no" which makes Izzy think Chef's not in his office.

Owen wants Duncan to help him get out of the daycare.

Duncan tells Owen that he will only help him out of he gives some of his fudgy lumps to him.

.. eating from his box of fudgy lumps.

A montage of Owen getting attacked...

Owen sees a snake and wants him to stop the squirrel from eating his fudgy lumps.

Owen decides to share his fudgy lumps with anyone who helps him get outside.

Duncan tells his plan to the kids.

Duncan gives a helmet to Harold...

The kids try their best to get outside the daycare.

Bridgette tells the kids that she sees light.

The snake and the squirrel are almost finished with eating all of Owen's fudgy lumps.

Owen tells the kids that they need a new plan.

Izzy has an idea as to how they can get Owen's fudgy lumps back.

Izzy tells her plan to the kids.

Bridgette tells Chef what they're looking at.

Chef wants to help out the kids...

...which makes them very happy.

MacArthur drags Chef back into his office.

Owen thinks he will never get to eat fudgy lumps again.

Izzy tells the kids that she bought a military drone.

The kids' reaction when they hear that Izzy bought a military drone.

.. a drone coming to the daycare.

The squirrel sees the drone...

The military notices that one of their drones has been hacked.

The military thinks it was Norbert that hacked one of their drones.

The military goes to the daycare.

Izzy tries to pick up Owen's box of fudgy lumps.

"Now she knows what other left means?"
- Noah

The military gets into the daycare.

One of the soldiers gets into Chef's office.

MacArthur's reaction when she sees the soldier.

"But they're not taking me down without a fight!"
- MacArthur

MacArthur gets out of Chef's office.

Noah tells Owen that the door is now open.

.. and then destroys it.

Izzy gives Chef his phone back.

Owen tells the kids that he has another box of fudgy lumps in his lunch.

"I should have seen that coming."
- Noah

Owen is happy that the kids tried to help him out.

Owen gets attacked by squirrels again.

Retrieved from "https://totaldrama.fandom.com/wiki/Not_Without_My_Fudgy_Lumps?oldid=1603235"
Community content is available under CC-BY-SA unless otherwise noted.