Owen is one of the children attending the daycare center.

Much like his teenage self, Owen is excitable, friendly, often happy, a little dim and has an extreme love of food. Being a child, he is arguably quite gullible, often falling for Duncan's tricks and willingly participating in his plans. Owen also has a very strong bond with his best friend Noah.

In Venthalla, Owen wins an uber ball and shows it to his friends. Duncan urges him to play with it, to which Owen gives in, leading to the ball to rebound around the room causing destruction. It comes to the attention of Chef who confiscates it due to the 'no toys' rule at the daycare. Upset he lost the toy, Duncan then proposes the kids break into the safe where Chef is keeping all of the kids' toys. Navigating through the vents, the kids take back all their toys, except for Duncan who actually used this as a ploy to escape the daycare. Without Duncan and the map, the kids get lost in the vents, until Owen's sense of smell picks up the scent of food and is able to guide everyone back. Just as Noah, who had stayed behind to over for everyone, ran out of excuses, Owen and all the kids fall from the broken vent back into the classroom. Owen's uber ball plummets from the vent and now with an even greater elastic strength rebounds so hard it completely reduces the daycare to rubble.

In Free Chili, Owen and Noah are talking via walkie-talkies and have to hide them when Chef nearly spotted them. For Owen, he hides his inside his lunch box. Owen's radio picked up a Spanish radio station advertising burritos. This causes Jude and Harold to believe that Owen's chili dog with the radio in it is an alien from outer space. Without his lunch, Owen begins to lose his mind. Even after eating four of his classmates lunches is not enough to satisfy his appetite. He eventually finds out where his chili dog is but it was crushed by several vehicles, devastating Owen.

Owen looking at something. 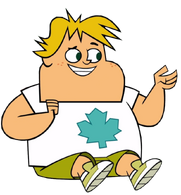 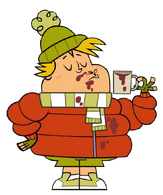 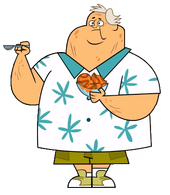 Jude and Owen sing a song about Pizza.

An ant takes over Owen's brain.

MacArthur tells Owen that if he gets 2 bucks by 2 PM she will sell him an ice cream.

Owen thanks Noah for helping him out.

Owen gets a time out.

Owen and Duncan play with each other after Chef gave Owen a time out again.

Owen feels bad about what he has done to his friends.

Owen tries to get a worm from a bird.

Owen thinks Santa Claus will come to the daycare.

Noah explains to Owen why he came back to the daycare.

Owen starts panicking because he can't find his fudgy lumps.

Owen gets attacked by squirrels.

Owen thanks Izzy for helping him out.

Owen teams up with Courtney in the paintballon battle challenge.

Owen searches for Courtney's couch in his chips bag.

Owen's reaction after he sees a hot dog that was inside Beth's nose.

Owen gets his money back.

"Compost? I thought that was a snack bucket!"
- Owen

Owen as he watches the fireworks in Know it All.

Owen says that he always had a dream of owning a cookie factory with Noah.

Owen struggles not to tell the truth about his and Noah's cookies.

Owen tries to calculate how many badges does Courtney still need to earn.

Owen wins the "Sniff It Till You Barf" game.

Owen's reaction when Courtney tells him that he, Harold and Jude can help her.

Owen gets bitten by a bat in the newest video that he and Jude created.

Owen makes a video about the Tammy Tinkles doll.

Owen thinks that when there's fire, people should roast marshmallows on it.

Courtney "saves" Owen after she hears him saying "fire red".

Owen shows his new snowsuit to the kids.

All of Owen's other snowsuits were hand me downs from his cousin but her family moved to Florida.

The kids tell Chef that they're covered in paint thanks to Owen.

The kids are angry at Owen for opening the window.

Courtney kicks Owen out of the daycare.

Owen plays poker with a penguin.

Owen protects the kids from the giant snowball.

Noah and Owen slowly walk away from Gwen.

Owen gets scared by Leshawna.

Owen tells Leshawna that it can't be him who got gum in her hair as his gum is still in his mouth.

Owen poses for the camera.

An alien takes over Owen's body.

Owen's reaction when he sees Courtney with cupcakes in her hands.

Owen eats pudding without a spoon.

Owen is excited because it's story time.

Cody and Owen as they listen to Gwen's story.

Owen blames what he did on Hoppy.

Owen and Duncan as they eat whipped cream.

Owen becomes angry at Slimey for eating all of the ice cream.

Owen is very impressed by Izzy.

Owen, Beth and Duncan find a map that leads to Bigfoot's treasure.

Owen falls into the lava, but survives.

Owen is happy that they didn't die.

Owen pretends to be a dog.

Owen after eating all of the dog food.

Owen flies into the space.

Owen imagines himself having fun with Lenny.

Owen finds out that Lenny ordered pizza with Chef's phone.

Owen tells Lenny that he will go back into his cage.

Owen after shaving his head bald.

Owen catches all of the food Beth throws out of the fridge.

Owen tries to make Cody fall off the swing.

Owen gets his hands glued to the Chef statue.

Owen is thankful to the gloves for helping him out.

Owen asks the gloves which one of them gives a better high five.

Maude gives Owen a time out.

Owen wonders who is going to make them lunch now.

Owen ate all of the food Chef stored in case of a zombie apocalypse.

Owen farts in the face of a zombie.

Owen tells everyone that he's training to be a paleontologist.

Owen tells Izzy why he pretended to be a dinosaur for her.

Owen gets shot with eggs.