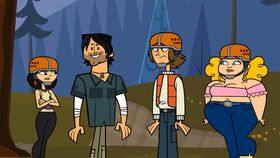 Compete in challenges created by the contestants

Proceeding to the finale

Sugar
The final three get to make their own challenges which the host decides to use with his own adjustments. After a hurdle race and a tree-hopping course leads to a three-way tie, it comes down to a talent show in which the contestants reveal some rather bizarre abilities. A conflict between two competitors reaches its boiling point, however, it is the one who should be in their element with the challenge that reveals how talentless they really are, getting them removed and reducing the competition to the final two.

At the treehouse, while Sky is still sleeping, she is startled by the appearance of a shadowed figure attempting to hit her with a club and screams. Suddenly, the figure disappears and Sky presumed that she was just dreaming before going back to bed. In reality, Sugar is hiding in the bunk above her, with the club still in her hand, admitting in the confessional that she wouldn't club her (on national television). In her own confessional, Sky is excited to be in the final three and believes that she might be able to defeat the other two competitors, with Sugar being the only threat due to her actions in the previous episode, and vows to defeat her without cheating. Meanwhile, Shawn is still depressed with his girlfriend's elimination, but is now relieved that he can keep the prize money all for himself to build his zombie-proof bunker. Soon, Chris announces that the challenge will begin soon and Sky quickly runs to the meeting place. En route, Sugar cryptically reveals to her about the incident this morning to which Sky immediately realizes that she wasn't dreaming at all. As the two girls begin quarreling on how they play the game, Sugar pushes Sky into a bush, stating that her niceness would be the cause of her eventual defeat.

Once the final three arrive, Chris announces that each of the three finalists will create their own challenges, forming a three-round challenge overall. The first challenge is created by Sky; a one-hundred meter hurdle race, with traps added by Chris. In the confessional, Sky states that she came in second place at the hurdles event back home, and the girl who came in first isn't here. The players start the race and Sky takes an early lead, successfully jumping over the hurdles until she falls into a hole. Shawn on the other hand, isn't as successful and keeps getting hurt by the traps, but after Sky falls into a hole he overtakes her. Meanwhile, Sugar, does not jump over any hurdles and instead drags them along in front of her, mistakenly believing she had to collect them. Eventually, Sky makes a desperate sprint and successfully reach the finish line before Shawn and wins her own challenge, with Shawn in second and Sugar in last. Sugar protests that she should be the winner, as she collected the most hurdles, however, Chris retorts by saying nobody cared, as it "wasn't a scavenger hunt".

The second challenge is created by Shawn. His original idea of a scavenger hunt for hidden government documents about the existence of a zombie virus is rejected, so Chris chose his second idea; reaching the finish line by jumping from tree to tree without touching the ground. Shawn and Sky both perform exceptionally well, although (as Sky had suspected), Shawn is slightly more skilled at tree-hopping, and earns the lead. However, Shawn runs into bad luck when he encounters a monkey wielding a chainsaw, and starts cutting the branch he's holding onto. As a result, Shawn hits the ground and must start over. Meanwhile, Sugar climbs to the top of the first tree, believing that there is something up there that might help her to reach the finish line. Once the she reaches the top, the tree starts to wobble as a result of her weight. Eventually, she is launched all the way to the finish line, knocking out Sky in the process. But before Sky can start over, Shawn reaches the finish line first, putting him in second place again while Sky places in last. With the points now tied, Chris announces the final challenge, created by Sugar; a talent show. While Sugar is confident she'll make it to the finals, Sky and Shawn are nervous as they didn't have much talents other than their respective specialty.

An hour later, the contestants gather at the stage with their performance being judged by Chris himself, an intern and the rebuilt Scuba Bear. The talent show begins with Chef singing a song as an introduction. The first contestant to perform is Sky as "The Belching Sheriff". Her performance involves her belching loud enough to break the bandit's cardboard standees. While Scuba Bear and the intern give her nine points, Chris only gives her a 6.5 due to the color used for the cardboard standees being cliche. Shawn is next to perform and plays what he called an "Armpit Serenade", which he claims is his first time doing it in public. The symphonic piece he performed is good enough to impress all the judges who give him nine points each, and with that, Shawn is guaranteed a spot in the finale. Sugar is the last person and under her "Sugar Silo" alias, she performs a combination of Rap and Country music, which she refers to as "Craptry". However, her performance is so terrible to the point that the camera lens breaks, a squirrel loses its fur, sharks leave the island, an intern runs away, and Scuba Bear is destroyed again. Chris is appalled by this and gives Sugar the lowest score, thereby eliminating her.

That night, Sugar, in the Cannon of Shame, protests that the judging was tampered with and that she should be the winner, claiming that the winner should be based on their "general awesomeness", but Chris ignores her complains and activates the cannon. As Sugar flies off, she yells "I'm coming, wizard!". With twelve contestants eliminated, Chris announces that Shawn and Sky are the final two of the season.

Sky wakes up from her rest...

...only to see Sugar preparing to club her...

...but Sugar gets out of the way in time for Sky to think it was only a dream.

Shawn shows a blueprint of the bunker of his dreams.

Sugar claims that she never loses when it counts.

Sugar pushes Sky into a bush.

The final three listen to the challenge.

Shawn believes that Sugar has an advantage in a zombie apocalypse.

Shawn and Sky glare at each other before the challenge.

Shawn also gets hit in the groin...

Shawn and Sugar do badly the challenge.

Sky falls into a pit.

Shawn makes fun of Sky as he sprints passed.

Sugar finds a hive and eats the honey.

Shawn and Sky skillfully maneuver across the trees.

While Sugar slowly climbs to the top of the tree.

A monkey appears on one of the branches with a chainsaw.

The monkey falls towards Shawn...

...and knocks them both to the ground, meaning Shawn has to start over.

...and when it is thrown off, it is revealed to be robotic.

Sugar gets flung off the tree, directly into Sky's branch.

Shawn also finishes the challenge before Sky gets the chance to start over.

Sky cues Chef that she is ready to perform.

Sky's score after performing her talent.

Sky and Sugar glare at each other angrily.

Chris is moved by Shawn's talent.

Shawn's score, being higher than Sky's, secures his spot in the finals. 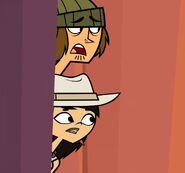 The sharks are scared away by Sugar's singing.

Retrieved from "https://totaldrama.fandom.com/wiki/Pahk%27d_With_Talent?oldid=1629299"
Community content is available under CC-BY-SA unless otherwise noted.