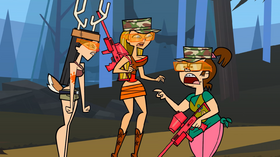 Cody
The two teams compete in a paintball competition, with members of each team divided into "hunters" and "deer." One member of an alliance stands up against the Queen Bee leader, which causes her team to lose. Additionally, one camper is voted off after being viciously mauled by a bear.

The episode opens with the campers being rudely awakened from their sleep by the sound of Chris flying over the camp in a helicopter. In the girls' cabin, Heather asks Beth and Lindsay to warm up a shower for her, to which they reluctantly comply.

Since Heather is still getting her shower, a long line of girls can be seen outside the communal washroom a short time later. Gwen decides to go "lumberjack style" due to the long wait and walks into the forest to do so.

Chris is heard over the loudspeakers shortly after, telling the campers to gather at the campfire pit. Heather then requests that her back be lotioned. When Beth turns around, she discovers that the other girls have left the scene, leaving her to complete the difficult task alone. At the campfire pit, Chris informs them that the day's challenge is about survival, and that the teams will go on a paintball deer hunt; he then reveals an arsenal of paintball guns. Chris states that the hunters for the Killer Bass will be Harold, Geoff, and Bridgette, who will be using blue paintballs; for the Screaming Gophers, the hunters are Owen, Beth, Leshawna, and Lindsay, who will be using orange paintballs. Everyone else will be dressed as "deer," with antler headgear and deer tails, and will be the "hunters' prey." Duncan is very disappointed in being a deer, and Owen decides to target him, calling him "Bambi."

Out in the woods, the members of the Screaming Gophers who were selected as "deer" are unhappy about their roles, except for Cody.

Heather declares that she will have Beth and Lindsay defend her in the game, dismissing Gwen's suggestion that this would be illegal. The scene moves to the Killer Bass' hunters, where Harold attempts to reassure Bridgette, who believes hunting is incorrect, by pointing out that Heather is one of the deer, which significantly enhances Bridgette's perspective on the matter.

Just after Chris announces the hunt has started, Owen splashes urine from a jar on himself to mask his scent, which repulses the other hunters on his team. Beth and Lindsay are snarled at by Heather, who orders Lindsay to get her berries and Beth to get a bag of chips from the dining hall.

Owen continues his search through the woods and comes across DJ, on whom he makes an attempt to creep up. Beth, on the other hand, sneaks into the main lodge, past Chef's watchful gaze, to get the chips Heather requested. Back with Owen, the hunter is suddenly startled by a snake and DJ, alerted to his presence, runs off, being followed by Owen. Back at the main lodge, Beth barely manages to get out with the bag of chips without being seen by Chef.

Owen maintains his chase of DJ, but only succeeds in hurting himself in the process. After risking her life for a bag of chips, Beth speaks with Cody and tells him she's had it with the game. Heather is mad that Beth ate the majority of the chips and tells Beth to go get her some, but Beth declines. Moments later, Heather is shot by Harold and Bridgette. Owen climbs the cliff, shooting at DJ, but when they reach the top, Owen is out of paintballs, causing DJ to angrily hurl Owen over the edge.

Elsewhere, Heather calls an alliance meeting with Lindsay and interrupts Beth shooting at a "deer" to tell her she can stay in the alliance if she apologizes for her earlier actions, but Beth refuses. The two argue back and forth with Beth stating that Heather is more concerned with bossing people around than winning challenges. At another location, Owen, soaking wet, is determined to get a deer and spotting Duncan walking by, quickly finds a new target. The fighting between Heather and Beth continues on with Leshawna overhearing the argument and stopping to watch. Leshawna accidentally shoots Heather by mistake, and when Heather turns to angrily berate Leshawna, Beth shoots Heather as well.

Meanwhile, Owen is perched high in a tree, preparing to shoot Duncan, who is drinking from a nearby pond. Duncan is alerted to his presence by Owen's loud fart, and he flees.

Heather shoots paintballs at Leshawna and Beth, who return the favor. Courtney and Duncan argue over which way the camp is situated in another area, and as a result, their "antlers" become locked.

After that, Courtney becomes enraged and asks, "Now what?" Duncan answers by asking Courtney if she wants to make out with him, to which Courtney just gives a blank look.

The paintball battle between Leshawna, Heather, and Beth is noticed by Harold, Geoff, and Bridgette. They begin shooting at them for amusement just as the hunt is announced to be over. Chris surveys the campers and informs them of Cody's bear mauling. Courtney and Duncan, still stuck together, come to the camp grounds. When Owen and Gwen both joke about the two being stuck together, Duncan responds, "The girl can't keep her antlers off me." Courtney responds violently by kicking Duncan in the groin, prompting Bridgette and Geoff to untangle them. Since the Killer Bass are coated in far less paint, Chris declares them the winners of the challenge.

At the campfire ceremony, Heather declares that, if she could, she would vote for Beth and one other camper. In the confessional, a mauled Cody is assured that he is safe because he is a fast healer and everyone despises Heather. At the campfire ceremony, Chris gives the marshmallows to Trent, Lindsay, Owen, Gwen, Leshawna and, to Heather's surprise, Beth. Heather and Cody are in the bottom two, and Heather gets the last marshmallow, claiming that her teammates are very fortunate not to have voted her off. In the end, Cody is voted off the island. Since Cody is unable to travel on his own, Chris allows someone to wheel him down to the Dock of Shame, which Beth quickly volunteers to do. The gophers bid farewell to Cody as Beth wheels him away. Upon reaching the end of the dock, Beth shows Cody the tiki idol she took from Boney Island in the previous challenge. Cody, realizing the truth about the idol and their number of losses, frantically tries to tell Beth the truth, but Beth doesn't seem to realize he's trying to tell her anything important. She then kisses Cody on the cheek before saying farewell, causing his wheelchair to roll off the Dock of Shame and into the water, almost drowning him.

Duncan flips out when he hears a helicopter above the cabins.

Heather instructs Beth and Lindsay to do her bidding.

The remaining girls wait for Heather to finish with her "private time."

Trent and Gwen are becoming even closer.

Chris shows off the gear to be used during the challenge.

Duncan and Owen talk before the challenge begins.

The Killer Bass are shocked to see DJ's animal instinct.

Heather doesn't participate in the challenge.

Lindsay and Beth walk in the forest.

Beth drops her tiki idol and is almost caught by Chef Hatchet.

DJ is chased by Owen.

Beth stops running away from Chef as she rethinks her actions.

Beth vents her feelings to Cody.

Beth finally stands up to Heather.

DJ gets angry at Owen.

The hunter is now the hunted.

Owen is thrown off the cliff by DJ.

"Wait! I have blueberries, see?"

Owen fails to get Duncan either.

Cody is mauled by a bear who obtains some of his possessions.

Cody after his mauling.

Courtney and Duncan cross paths during the hunt . . .

Bridgette, Harold, and Geoff stumble upon the fighting Gopher girls.

Courtney kicks Duncan in the groin.

. . . and Owen vote for Cody in the confessional.

Lindsay admires Beth for standing up to Heather.

Heather chews out her team once she is safe.

Cody is eliminated from the competition.

Beth kisses Cody on the cheek before he leaves.

The episode ends with Cody rolling into the water.