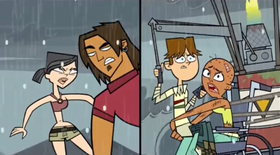 A place in the final two

Heather
With their original mode of transportation destroyed, the final three contestants (and a previously eliminated one) must engage in a full-out, no-rules race to Hawaii. While one villain confronts their nemesis about her treachery in a previous episode, another contestant develops a strong bond with someone he initially tried to avoid. Ultimately, while one contestant guarantees herself a spot in the final two, two others tie for second place and must battle for dominance in the final challenge.

The episode opens with an upset Chris pouting over the destruction of his beloved Total Drama Jumbo Jet and all of his luxurious belongings that were inside of it. This was due to Sierra accidentally blowing up the plane at the end of the previous episode. Heather and Alejandro both attempt to convince Chris to continue the show, but instead, he furiously snaps at the two, believing that the loss of his plane is more important than the show.

Meanwhile, Cody is yelling at everyone to help him save Sierra, who is buried in the wreckage of the plane as a result of the explosion in the previous episode, although everyone ignores him. Cody picks her up, and Sierra says she had dreams of this, except that he would be wearing Mountie hat and loincloth in them. Cody, thinking she is crazy, asks her if she landed in her head, but she denies this, saying she is fine, except for her left wrist, right earlobe, scalp, and both ankles, which are throbbing with every step they take.

Heather decides to help Sierra, out of sympathy for her being bald, and gives her a wheelchair and her hat from Easter Island. Cody puts her in the wheelchair, and Heather makes Sierra wear the hat. Sierra asks Cody if it looks okay, and Heather empathetically says she looks gorgeous, but then she makes disgusted gestures behind her back.

Chef finds an extremely large crate, which Chris explains is the emergency kit. Inside the kit is a two-seater helicopter, which only has enough room for Chris and Chef. Chris tells the final three that the final challenge is in Hawaii and gives each of them GPS coordinators before leaving, saying to set them to Tijuana Beach, which is located in the Mexican border. Sierra asks what's going to happen to her, but Chris refuses to help her, in part out of anger because she blew up his plane. Sierra glares at him angrily as the helicopter takes off.

The two yell at each other over the walkie-talkies until Heather turns hers off. On the plane, Cody tries to find what to use to travel to Hawaii, and Sierra makes him come up with an idea with the words "seat belt, meal tray, parachute," calling her a genius. Back outside, Alejandro finds a truck full of animals from the show and enters it, intending to ride it to his destination. Meanwhile, Heather trips on some train tracks, allowing her to follow them to a train station. A cocky Alejandro tells the camera that he is going to win but is suddenly kissed by Sasquatchanakwa, which causes him to stumble backward in shock and fall right into a crate, accidentally locking himself in it. He eventually manages to get himself out, and states that once he finds Heather, he will destroy her "as she destroyed his heart." He then discovers Ezekiel in a crate with the other animals on the truck, and agrees to let him out if he behaves and does what he tells him to do.

From his seat in the helicopter, Chris comments on the fact that Heather is in the lead, and Alejandro is closing the gap, but Cody has not even left the remains of the plane. Inspired by Sierra and the items in the debris, Cody builds a hot air balloon, but cannot find a basket to ride to continue in the challenge. Sierra offers him her chair and tells him she is willing to stay in Drumheller forever and die for him. Cody thanks her for this and calls her a good friend until she asks him to call her his "best friend." Because of his morals, he can't leave her behind so he takes her with him. Cody sits in Sierra's lap in the wheelchair while they ride the hot air balloon. They manage to set off and start moving. Soon, their hot air balloon comes into range of Chris's helicopter and they both narrowly avoid each other, much to the angry remarks of one another.

The truck Alejandro is riding is unloaded onto the train that Heather had previously boarded, which is on a non-stop trip to Mexico. Just when Heather thinks that she has the advantage, Alejandro appears in her compartment with Ezekiel, using the hood of his jacket like a leash. He tells the conductor that Ezekiel is his little brother and that his animalistic qualities are merely 'quirks'. After Alejandro notices Heather, he releases his grasp on Ezekiel, who proceeds to aggressively chase after Heather. She manages to escape from the car, but is cornered on the roof of the caboose by Alejandro. After a brief fight that results in the two of them ending up on opposite cars, he uses his belt to disconnect the car, attempting to abandon her on the tracks. However, she manages to jump over onto his car and lands on top of him. Sierra uses this moment in the hailstorm to ask Cody to kiss her because she thinks they will die. However, in the middle of the hailstorm and as he claims he is proud of his timing, Chris then uses this hectic opportunity to make the contestants sing "I'm Gonna Make It," which makes them complain. Chris dismisses this by saying that, at this point in the game, they should already be used to the unexpected singing challenge.

During the song, Heather manages to push Alejandro off the train, while Cody accidentally crashes his hot air balloon into some telephone wires, leaving Heather as the only contestant still moving southward. However, Alejandro manages to land on one of many wild horses that are traveling in a herd, galloping alongside the train. Heather then encounters Ezekiel again, and after a brief fight, she is thrown out of one of the train's windows by him and lands on another one of the horses near Alejandro, prompting both to finish the race on horseback.

Cody and Sierra try to free the balloon from the wires, but it ignites and burns up. Cody gives up on the competition after his mode of transportation is destroyed. Sierra urges him to keep going, which he ignores in a dejected tone. She goes to a nearby fireworks shop and tries to barter for fireworks, unsuccessfully. Sierra then prepares to sell her expensive locket, which features a picture of Cody inside, to get enough money to buy them. Upon learning that the fireworks are for Cody, the fireworks salesman, who reveals himself to also be a major fan of the Total Drama series and of Cody in particular, gives her a whole box full of fireworks for free. Even though Cody is still devoid of all hope, Sierra convinces him that he still has a shot to win and that he should get up and continue.

They attach the fireworks to her chair and fly towards the beach. Alejandro and Heather arrive at the same time, crashing into an embrace with each other, while Sierra and Cody crash and fly right into one of the boats and take off before the others can recover. Heather wastes no time catching up, while Alejandro comes up alongside her. Cody throws a cod at Alejandro which causes him to retaliate and engage in battle with swordfish, allowing Heather to take the lead. She arrives at a mine field and avoids the mines, taking first place where Chris and an angry peanut gallery await. Alejandro tells Cody he is going to win, but hits a mine, blowing his boat skywards. Cody passes Alejandro and cheers for his win. However, his boat runs out of gas inches away from the beach and Alejandro's boat crashes on top of Cody's boat, launching them and Sierra onto the beach. However Chris is unable to tell who landed first and declares it a tie. He tells everyone that he could look at the instant replay of the "slow motion," but intentionally drags the time on to reach the episode sign off, ending with Cody and Alejandro tying for second place.

At Mexico, Ezekiel arrives at the beach where the final three (and Sierra) had already left. He kneels down and sniffs a single feather left behind by Heather, then looks up towards the sun. He then hallucinates and witnesses the sun turning into a giant money bag with a dollar sign on it. His eyes widen and he smiles weakly before he starts walking towards the sun and deeper into the water, as he makes his way towards Hawaii.

Alejandro and Heather ask Chris if the game will be continued.

Cody and Heather help a bald and injured Sierra.

The contestants are excited to go to Hawaii.

Chris explains the challenge and gives the GPSes to the contestants.

Sierra admits that Chris is a total jerkface.

Alejandro pulls out one of the passports…

…and confronts Heather about voting for him in "Awwwwww, Drumheller."

Alejandro states that he has to keep his focus off of Heather in order to redeem himself.

Alejandro finds a truck with the animals.

Cody searches for something useful in the destroyed plane.

Alejandro taunts the other contestants about his lead in the challenge.

Alejandro, against his will, is kissed by Sasquatchanakwa.

Cody with his hot-air balloon.

Cody says he can't leave Sierra and he'll get her out of here.

"We sound just like an old married couple, don't we?"

Alejandro brings Ezekiel onto the train.

Alejandro and Heather at the top of train.

Alejandro is surprised when he sees Heather about to jump down onto him.

"The only one who's leaving is you!"

The contestants sing during "I'm Gonna Make It".

Cody and Sierra's hot-air mobile gets tangled up in telephone lines.

Sierra strolls upon a fireworks stand.

Sierra opens her locket, revealing a picture of Cody.

The firework seller realizes Sierra is talking about Cody from Total Drama.

Heather tries to prevent Ezekiel from attacking her by throwing things at him.

Cody and Sierra attach the fireworks to their wheelchair.

Alejandro and Heather racing to the finish line.

Heather and Alejandro on the beach.

Cody and Sierra take the lead.

With Cody and Alejandro busy fighting each other, Heather easily takes the lead.

Heather makes it to Hawaii first.

Alejandro's boat gets shot into the air by a mine…

…but Cody and Alejandro tie.

Ezekiel finds a feather on the beach in the exclusive clip.

Ezekiel looks at the sun.

Ezekiel hallucinates a giant money bag in the sky, before he starts heading to Hawaii.

Ezekiel walking towards the sun.