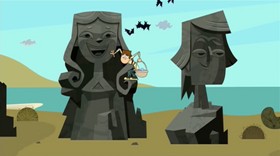 Choose someone to stay in first class with you

The final four contestants are on their way to Easter Island to compete in an egg hunt themed challenge, as two contestants maneuver to become closer to the end through manipulating others. In the end, one contestant wins the challenge, but when somebody is spared, the frustrated winner of the challenge picks another person to stay in first class, so that they may be with another.

The episode opens with Cody waking up in first class. Surprised, but very relieved that for the first time this season, he managed to spend the entire night without Sierra bothering him. Alejandro explains that she did try to enter first class seven times, but he sleeps with one eye open, which helped keep her away from Cody. Cody responds by hopping onto his lap and hugging him tightly, much to Alejandro's disdain and embarrassment. In the confessional, Alejandro explains that the real reason he brought Cody to first class with him was to gain his loyalty and to convince Cody to vote off Heather with him. Alejandro then brings out his reward from the last challenge, a whole cart of candy. After Alejandro explains that he doesn't eat sweets because they will ruin his body, he gives them to Cody in exchange for a favor. Cody excitedly agrees. Meanwhile, in economy class, Sierra asks Heather for advice about how to deal with her relationship with Cody. Heather advises her that boys come and go, but girls stay together forever, in an effort to balance Alejandro's attempted alliance with Cody. When they are about to land, Chris and Chef fight over who should fly the plane, resulting in the jet crashing into an Easter Island rock head.

On Rapa Nui, Chris explains the challenge for the contestants. Rocks have been shaped to look like the heads of past contestants who have been eliminated, with eggs hidden among them. The contestants need to get three of their specifically colored egg (based on the color of the feathered headset they are given) and go through the underground cave to reach the highest point of the mountain. Sierra starts to gush over Cody, and unlike what normally happens, Cody seemed happy to see Sierra due to all the candy he ate. Sierra is the first to find an egg, but it's Alejandro's color, so she drops it on the ground, causing it to break in order to prevent him from getting it. When Sierra does find her colored egg, she weaves a basket from grass to carry her eggs in. Sierra finds more and even helps Cody collect his. Cody thanks Sierra and admits in the confessional that if Sierra wanted to help him get the million dollars, he wouldn't stop her. Heather struggles to hold her eggs, so Sierra also weaves her a basket, stating that girls stick together. Cody uses his basket full of candy to carry his eggs, and Alejandro asks to share it since there is plenty of room. When Sierra sees this, she gets angry and claims this isn't healthy for their new family of eggs. Alejandro, however, counters this by offering more candy.

While walking through the cave, Cody and Alejandro see a giant boulder coming towards them. Cody flees into a corner, leaving Alejandro with the eggs, who promptly gets squashed by it, along with his egg. They lose one egg each thanks to this hazard and they are forced to go back. While there, they realize they are carrying condor eggs and the father is chasing them. While the girls are in the cave they agree at the next elimination to vote for Alejandro since the worst case would be a tie, and best case scenario being Alejandro voted off. One of Sierra's eggs hatches and shows a bird chick with a striking resemblance to Cody, hence it being named Cody Jr., which shows a fondness of Heather and keeps nesting on top of her head. When the boys are seen running through the cave, they realize that a giant bird is chasing them. The contestants make it out in the order of Alejandro, Cody, Sierra, and Heather. Luckily, the bird's path is blocked by a giant Chef rock.

The second part of the challenge is to climb up a huge rock pillar and return the eggs to the nest on top. To make it worse, the female condor is there now, being twice the size of the male one before. Since Alejandro made it out of the cave first, he gets a catcher's mask, protecting his eyes from the condor's talons. During Condor, Alejandro manages to put two of his three eggs into the nest, but the last one cracks on the ground. Cody is next and doesn't manage to put any of his eggs into the nest, but thanks to his basket, none of his breaks, allowing him another shot at it when the girls are done. Sierra puts one of her eggs in the nest before being distracted by Cody Jr. going to see "Auntie Heather". When Heather's turn comes up the female condor flies away with Cody Jr., allowing Heather to put all her eggs in the nest and win the challenge. But Cody Jr. flies back to Heather and the condor grabs Heather and flings her to the ground, which causes a domino effect on the eliminated contestants' rock-formed heads, resulting in them crashing into each other and collapsing.

During the Barf Bag Ceremony, Sierra gets three votes against her, Cody's reason being he saw her weave a nest out of his underwear, and that her stalking has to stop. As Sierra says goodbye, Chris reveals that it was a reward challenge, meaning Sierra is safe for the night, which angers Heather. Chris then tells her that she is able to bring someone to first class. Heather invites Alejandro, saying she will let Sierra and Cody be with each other for the night, but Heather blushes when Alejandro thanks her. Chris then signs off the episode.

Sierra records a post for her blog. During the recording, she fantasizes over Cody and films him as he sleeps in economy class.

Alejandro tries to get Cody off of him.

Cody begins to drool as Alejandro talks more about his candy and hints towards not wanting it.

Cody is extremely grateful for Alejandro keeping Sierra away from him.

Heather advises Sierra to put trust in fellow girls and take out Alejandro.

Chef Hatchet and Chris fight over who should fly the plane.

One of the statues falls down, as a result of the close landing.

Sierra's first sighting of Cody since the last challenge.

Heather saying that Cody and Sierra are so cute.

Sierra knows what Heather is up to and is only pretending to be loyal to her.

Chris is talking about the Moai of Easter Island.

Chris starts off the first challenge.

The egg belongs to Alejandro...

Lindsay's carved head is next to Ezekiel's.

Alejandro does not find any eggs in Lindsay's ear.

Cody catches one of his eggs when it falls from Duncan's carved head.

Harold's carved head, with Sierra's egg in his ear.

Sierra is able to weave herself a basket.

Heather finds one of her eggs in Courtney's carved head.

Sierra finds her egg and Cody's egg in Tyler's statue.

Sierra pinches Cody's cheek after giving him the egg she found.

Leshawna's carved head, with Heather's egg in her earring.

Heather drops her egg she retrieved from Leshawna's statue.

Heather's egg shatters on the ground.

Alejandro juggles his eggs due to not having a basket.

Sierra notices that Cody and Alejandro are sharing a basket.

This infuriates Sierra who calls for a family meeting.

...but Cody is enticed into aiding Alejandro anyway when he bribes him with candy.

Chef attempts to lift up the statue that the plane knocked down.

Alejandro and Cody hear a rumbling sound in the cave.

Heather and Sierra then see the boulder.

A boulder rolling towards Sierra and Heather...

...but they manage to dodge it.

Chef is responsible for rolling the boulders.

Alejandro gets run over by another boulder.

One of the eggs start to hatch.

"Cody. The next generation begins!"
- Cody

The egg hatches and the baby bird looks like Cody.

Cody Jr. attaches himself to Heather, believing her to be his mother. 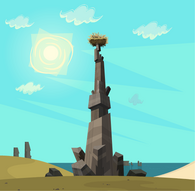 Alejandro pulls a coconut out of Owen's carved head.

The bird refuses to fly off of Heather's head.

A condor emerges in the cave.

A carved head of Chef is created...

...while the contestants warn Chef to shut the cave before the condor gets out.

Alejandro is the first to climb to the nest.

...and his last egg breaks on his face.

Cody is the next to try it.

Cody is knocked to the ground by the condor.

Cody Jr. sees Heather and flies down to her.

Heather climbs with Cody Jr. on her hair.

Meanwhile, Sierra gets thrown away by the condor.

Sierra, Cody, and Alejandro are afraid to watch Heather get attacked by the condor...

...but she ends up being fine.

Cody Jr. returns to Heather, as she watches the condor coming at her.

...which disgusts all the contestants.

Just as Chef puts up the final statue...

...which starts a domino effect that destroys all of them.

Cody is excited that Sierra was voted off...

...but finds out that it was, once again, a fake elimination.

Heather blushes at Alejandro when she chooses him to go to first class with her.

Retrieved from "https://totaldrama.fandom.com/wiki/Rapa_Phooey!?oldid=1631646"
Community content is available under CC-BY-SA unless otherwise noted.