The Rockers with Spud

Carlos Diaz
Rock was a Total Drama Presents: The Ridonculous Race contestant as a member of The Rockers with Spud.

Rock is best friends with Spud. The two are in a garage band called "Devil Frog" together, and still haven't moved out of their parents' basements. Rock is outgoing, enthusiastic, and has a habit of making sound effects while he talks. Between him and Spud, Rock is clearly the smarter of the two, and often has to provide direction and leadership for his partner.

At the age where children are supposed to leave their parents house, Rock's parents insist that he do the same and move out from the basement. Rock had the idea that if he had a million dollars, he would build his own basement. He joins the Ridonculous Race with his band mate Spud, debuting in None Down, Eighteen to Go - Part 1, and insists he will do all the work due to Spud's uselessness at anything other than playing musical instrument. For several episodes, Rock finds himself performing most of the challenges alone, while Spud simply listens to music and gets dragged around. In Bjorken Telephone, Spud has the nerve to tell Rock to do the challenge faster, leading a frustrated Rock to shove food down Spud's throat for the Either/Or. One of Spud's quirks, a delayed pain reaction, helps the Rockers out in Brazilian Pain Forest, as it allows the Rockers to acquire the Travel Tip from the oven mitt with no difficulty. Rock tries various methods to get Spud to be more active in challenges, usually to no avail.

In New Beijinging, Rock finally has an idea to get Spud more motivated, by bribing him with Choco-Oinks. However, his plan does not go as planned, due to Spud's craving increasing to the point that he devours the whole pack without Rock noticing and experiences a sugar rush. While his hyper state is helpful at first, Spud loses his energy at the last minute, leading the Rockers to be the last team to arrive at the Chill Zone. Fortunately for them, it is a non-elimination round. Seeing that his plan put more harm on Spud, Rock apologizes for ordering him around and decides to change his strategy. In I Love Ridonc & Roll, Rock is worried that Spud's recent injuries would cost them the challenge and could causes their elimination. But upon seeing the way Spud performs the Botch or Watch, Rock realizes that he should had just accept Spud the way he is. The Rockers finally break their losing streak and come in first place.

Despite their sudden change in luck, the Rockers return to being the last few placements again in the following episodes. But unlike before, Rock doesn't complain anymore and is more patient with Spud's poor reaction time. In Down and Outback, Rock injures both his legs while trying to catch a bunny, leaving him unable to walk. Though incompetent at first, Spud finally completes the challenge and the two make their way to New Zealand. However, their glider crashes into a mountain along the way and Rock is cannot continue, due to being unable to unstrap his seat belt. Spud, however, carries his partner out of the glider, but yells too loudly, causing an avalanche that carries them all the way to the Chill Zone. After Don reviews the video, he declares that the Rockers are the second last team to arrive at the Chill Zone, but are eliminated anyway due to it being the first double elimination of the Race. Though disappointed at first, Rock is proud of Spud for being more active than he was before. As the Rockers leave the Race, the Stepbrothers invite them to play video games at their home, to which they accept.

In the finale, Rock watches the final outcome of the Race and is excited to see which of the final two teams will win. However, Spud believes that they are in the finale instead and hugs Rock tightly while he tries to tell him they are not. After the winner is declared, Rock joins Don and the other contestants for the final group shot before the season ends.

Rock wondering about something.

Rock pointing at something.

Rock holding out a donut.

Rock acting out a story.

Rock during a challenge. 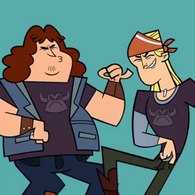 Rock and Spud are introduced.

The Rockers on the plane.

Rock and Spud waiting at the airport.

Rock tries to say the Icelandic sentence, and he gets it right.

The Rockers celebrate after their success.

Rock watches Spud getting the tip.

The Rockers run to the Chill Zone.

Spud tries to cheer Rock up.

The Rockers are in the bottom four again.

The Rockers arrive to the Chill Zone in Hawaii.

Rock claps after Twins finish the challenge in first.

All Rock wanted are Devin's peanuts.

Rock believes that he and Spud need a strategy.

The Rockers come in last...

...but celebrate as it is a non-elimination round.

The Rockers calling a taxi.

Rock tries to form an alliance with one of the teams in the taxi.

Rock says he finally realized what makes Spud so awesome.

The Daters nearly crash with the Rockers.

The Rockers in Zimbabwe.

Rock finds Spud in the river.

Rock's foot gets stuck in a rabbit hole.

The Rockers' jet crashes into a mountain.

The Stepbrothers and the Rockers make their departure after the first double elimination from the race.

Rock and Spud commentating on the finale.