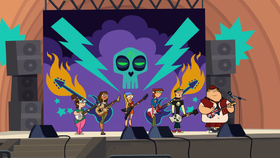 Lindsay
After a former castmate returns to the game, the final six compete in rock and roll themed challenges. One of the girls wins invincibility again, so another one plots for somebody's downfall to weaken her chances. In the end, the plotter accidentally eliminates herself, leaving another castmate sad.

The episode opens with Lindsay singing happily (albeit terribly off-key and messing up some of the lyrics) as she leaves the communal bathrooms, which causes several animals to run away due to her horrible singing voice. Her bad singing, and singing the incorrect lyrics greatly irritate Courtney, who is still upset from the events of the previous night, who shouts at Lindsay, correcting her, saying that the lyric is "butterflies", and not "butter knives", but Lindsay remains oblivious. This also irritates Duncan, who is annoyed from having to sit through the movie last night with Lindsay. Chef then begins to play the drums, prompting the castmates to emerge from their respective trailers. Chris then announces the challenge, and explains that it will be the "Rock and Roll" genre, much to Harold's excitement. Lindsay then questions why Owen is next to her, eating her popcorn. The camera moves to Owen, as Chris yells at him to leave and wait for his cue. Chris then announces that Owen will be returning to the competition due to a lawsuit where he "sued the show, and won". Owen later reveals in the confessional that he never filed a lawsuit, and that he only returned because Chris had actually paid him to come back onto the show to cause more drama, as he needs the money to pay off his mom's cheese cellar.

The castmates then move on to the first challenge, which is guitar playing. The castmates are told that they need to play the notes that correspond with the screen, and that they will be electrified if they miss a note. Harold plays too fast and his guitar starts burning, so Chef throws water on it and electrocutes him. Owen falls off the stage and is eliminated. Lindsay gets electrocuted because of not playing at all, but asking Chris if he has a red guitar that went with her outfit. Beth's guitar simply explodes, leaving Duncan and Courtney the only two left in the challenge. Duncan plays the guitar very basically, while Courtney does a tremendous amount of tricks. Duncan then smashes his guitar, and Chris says that he won, as Courtney "tried too hard". Duncan teases her about his victory, to which Courtney responds by smashing her guitar against Duncan's groin, knocking him to the ground.

They then move on to the next challenge, where they must maneuver through a red carpet. Courtney goes first, maneuvering around the photographers and fans, while rushing through the obstacles. Duncan goes next, being rude to the photographers and all of the fans, save for the groupie, to whom he gives his phone number. Owen then goes, tripping and rolling down the red carpet, causing Chef to have to duct-tape the door back together. Beth loses her glasses on her turn, and ends up tripping and falling, much like Owen, making Chef duct-tape the photographer back together too. Harold goes next and starts out okay, while getting the Rock and Roll symbol incorrect, but when Duncan tells Doris to hurry up, Harold becomes extremely upset, breaking all the cardboard cutouts, and breaking down to the point where he falls into Chris' arms, crying, leaving Chef to duct-tape all of the cardboard cutouts. Lindsay is the last to go and she walks slowly down the red carpet, greeting and posing for the fans and the photographers. Due to this, Lindsay has the best photo and also did the least amount of damage, thus winning the challenge. Courtney is angry about this, saying that she clearly did the best job of dodging the paparazzi. Chris then says that the objective wasn't to dodge the paparazzi, but rather, to properly expose yourself to them, before adding "and Lindsay exposed".

The third challenge for the castmates is to trash a hotel room. They all go at the same time, but Lindsay earns extra time at the end for winning the previous challenge. Duncan and Courtney are, once again, the best castmates in the challenge. However, Courtney ends up losing her mind, and destroys the entire set, including the lights, a microphone, and the set walls. Courtney ends up smashing so much that Lindsay has nothing left to break when she got her extra time. Because she destroyed almost everything, Courtney wins invincibility. once again.

Later, Harold and Owen are seen being called over to a set bridge by Lindsay and Beth, as Harold tells Owen how happy he is that Owen is back. They begin to talk of a plan to vote off Duncan, as Courtney has immunity. They wish to vote him off for his bad attitude, and knowing Courtney would go crazy if he left. Owen seems to disagree, saying he wants to vote for Courtney, even if that would be a waste of his vote, but says it is for getting him voted off in the first place. Harold, however, agrees with Lindsay and Beth and agrees to vote off Duncan. At the Gilded Chris Ceremony, the castmates are seen voting, with Owen notably voting for Courtney, and Harold for Duncan. Lindsay is seen looking at Beth, smiling, and closing her eyes while she voted on her voting device.

Chris then distributes the awards to Courtney, Beth, Harold, and Owen, leaving Lindsay and Duncan in the bottom two. Duncan begins to look nervous (since it is his third consecutive ceremony being in the bottom two), and Lindsay believes that, with three votes against him, she is safe. The last Gilded Chris, however, goes to Duncan, meaning that Lindsay has been eliminated. Lindsay and Beth are both confused, since three people were supposed to vote off Duncan. Chris announces that, while Harold and Beth did indeed vote for Duncan, Lindsay had accidentally voted for herself when she looked at Beth, and doesn't pay attention to who she voted for. This, along with Duncan's and Courtney's votes, ends up getting her eliminated. The castmates are shocked, and Duncan begins to laugh.

Lindsay and Beth say goodbye to one another, each of them saddened at having to be separated. Lindsay reminds Beth that friendship is forever, and thus it is more important than money, and Beth replies by saying that's the smartest thing anyone has said all season. Lindsay then leaves in the Lame-o-sine, and Chris says goodbye to the competition's "foxiest player", before signing off the episode.

Now that she has been eliminated, Lindsay states that she wants to help the poor look better by coming up with a line of facial products named after her. She also states that her products will not be tested on animals, the cute ones that is.

A deer runs off, as its startled by Lindsay's singing.

Lindsay singing the wrong lyrics to a song, very loudly and very badly.

Courtney lashes out at Lindsay for singing horribly, and singing the wrong lyrics.

"I wasn't mascaraing anything but my eyelashes, Courtney."
- Lindsay

"Three hours at the movie with that girl last night, and now this?!"
- Duncan

"I'm gonna stick a fork in my eye to relieve the pain."
- Duncan

Harold is excited about the challenge.

Duncan says he would be excited about the challenge, but he still has a headache from "Lindsaypalooza".

Lindsay is happy that Owen returns.

Owen hugging both Duncan and Harold.

Lindsay screams in agony after Chris tells her that the guitar shocks may prevent her from ever using the phone again.

Harold rocks too hard, and sets his guitar on fire.

Harold gets electrocuted after the water.

Lindsay is electrocuted for making a mistake.

...but later falls off the stage painfully.

Duncan only plays every tenth note on his guitar.

The contestants eliminated from the challenge watch Courtney's guitar playing.

Courtney shows off her guitar skills.

"Watch and learn, baby doll. Maybe one day you'll be able to rock as hard as me."
- Duncan

The "fans" that the castmates have to pass through.

Courtney celebrates her own victory.

Duncan flips off the autograph hound.

Duncan signed an autograph on a cardboard cutout groupie's belly.

Duncan kicks the bodyguard cutout in half.

Owen rolls down the red carpet.

Harold finally gets his Rock and Roll symbol right.

Harold crashing through all the cutouts after being called "Doris".

Lindsay grins as she begins her walk down the carpet.

Lindsay poses for the paparazzi.

Lindsay poses again for the paparazzi.

Lindsay kisses the bodyguard standee to get by.

Courtney ducking in her photo.

Lindsay posing in her photo.

Courtney talks about meditating in the confessional.

Beth breaks a mirror in the third challenge...

...much to Chris's satisfaction.

Lindsay jumping on the couch...

...until Owen cannonballs onto it

Lindsay's reaction to Owen landing on her.

Lindsay is disheveled after Owen lands on her.

Courtney goes absolutely psychotic during the last part of the challenge...

Lindsay, Harold, Owen and Beth deciding who they are going to eliminate.

Owen still votes for Courtney despite him knowing it won't mean anything.

Lindsay votes blindly, due to Beth distracting her.

Duncan frets at the fact that he is in the bottom two yet again.

Lindsay and Beth grin smugly at each other, thinking that their alliance will eliminate Duncan.

Duncan gets the last Gilded Chris Award, much to everyone's shock.

Lindsay is confused what Chris was trying to say as goodbye.

"Friends are worth way more than money!"
– Lindsay

Lindsay sadly walks towards the Red Carpet of Shame.

Lindsay says her final "goodbyes" before entering the Lame-o-sine.

Retrieved from "https://totaldrama.fandom.com/wiki/Rock_n%27_Rule?oldid=1621718"
Community content is available under CC-BY-SA unless otherwise noted.