Rodney (one-sided attraction, on his side)

Kristi Friday
Scarlett was a contestant and one of two main antagonists of Total Drama: Pahkitew Island as a member of the Pimâpotew Kinosewak.

Scarlett is a highly intelligent individual, with a quiet, yet enigmatic behavior. When she does speak, she tends to transcend into being very talkative. Her extensive and advanced vocabulary has a habit of confusing her teammates, and she usually is required to simplify her suggestions, much to her chagrin. Although she has an initially polite exterior, Scarlett's true nature is actually psychopathic and quite wicked, so much so that she has gone as far as threatening to kill the other contestants just for the million dollars. She has been shown to be very crafty, and can easily manipulate other people with her superior brain power. This is best displayed through her relationship with Max, whom she uses to carry out various "evil" deeds (most of which she suggests) in order to cover her true nature while Max takes the blame. Scarlett is very annoyed by Max's ways and despises him referring to her as his "sidekick," showing that she is against being second place to anyone.

Scarlett is introduced in So, Uh This Is My Team? as one of the new contestants and is placed on Pimâpotew Kinosewak. She is considered one of the smartest contestants of this season, frequently coming up with ideas and plans for challenges. For most of the season, she finds herself partnered with Max, whose "evil" deeds intrigue her. During their partnership, Scarlett often helps Max out with his inventions, as well as advising him on how to be a proper villain. Unfortunately for her, she also has to put up with his dullness. Max shows little respect for Scarlett, and views her as his inferior minion, but nonetheless finds use for her over time. After helping him during the challenge in A Blast from the Past, Max openly acknowledges that Scarlett has proven herself "un-useless" and allows her to become his sidekick. Though Scarlett does not take this news well, and growls angrily in the confessional.

Annoyed at Max for his horrible treatment towards her, Scarlett formulates a plan to get Max eliminated in Mo Monkey Mo Problems. Scarlett observes how Max is humiliated by Jasmine after he insults her, and goads Max into earning Jasmine's respect by tricking him into setting up a trap. Scarlett's hope is that Max will be deemed responsible for their team's loss, and will be voted off that night. The plan almost backfires when the entire team is caught in the trap. Luckily for Scarlett, Max foolishly reveals that he was responsible for setting it up, putting a target on him. Although Max receives the most votes that night, he is saved after Ella is caught disobeying Chris's warning from the previous episode for singing and is disqualified.

Max continues to be an annoyance to Scarlett in This Is The Pits!, who confesses that she wants him gone as soon as possible. When the two of them are separated from their team, Scarlett tries to get rid of Max so her team will lose and he will be voted off. While traversing in the cave, she realizes that its odd structure is due to the presence of stalagmites without any water. Very soon, they are attacked by a crocodile, which they discover is a robot after a stalagmite falls on it. Scarlett uses components from the broken robot to construct a universal remote and with it, she discovers a hidden elevator. Just as they are about to take the elevator and leave, Max snatches the remote and throws it away. In the confessional, Scarlett confesses her hatred for Max and how her patience is at an end. That night, Max is transferred to the opposing team, as Chris wanted to keep him and Scarlett separate, with Sky taking his place. With Max's absence, Scarlett finds she can finally relax in Three Zones and A Baby, though another team member begins to annoy, in the form of Topher. It isn't long before Scarlett loses her patience and intimidates Topher with a threat, showing that she is more than just a pretty face. Nevertheless, Topher costs them the challenge and the team votes him off.

The teams are merged in Hurl and Go Seek and Scarlett finds herself having trouble during the pre-challenge, as she admits that eating challenges are "not her thing." When the actual challenge begins, Scarlett teams up with Max again, who keeps annoying her with his stomach ache. Scarlett admits in the confessional that while she can abandon Max anytime she wants, she decides to stay with him until Sugar finds them. Only then she will abandon him while Max is captured. At one point, she discovers a hidden panel behind a tree and realizes that the entire island is artificial and there is a main computer controlling everything on it. She tries to hack the control, but she begins to suffer from food poisoning from the Juggy Chunk that they drank during the pre-challenge. To make matters worse, Max vomits on it, causing everything on the island to go berserk. With no other reason to stay, Scarlett grabs Max and continues with the challenge only for them to trip over Sugar, who had already captured Sky and Dave.

Chris finally reveals the truth about the island in the next episode and sends everyone to the control center to disable the self destruct sequence. After acquiring a map from Chris, Scarlett and Max find a hidden entrance that leads directly in front of the control room. Once Max short circuits the control panel, Scarlett enters the control room and proclaims that the island is now under her control. With the power she now wields, Scarlett removes her glasses and lets her hair down, appearing much more sinister. Scarlett reveals that the Scarlett everyone knows is just a facade and that she is actually an evil genius waiting for the opportunity to strike. After sending Scuba Bear to get rid of Max, Scarlett contacts Chris and blackmails him into giving her the million dollars or she will let the island explode with everyone on it.

Chris, at first, is not afraid of her threat until she tells him that she'll give him 'an example of the power I now have', and launches several "tree missiles" at his helicopter. Nevertheless, he still refuses to give up the money, believing that the other contestants will foil her evil plot. Scarlett expected this and lures them to a room filled with Chris' Promo Bots to dispose of them. Shawn, however, manages to destroy every single robot in the room, including Scuba Bear. The contestants are able to lure Scarlett out of the control room using one of the broken robot heads. Sugar immediately tackles Scarlett once she opens the door, and is hogtied with her own hair. After the island is safe, Chris disqualifies Scarlett and declares her the "most eliminated contestant in the series" while pelting her with marshmallows. Before she is launched away, Max immediately joins her in the cannon after Chris disqualifies him as well. Scarlett begs Chris not to fire her with Max, but Chris activates the cannon anyway, sending the duo far away from the island.

Scarlett is sitting in what appears to be a laboratory, full of test-tubes, flasks, and Bunsen burners, as well as a globe that has been stabbed by knives. She explains that her parents named her "Scarlett", a name derived from an English surname with an occupational meaning: someone who sells cloth. However, she states that she has higher expectations for her career, and that if she won the million dollars it would ensure that she could attend a university of her choice, aware of her massive potential. She also states her belief that Total Drama's popularity is responsible for today's troubled youth. She thanks the selection committee for their time before ending the video. 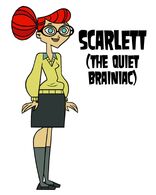 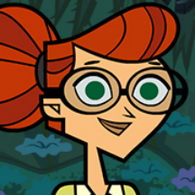 Max shows his evil invention to Scarlett in the opening theme...

...and she grins when she correctly predicts it'll fail.

Scarlett gets an actual parachute.

Scarlett and Max collecting supplies for their team.

Scarlett attempts to cheer Max up after their team wins the challenge in I Love You, Grease Pig!.

Scarlett and Max are eliminated from the challenge.

Scarlett becomes another of Rodney's girlfriends.

Scarlett puts make-up on a bear for her challenge in I Love You, I Love You Knots.

Scarlett in the bottom two.

Scarlett is sleeping in the tree house.

Scarlett devises a plan to get their coin from the monkeys.

Scarlett believes her team to be incompetent.

Scarlett's plan to turn her team against Max fails.

After discovering the crocodile to be robotic, Scarlett builds a remote from its parts...

...only for Max to throw it away after they find an exit, deeming it useless.

Scarlett has had it with Max and his stupidity.

Scarlett intimidates Topher in Three Zones and A Baby.

Scarlett forces down her Juggy Chug.

Scarlett tries to figure out how to operate a control panel.

Scarlett laughs evilly in the confessional.

"The island is mine! Mine!"
- Scarlett, seconds before revealing her true colors.

Scarlett shows Chris the power she now has over the island.

Scarlett is ironically outwitted by Max...

...and her grand scheme is finally foiled.

Scarlett is declared by Chris being "more eliminated then anyone has ever been eliminated."

Scarlett is eliminated together with Max.

Scarlett's cameo in Lies, Cries and One Big Prize.

Retrieved from "https://totaldrama.fandom.com/wiki/Scarlett?oldid=1641303"
Community content is available under CC-BY-SA unless otherwise noted.