Chris
The Screaming Gophers is one of the two opposing teams on Total Drama Island. The Screaming Gophers originally consists of Beth, Cody, Gwen, Heather, Justin, Katie, Leshawna, Lindsay, Noah, Owen, and Trent. In Not So Happy Campers - Part 2, Katie and Sadie, being inseparable, beg Chris to allow them be on the same team, and after a while, Chris allows Katie to switch to the Killer Bass. Izzy then becomes a Screaming Gopher as a result. The Screaming Gophers' logo is a green gopher standing upright with its fists drawn out. It is mounted on a pale yellow circle with a green ring surrounding it.

In Not So Happy Campers - Part 1, the team members are chosen by Chris. The Screaming Gophers had gone undefeated for the first two episodes. They seem to get along pretty well in the first challenge and their teamwork is better than their rival team. Their winning streak ends in Dodgebrawl, when the Killer Bass manage to defeat them in three out of five dodgeball matches after the Gophers have already taken the lead with two wins, losing the third and fourth thanks to Duncan's prison tactics. They lose the last match due to Harold's figure skating skills, which gives them their first loss. Noah becomes the first Screaming Gopher voted off the island, because of his refusal to help in the dodgeball match and lack of team spirit. All the way up until If You Can't Take The Heat..., the Gophers have always either tied or at an advantage in numbers.

From Up the Creek to If You Can't Take The Heat..., the Screaming Gophers lose three consecutive challenges, losing Izzy, Cody, and Beth respectively, which decreased their numbers below those of the Killer Bass for the first and only time in the season's run. This is mostly perceived as bad luck from a cursed tiki idol that Beth unknowingly had taken from Boney Island in Up the Creek, which led up to her elimination. Following Beth's elimination however, The Gophers redeem themselves by winning another three consecutive challenges up until Brunch of Disgustingness, when the teams are split up by gender temporarily and merge in the next episode (giving the Gophers a six-four advantage over the Bass), meaning that Heather, Trent, Gwen, Leshawna, Owen, and Lindsay are the only Gopher members to make it to the merge.

The two teams end in Brunch of Disgustingness; Bridgette moves to the Gophers' cabin, while Trent and Owen move into the Bass' cabin in order to have the two genders compete against each other during the challenge. Izzy returns in No Pain, No Game, claiming to have been living in the woods since her elimination and in that same episode the teams are permanently dissolved.

In Not So Happy Campers - Part 2, Chris allows one camper to switch teams, making a Killer Bass swap to the Screaming Gophers. 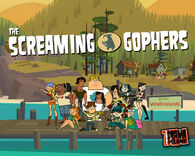 The Screaming Gophers (with Ezekiel).

Gophers are reluctant to jump off the cliff.

The Screaming Gophers cheer for Owen to jump.

The Gophers all work together in the second challenge.

Some of the Gophers cheering after they won.

The Gophers enjoy their hot tub party at night...

... with some of them dancing and singing.

The Gophers during the Awake-A-Thon challenge in The Big Sleep.

Lindsay and Beth try to stay awake during the Awake-A-Thon by standing on their heads.

Gwen wins the Awake-a-Thon for her team.

Heather does not approve of Noah's lack of activity in the challenge.

Heather makes fun of Noah getting hit by a ball.

The Screaming Gophers' reaction to Harold dodging all the balls.

The Gophers glare at Noah after he criticizes their team spirit despite not helping at all.

Heather nominates herself as team leader in Not Quite Famous.

The varied reactions of the Gophers to Owen's talent.

The Gophers spend a horrible night in the woods.

The Gophers enjoy their reward in their hot tub.

Heather does a spit take when Chris mentions her fear...

Some of the Gophers cheering for Beth after she scores the first point for their team.

The Screaming Gophers' (minus Beth and Izzy) reaction when they won the challenge in Phobia Factor.

The Screaming Gophers are surrounded by Stymphalian Canadian Geese.

Izzy leaves the competition after the RCMP found her.

The Gophers are flabbergasted by Izzy's running from the RCMP.

The designated deer for the challenge in Paintball Deer Hunter.

Tension begins to rise between Heather and the other Gophers.

Beth walks to the Dock of Shame after her elimination.

The aftermath of Trent eating the fugu prepared by Lindsay.

Leshawna and Gwen competing in the last challenge.

The Screaming Gophers win in Who Can You Trust?

Heather quits the challenge to get away from Owen's farts...

Gwen wins the army challenge for the Gophers in Basic Straining.

The Gophers in X-Treme Torture, use Owen as a cushion for Trent when he skydives.

The girls watch as Trent falls.

Retrieved from "https://totaldrama.fandom.com/wiki/Screaming_Gophers?oldid=1621304"
Community content is available under CC-BY-SA unless otherwise noted.