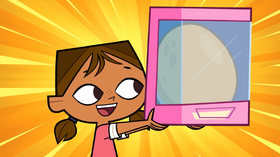 It's Show & Tell time and the teacher's pet brought a valuable collector's toy to class that she refuses to share with her friends. Finding the toy to be worth a lot, the other kids want it for themselves, but the teacher's pet will not give up her toy without a fight.

The episode opens with Chef announcing it is Show & Tell time, although Owen mistakenly thought it was lunch time. For this session it is Beth and Courtney's turn, with the former going first. Beth shows the class her collection of items that doctors have pulled out of her nose. She then tells the class about the amount of snot in her nose, disgusting everyone and leading Chef to end her turn. For Courtney's Show & Tell, she brought an extremely rare toy called an Extreme-a-Saurus, still in mint condition. The Extreme-a-Saurus is an egg-shaped toy that hatches into an interactive toy when it is removed from the box. What makes Courtney's Extreme-a-Saurus even more unique is that it is a limited edition version that hatches into a Drago-Chicken, and only twenty-three of these were produced, with each being signed and dated. This intrigues the other kids, but Courtney refuses to share her toy with her friends. Chef reminds her that today's lesson is about sharing and that "sharing is caring". Hoping that she will do the right thing, Chef leaves the class to answer the phone which is about a survey on house cats.

Despite Chef's advice, Courtney refuses to share her Extreme-a-Saurus with her friends as she plans to keep it as an investment. She believes that if the toy is still in mint condition by the time she is older, it will be worth a lot of money in which she will sell it. She will then put her life plan into motion; from moving to a school for the gifted, attending an Ivy League college, saving the whales, and becoming the president of the world. This peaks the interests of Duncan, Beth and Leshawna, all who want to steal the egg for their own selfish purpose: Duncan wants to sell it, while Beth and Leshawna want to open the box. Duncan and Leshawna try to snatch the box, but Courtney immediately hides in the castle where Beth is playing house. Beth invites Courtney to play with her and tells her to watch the stove to which Courtney does so until she realizes that Beth attempts to cut open the Extreme-a-Saurus box, so she leaves. Duncan makes fun of Beth's failed attempt and brags that he will get the box in no time.

Later on, while the other kids are playing, Duncan sneaks into Chef's office while he is still on the phone and activates the intercom, announcing that there is a fire. A panicking Chef alerts the other children to leave the daycare and rings the fire alarm. With the coast clear, Duncan believes he can now steal Courtney's Extreme-a-Saurus, only to find out that Courtney was not fooled by the facade. Chef realizes it is a false alarm and tells the kids to go back to class for their afternoon nap so he can continue with his house cat survey. While everyone else is asleep, Courtney tries to stay awake to make sure no one else tries to steal her Extreme-a-Saurus. Eventually, she dozes off and the box is stolen by Beth, only for her to be stopped by Duncan and Leshawna. After Courtney wakes up, the box repeatedly falls into one of the four kids' hands. After finally retrieving her box, Courtney attempts to hide underneath a table where Bridgette and Owen are having tea. Owen's poor attempts to lie however exposes her location to the others.

Not wanting to see her friends fight, Bridgette gives an inspirational speech on the importance of sharing, and that Courtney should be the one to decide on whether to share her Extreme-a-Saurus with them or not. Despite the heartwarming speech, Courtney still refuses to share her toy, leading to yet another struggle. However, the box gets knocked out of Courtney's arms when the three push her and Owen tries to grab it, only for the egg to come out of the box and land on the ground. Courtney becomes devastated as the egg will hatch and her life long plan will be ruined. The egg then cracks open to reveal the Drago-Chicken to the amazement of everyone. The toy, however, is not what they expected as it can only chirp. Finding that the toy doesn't live up to their expectation, the kids leave to play dodgeball. After everyone is gone, the Drago-Chicken suddenly flies into the sky and transforms into a larger version of itself playing an electric guitar before turning back to normal as the episode ends.

Izzy is playing with a set of toy blocks, when Owen suddenly runs over them while playing tag with Jude. As Izzy chases after Owen, Jude begins playing with the blocks, only for Owen to knock them over again, causing them to resume playing tag again as Izzy puts them back up.

Beth shows a collection of things doctors found in her nose.

Beth talks about the disgusting stuff doctors found in her nose.

Everyone is disgusted by Beth's story.

Chef ends Beth's turn and it is now Courtney's turn.

The kids' reaction to Courtney's Extreme-a-Saurus.

According to a commercial only kids can get an Extreme-a-Saurus.

The commercial talks about the Extreme-a-Saurus.

..but seconds later she tells Noah that she was just lying.

Leshawna got "Jack Squat" for Christmas.

Courtney doesn't want to share her toy with the others.

"Sharing is Caring!"
- Bridgette and Owen

Courtney says that they toy is an investment for her.

Duncan finds out the Extreme-a-Saurus is worth a lot of money.

Duncan imagines what his life would be if he sells the Extreme-a-Saurus.

Courtney talks about her life plans including attending a school for the gifted...

...to a prestigious college...

..and become president of the world.

Owen says he will go to a petting zoo.

Beth and Courtney play together.

..but Courtney stops her.

Duncan claims that the egg will be his.

The kids playing with toys.

..and fools everyone into thinking there's a fire in the daycare.

Chef tells the kids to freak out.

The kids start freaking out.

Everyone but Duncan and Courtney run out of the daycare.

"I knew I should have just started a real fire!"
- Duncan

The kids taking a nap.

Courtney slaps herself in order to stay awake.

Beth steals the toy from Duncan.

Courtney finds out her Extreme-a-Saurus is missing.

Duncan uses a toy to steal the Extreme-a-Saurus from Beth.

Leshawna hits Duncan with a ball..

..and steals the Extreme-a-Saurus from him.

Courtney gets her toy back.

"Sharing is.. GET BACK HERE!"
- Leshawna

A montage of the kids constantly stealing the Extreme-a-Saurus from one another.

Owen accidentally tells the kids where Courtney is hiding.

..and ask her to share her toy with them.

Bridgette thinks that it's Courtney's decision if she wants to share her toy with others or not.

Everyone but Duncan think Bridgette's speech was inspirational.

Courtney still doesn't want to share her toy with the others.

Owen tries to catch the Extreme-a-Saurus but fails.

The Dragon Chicken gets out of the egg.

Duncan's reaction to the Drago-Chicken.

The kids think the Drago-Chicken is lame.

Courtney asks the others if they want to play dodgeball with her.

After the kids leave, the Drago-Chicken transforms into a cooler looking toy.

Retrieved from "https://totaldrama.fandom.com/wiki/Sharing_is_Caring?oldid=1602250"
Community content is available under CC-BY-SA unless otherwise noted.