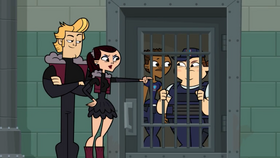 The teams travel to one of the most dangerous prisons in Australia, where they must escape and float down a river to the next Chill Zone. Someone is determined to win to be able to speak to someone, but in the end gets dumped by their love, leaving an opening for a doubter to work with; while two rivals finally bond with one another. Meanwhile, the four greatest rivals end up trying to take down each other, only to work together in order to survive their ordeals. While one squad appears to have the upper hand, the other gets another shot through a non-elimination.

The teams get their next Travel Tips and head for Harare International Airport to take a flight to Melbourne, Australia. As the teams board the bus, they have to wait for the last place team in the previous episode, The Ice Dancers, to board. The Ice Dancers reveal their new black attire, intending to intimidate the other teams, as well as signifying their change in attitude. All the teams board the flight, where Don informs the contestants about "boomerangs" which can be used to force a team to redo a challenge, and can be found attached to certain Travel Tips. Sanders tries to think strategically about using the boomerang, but MacArthur is determined to use it on the Ice Dancers without any doubt. Carrie tells Kitty that she has finally decided to confess her feelings for Devin. This leads Kitty to try and push Emma into telling Noah her feelings for him, though Emma affirms she'll tell him after the race.

After the teams arrive at Australia, Don explains the challenge. In the challenge, teams have to head to a maximum security prison in Geelong, where they will be locked into cells and must try to escape by using the four methods, which are tunnels, trap doors, tools, or bars. They must then head for the Barwon River where they are free to use their boomerangs and after that point, the boomerangs expire and can't be used. The first team to finish will also win a phone call home which makes Devin ecstatic at getting the chance to call Shelley, making Carrie worried. The Ice Dancer get a boomerang attached to their Travel Tip. In the Best Friend's taxi, Carrie tries to express her feelings for Devin, but he is too distracted by the taxi erratically passing by traffic to notice. Over in the Cadets taxi, Sanders tells MacArthur if they win the phone call, she would like to call her grandmother who's been sick, but MacArthur just wants to call her pet cat and insists on flipping for it. Upon arriving to the prison, all teams are handcuffed, thrown, and locked into cells.

The Stepbrothers continue bickering, and decide to come up with a plan. They decide to say their plans at the same time, and to their surprise, they have the same idea: trick the guard by putting a mirror inside their cell, to make the guard think he is inside the cell and unlock the door. Soon, they realize they have similar taste in movies and video games, beginning to bond for the first time. As the two continue to bond, they accidentally discover a trapdoor underneath the bunk beds when Lorenzo hops onto the top bunk, causing them to fall down the trapdoor and become the first team to break free out of their cell. In the Ice Dancers' cell, Josee gets a claustrophobic attack, and in her panic manages to break through the bars and escape from the cell. Sanders tries to convince the Ice Dancers to help break the Cadets out, in exchange for a favor. Josee agrees on the condition that MacArthur compliments their sport. MacArthur initially refuses, but after some insistence from Sanders finally complies. However despite doing as Josee asks, the Ice Dancers do not hold up their end of the deal and leave the Cadets behind, much to anger of MacArthur who opens the bar window, finding an escape route. For the Best Friends, Carrie continues to try and tell Devin about her feelings for him, but he’s too distracted trying to find a way out of the cell and doesn't hear her message. In the Reality TV Pros' cell, Owen finds a trapdoor hidden under the toilet. Just as Noah is about to say that they are not escaping through the sewer, Emma and Kitty break into their cell and the four of them escape through the sewers much to their disgust due to Owen using the toilet earlier.

The Stepbrothers are the first to arrive at the Don Box for the next challenge, an All-In. The All-In challenge involves the contestants to build a raft and sail it down the river to the Chill Zone. Due to the Stepbrothers taking time to role-play and making a theme song, the Best Friends manage to pass them with ease. The Ice Dancers get to the other Don Box, but Josee trips over a rock to which she falls face first into the mud. The Police Cadets show up and MacArthur laughs at Josee for falling in the mud. Both the Ice Dancers and Police Cadets reveal their boomerangs, which they aim at each other. Josee offers to rip the boomerang in half as long as the Cadets rip theirs. Sanders offers to do it on a count of three, but both do not rip the boomerangs, leading it to be a lie. Both teams then boomerang each other despite Sanders trying to defuse the situation, they are sent back to the previous challenge, where all four are placed in the same cell called "the black hole". The two teams form a temporary alliance and look for a way out.

Meanwhile, Carrie and Devin arrive in first place and win the phone call home. Devin tries to call Shelley, but she doesn't pick up right away and he keeps trying to call her over and over. Carrie desperately tries to confess her feelings once more. The Stepbrothers come in second, after their ship is destroyed. In the cell that the Ice Dancers and Police Cadets are in, they use a trapdoor that Sanders discovers in the ceiling. Both the Ice Dancers and Police Cadets manage to escape, build their rafts, and race down the river. As more teams finish, Devin finally gets through to Shelley, only to find out she has dumped him for her tennis instructor Ashton, sending him into devastation. Carrie decides to hold off on her confession and wait. As the Cadets and Ice Dancers approach the finish line, Josee uses her oar to knock the Cadets off their raft, securing tenth place for the Ice Dancers. As the Cadets sulk over their loss, Don reveals it is another non-elimination round, prompting them to celebrate while vowing to get revenge on the Ice Dancers. Carrie tries to console a sobbing Devin as Don signs off the episode.

The Cadets are happy to go to Australia.

The Ice Dancers show off their new black attire.

Josee explains their new outfits are intended to intimidate the other teams.

Junior tells Dwayne not to get separated and lost again.

Don awakens the teams by announcing the Boomerang.

MacArthur is determined to use the Boomerang on the Ice Dancers.

Kitty is pleased that Carrie has decided to confess her feelings.

Carrie tries to confess her feelings to Devin but fails.

The Ice Dancers get a boomerang.

The Best Friends are the first team to get "arrested".

Sanders asks MacArthur to stop insulting people for a moment.

Chet has the same interests as Lorenzo.

Lorenzo has the same interests as Chet.

Noah asks Owen to "hold it".

The Stepbrothers try to carry out their plan by asking for a mirror.

The Stepbrothers laugh at Chet falling over.

The teams struggle with the challenge.

Josee reveals that she has claustrophobia.

The Ice Dancers have found a way out.

MacArthur is forced to compliment the Ice Dancers.

Josee tells the Cadets she tricked them.

Carrie reads a letter that she wrote to Devin...

...but he does not listen and finds a way out.

The Sisters break into the Reality TV Pros' cell.

The Stepbrothers read the next Travel Tip.

MacArthur rips the cell window out.

The Sisters and the Pros in the sewer.

The Stepbrothers waste time role-playing and make a theme song...

...allowing the Best Friends to overtake them.

More teams are working on the challenge.

Josee trips and lands in the mud.

Josee throws mud at MacArthur after laughing at her.

Josee wants to use the Boomerang...

Sanders and Josee use the boomerangs on each other...

...and Jacques acts as if he was shot.

The Cadets and the Ice Dancers need to do the challenge again.

The Best Friends are the first team to make it to the Chill Zone.

The Stepbrothers get second place. 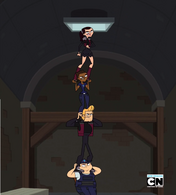 The Cadets and the Ice Dancers have found a way out.

Father and Son arrive in third.

The fourth through sixth...

...and seventh through ninth placing teams.

The Police Cadets and Ice Dancers confront each other.

The Ice Dancers and the Cadets are racing to the chill zone.

Devin cries after Shelley dumped him.

Josee knocks out the Cadets.

The Ice Dancers get tenth place.

Due to being a non-elimination round, the Police Cadets gets to stay.