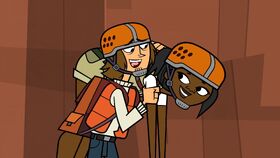 Make it to the top of "Mount McLean" first

Food from the Prairie Oyster Palace

Jasmine
The final four contestants compete in a race to the top of a mountain where the last person to cross the finish is sent home. Two girls make a temporary alliance to take out the other two, but one goes back on her word. Meanwhile, one half of a newly-formed relationship is hesitant to split the prize money with his significant other should they win, due to his longstanding fear. In the end, three players cross the finish line, while the fourth is sent flying off the island due to one's accidental sabotage.

The episode begins with Sky and Sugar, who has now moved into Pimâpotew Kinosewak's treehouse, conversing. Sky notes how close Jasmine and Shawn are because of their relationship and reasons that her best chance to stay in the game is to form an alliance with Sugar. Sugar agrees to her proposition but declares that she is not above cheating. However, Sky firmly forbids it and makes Sugar promise that she will play fairly. Meanwhile, Shawn has taken Jasmine out on a romantic picnic. As they talk, Jasmine also suggests they form an alliance and split the money, to ensure they both would get a share. However, Shawn is reluctant of this proposition, revealing in the confessional that he needs the full million to complete his zombie-proof bunker. Chris then calls the final four to the challenge, at the base of "Mt. McLean," and explains the challenge to them, called "Mount Everfast." The challenge is to race to the top of Mt. McLean and reach the flag first, and whoever reaches the flag last is automatically eliminated.

As the final four race up the mountain, Sugar falls behind and pulls Sky with her, while Jasmine and Shawn gain the lead. Chris then unleashes a group of killer crocodiles, which quickly gain on Sugar and Sky. Meanwhile, Jasmine reveals her plan for her share of the money: a flower shop and cage-fighting school mixed into one, an idea that Shawn strongly disapproves of as he considers it to be ridiculous. Just as Jasmine and Shawn reach a lava-filled gap with several pillars along the way, the crocodiles arrive and close in on them. Shawn is so terrified by the crocodiles that he actually freezes in terror, to which Jasmine has to kiss him on the cheek in order to snap him out of it. They quickly begin crossing the gap, with Shawn slipping on the first platform when it's revealed to be greased. Just as he falls off, Jasmine catches him by the ankle and saves him. When they reach the other side, Chris unleashes a swinging log that hits Jasmine in the head and knocks her off the edge, only for Shawn to save her by grabbing her hand. However, Shawn must carry the dazed Jasmine on his shoulders afterward. Sugar and Sky finally arrive at the gap, with Sugar effortlessly crossing the gap without even looking down, while Sky lassos the swinging log and uses it to get across quickly. Just as Shawn finally collapses under Jasmine's weight, they reach the climbing portion of the challenge. Meanwhile, Sugar and Sky pass by a cave and decide that they must cross through it as a shortcut in order to catch up to Shawn and Jasmine. Just before they reach the other side of the cave, they realize that they are surrounded by a crowd of sleeping robotic bears, which Chris quickly wakes up over a monitor. Sugar then unleashes a fart that she has been building up over the entire episode, with the gas short-circuiting the robots, burning off their fur and causing them all to explode.

Just as Jasmine and Shawn are about to reach the top, and Shawn prepares to explain to Jasmine why he can't split the money, Jasmine's pick breaks off a portion of rock and she falls past Shawn. Her backpack is snagged on a tree branch, while Shawn is still on the wall. Shawn tries to climb down to save her, but she insists that he goes on without her and cross the finish line first. Her strap then breaks, and she falls right on top of Sugar and Sky. Shawn reluctantly continues on and reaches the flag, only to be attacked by the crocodiles, which are revealed to be robotic as well. Shawn defeats all but one, which eats him just as he grabs the flag. However, Shawn fights back from the inside, causing it to go haywire and dance around before it explodes, thus leaving him as the winner.

The three girls realize that there are only two spots left for the final three, and they race against each other. Sky continues trying to push Sugar along, but just as Sky begins to push harder when Sugar stops, Sugar steps aside so that Sky falls forward and goes right off the edge of the cliff. However, Sky lands on a flying crocodile and rides it right to the top, coming in second place. Jasmine quickly pulls ahead of Sugar, but when an exhausted Sugar leans against a tree, it falls over and crushes Jasmine. Sugar uses this to her advantage and races on ahead, claiming the final spot in the final three and eliminating Jasmine. At the elimination ceremony, Shawn requests one final romantic dinner with Jasmine, which Chris denies. He is regretful about Jasmine's elimination, but Jasmine encourages him to win it for both of them. They share one final kiss before Jasmine is blasted away, and Sugar unleashes another unpleasant fart as Chris tries to sign off the episode, causing him to pass out.

Chris in the recap with the final four.

The interns attempt to thaw Sasquatchanakwa out.

Sugar and Sky form an alliance.

Sugar eats cabbage as she struggles to fart.

Shawn after Jasmine suggests they split the prize money.

Sugar references Max and Scarlett by name, to Chris's annoyance.

The first three to be at the top and get the flag are the three finalists.

Sugar is happy to be slowing Sky down.

A bunch of robo-crocs approaches.

The crocodiles surround the girls.

Sugar and Sky try to save themselves.

When the crocs leave, Sugar falls on her nose...

...which is revealed to be her most sensitive part.

Jasmine talks to Shawn about her life's dream.

Jasmine and Shawn have to cross a dangerous zone.

Jasmine and Shawn are scared by the crocodiles.

The crocs approach once again.

Shawn screams when he sees the crocodile robots...

...and becomes frozen in terror.

Jasmine kisses a paralyzed Shawn to wake him up.

Jasmine is rescued by Shawn.

Shawn and Jasmine take one way.

...and they develop strange skills.

Sugar crosses the bridge without even looking.

The two girls successfully reach the other side.

Sky and Sugar reach a cave.

The crocodiles are revealed to be capable of flying.

Jasmine asks him if he is okay...

...and the camera reveals that he is hanging onto her.

The cave is shown to be the home of many sleeping bears.

...and lands on the other two girls.

Shawn notices that the robo-crocs are there.

Shawn gets the flag...

Sky pushes Sugar along as the race draws to a close.

Despite Sugar's betrayal, Sky lands on a robo-croc...

...and flies to the finish line.

Sugar pushes a tree on top of Jasmine...

Jasmine tries to lift up the tree.

Sugar puts make-up on one of the crocs, annoying Chris.

Jasmine and Shawn share a moment before her elimination.

Jasmine and Shawn kiss before she leaves.

Jasmine in the Cannon of Shame, moments before she blasts away.

Retrieved from "https://totaldrama.fandom.com/wiki/Sky_Fall?oldid=1633996"
Community content is available under CC-BY-SA unless otherwise noted.