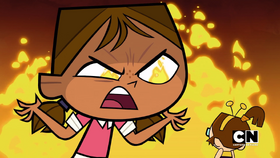 The teacher's pet brought in a diorama for Show & Tell but a classmate's bad habit caused her one of the furniture. The kids try everything they can to get the missing piece back before class starts.

The episode starts with Courtney walking into the daycare carrying something heavy (her Show & Tell) to class. Bridgette questions her (Courtney) if she just pulled it all the way from home. Courtney answers with a "yes". Beth, in the Confessional, mentions that Courtney's the best Show & Teller.

At the top of the treehouse, the kids take turns to slide down to the sand pit. The camera shifts to the bottom of the slide showing the person leaving it; Duncan, Noah, Courtney, Izzy, a goldfish inside a bowl, Owen, a pizza box, Gwen and finally a bear which shocks everyone except Owen who is eating the pizza.

"Did you pull this all the way from home?"
- Bridgette

Courtney brought a goat to the daycare.

The goat starts screaming and runs out of the daycare.

Bridgette wants to know what's under the sheet.

Courtney doesn't want to show what's under the sheet because it would spoil the surprise.

Bridgette begs Courtney to reveal what's under the sheet.

Courtney reveals what's under the sheet.

Courtney describes her dream doll house to the kids.

Courtney notices that the couch disappeared.

Courtney asks Bridgette if she knows where her couch is.

Beth reveals that she stuck Courtney's couch up her nose.

Courtney thinks her couch must be in the daycare.

.. and hides from the kids.

Courtney's couch is not in Owen's chips bag.

Courtney's couch is not in the sandbox.

Courtney's couch is not in the toilet.

Izzy found herself a new friend..

.. and called her Linty.

Noah gets creeped out by Izzy.

Courtney begins to cry after the kids tell her that they couldn't find her couch.

All the things that are currently inside Beth's nose.

Courtney doesn't want to show her doll house because it's not complete.

Courtney walks away while crying.

Beth accidentally tells the kids that she stuck Courtney's couch up her nose.

Bridgette wonders how did Courtney's couch end up in Beth's nose.

A doctor tells Beth to stop putting things up her nose..

.. because she's running out of room up there.

Beth tries to pick out Courtney's couch but is unable to find it.

Bridgette wants Beth to blow Courtney's couch out of her nose.

Courtney rearranges the furniture but still doesn't like the way her house looks.

Courtney searches for her couch outside the daycare.

Courtney starts getting angry for being unable to find her couch.

Courtney starts destroying things that were outside the daycare.

"Those darn teenagers are leaning on my car again! I'm coming Betty!"
- Chef

Beth begs the kids to help her out.

Harold tries to pick Courtney's couch out of Beth's nose.

Bridgette tries to get Courtney's couch out of Beth's nose by using a toilet pump.

Cody has an idea as to how they can get Courtney's couch out of Beth's nose.

Cody cleans out his nose strills.

The kids are terrified by Cody's action.

Beth uses a hose to clean out her nose strills.

Beth's head gets filled with water.

Gwen sees Courtney in her chair.

Courtney begins to understand why Gwen likes her chair so much.

Gwen wants Beth to fix what she created because she doesn't like sharing her chair.

Chef cleans up his office.

Beth asks for help from Chef.

Chef tries to get Courtney's couch out of Beth's nose.

Chef tells the kids that Show & Tell will be in 5 minutes.

Beth asks Courtney if she's getting ready for Show & Tell.

Courtney decided that it's okay if her Show & Tell isn't perfect.

Izzy warns Beth that it's not a good idea to tell Courtney the truth.

Beth tells Courtney that she stuck her couch up her nose.

Izzy tells Beth that she should have listened to her.

Gwen asks Beth if she ever tried sneezing.

Gwen filled a bucket with everything that make people sneeze.

Izzy gives a feather to Gwen.

Noah covers Gwen's mouth so she won't tell Izzy that Linty is a dead bird.

Beth about to sneeze.

Owen gets his money back.

Harold gets his ninja toy back.

Chef gets his watch back.

Courtney gets her couch back.

Courtney shows her ultimate dream doll house to the kids.

The kids as they watch Courtney's Show & Tell.

The hot dog reunites with the crayon in Beth's nose.

Retrieved from "https://totaldrama.fandom.com/wiki/Snots_Landing?oldid=1589535"
Community content is available under CC-BY-SA unless otherwise noted.