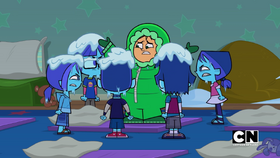 The nice kid buys a new snowsuit and wants the other kids to like it, but ends up annoying them instead. But when the new class pet and the daycare are in trouble, will he stand up to save the day?

Harold and Izzy compete against each other in a Breath Holding competition, in which the latter won after Harold passes out from lack of oxygen.

Jude tells Lenny what happened to the previous Richard Swimmins.

"So glad you came to stay with us on such a sunny day!-"
—Beth to Lenny

The weather suddenly changes and the kids get covered in snow.

Cody wants to build a snowman.

Courtney thinks they should all go inside because none of them are dressed for the weather.

Owen shows his new snowsuit to the kids.

And then sings about his new snowsuit.

Chef asks the kids where did the snow come from.

Chef orders the kids to get inside the daycare.

Chef closes the daycare's door before Lenny could enter.

Noah tells Owen that he can take his snowsuit off now.

Owen refuses to take his snowsuit off as it's his first brand new suit.

All of Owen's other snowsuits were hand me downs from his cousin.

But her family had moved to Florida.

Owen describes his snowsuit to the kids.

"Okay kids, you know what the first snowfall of the year means!"
- Chef

Beth thinks the first snowfall of the year means Harold getting his tongue stuck to a pole.

Chef tells the kids that it's time for them to decorate for the holiday.

Owen tells the kids that he will wear his snowsuit all day long.

Bridgette and Richard Swimmins get scared by one another.

The kids tell Chef that they're covered in paint thanks to Owen.

Owen can't take his snowsuit off of him.

Chef tries to help out Owen.

Chef gets his fingers broken.

"Owen, that snowsuit is the worst!"
-Beth

Chef tells the kids that it's nap time.

Then the other kids are then left freezing.

Courtney breaks out of an ice cube.

The kids think it was Owen who opened the window.

Duncan asks Owen if he opened the window.

With a polar bear in the daycare.

The kids stop freezing thanks to Courtney.

Owen begs Courtney to open up the window.

Courtney comes up with a solution that works for everyone.

Courtney kicks Owen out of the daycare.

Owen notices the kids being happy.

Cody plays with the polar bear.

Harold tells everyone that Lenny is missing.

Courtney tells Bridgette to hold it together because she's a big girl.

Beth realises that she forgot Lenny outside.

Beth and Harold argue over who should go after Lenny.

Beth, Noah and Harold accidentally get covered in snow.

Bridgette wonders who should go and rescue Lenny.

Owen plays poker with a penguin.

Owen hears the kids calling for his help.

The penguin looks at Owen's cards.

Bridgette and Courtney apologize to Owen and tell him that they need his help.

"This looks like a job for Super Snow-en!"
- Owen

Lenny gets turned into a giant snowball.

Courtney thinks the giant snowball will crush them like a pancake.

Owen protects the kids from the giant snowball.

The kids cheer for Owen after he saves Lenny.

Lenny goes inside Owen's snowsuit to warm himself up.

Noah thinks Lenny is now trying to find a way out of Owen's snowsuit.

Lenny gets out of Owen's snowsuit.

Retrieved from "https://totaldrama.fandom.com/wiki/Snow_Way_Out?oldid=1644887"
Community content is available under CC-BY-SA unless otherwise noted.